Melbourne Water and REALMstudio head a collaborative effort to reimagine our waterways as valuable urban and ecological corridors, breaking free of the overengineered water management legacies that viewed the city as a drain.

It is not often that a landscape architect, or a community, is given the opportunity to redesign a waterway. In an urban context, these linear landscapes are often seen simply as drains, but in actuality they can provide an invaluable lifeline for wildlife, vegetation and people. The ‘Reimaginging your Creeks’ project, recently recognised by the Australian Institute of Landscape Architects Victoria with an Award of Excellence, is a collaborative effort from Melbourne Water, REALMstudio, Alluvium, E2DesignLab and Mosaic Insights that looks to return life and liveability to some of our paved waterways.

The 20th century was witness to an engineering movement that swept across Melbourne’s dynamic catchments, reducing complex systems of rivers, creeks and tributaries into a simpler ‘grey infrastructure’ of concrete channels and drains. Waterways were seen as a way to move water out of the city as quickly as possible. Thankfully these views are beginning to change, with waterways now being valued as crucial spaces to integrate our urban and natural systems.

‘Reimagining your creek’ is one example of a project that is re-evaluating our approach to water management. It represents a change in how we are viewing the city and how we can better see, feel and listen to Country in the work of contemporary landscape architecture. Central to this approach is understanding the fundamental role water plays in Country: the way it flows through the landscape, hydrates and nurtures the environment.

“Naturalisation is a growing initiative in contemporary urban planning that has the potential to deliver better outcomes to our waterways than just drainage alone.”

The project also represents a cultural shift within Melbourne Water. As the statutory agency responsible for all water management across Melbourne’s catchments, it is now reviewing how it can improve waterway health to better meet the needs of the contemporary city. Following its commitment to “enhancing life and liveability”, Melbourne Water has turned its focus to the naturalisation of the concrete stormwater systems inherited from last century.

Naturalisation is a growing initiative in contemporary urban planning that has the potential to deliver better outcomes to our waterways than just drainage alone. As opposed to restoration, naturalisation is a pragmatic approach to return natural systems and experiences to our landscapes, while working within the constraints of a working city. It is a negotiation between our structured urban systems and natural systems in movement.

‘Reimagine your creek’ redesigns a series of urban creeks to ‘naturalise’ them, and reveals how Country benefits from slowing water down as it moves through the city. Gone are the days of straight-lined concrete channels taking this valuable resource on the fastest route to the bay. Design at Blind Creek places emphasis on moments for the community to engage with nature. As Jenny Butcher, one of the environmental engineers responsible for the project at Alluvium says, “When designing a naturalistic system, you can lengthen the flow path by flattening the bed grade.” In non-professional terms, that leads to a waterway with natural meanders instead of straight concrete channels. These meanders result in gentler, less erosive flows which helps hold water in the landscape in soils and plantlife.

Naturalisation can also bring much needed open green space to communities which might otherwise be underserved in this regard. ‘Reimagine your Creek’ targeted four creeks in lower socio-economic areas of Melbourne that have traditionally been deprived of open space. Altogether, this project has seen human life flow back to over five kilometres of waterways previously underutilised by their communities.

“A key part of the work was to get people to slow down, to stop and connect with nature,” – Neil Featonby

Critical to the transformation of these waterways was extensive consultation with their surrounding communities. Neil Featonby, Melbourne Water’s Program Manager for the ‘Reimagining Your Creek’ says, “Consultation takes time and effort, but it comes with much more of a guarantee.” These sessions were able to receive a wider range of feedback through running in-person engagement processes alongside Melbourne Water’s digital platform, ‘Your Say’.

What the consultation process revealed was a community desire to engage with water: to hear it and see it flowing, to touch and smell it. The community wanted a waterway that looked like a natural waterway, not like a drain. They wanted nature to come to the city. “A key part of the work was to get people to slow down, to stop and connect with nature,” says Featonby.

REALMstudio’s design recreated ecological and hydraulic features that provide opportunities for the community to connect with water . One symbolic feature of one creek naturalisation, says Featonby, was the introduction of stepping stones, leading people down into the creek bed and across it. Water was forced between the rocks to hurry and rush with trickles, riffles and ripples; creating an audible and visual experience. Shelter at the heart of the Arnolds Creek project provides a place to host educational sessions for nearby schools. 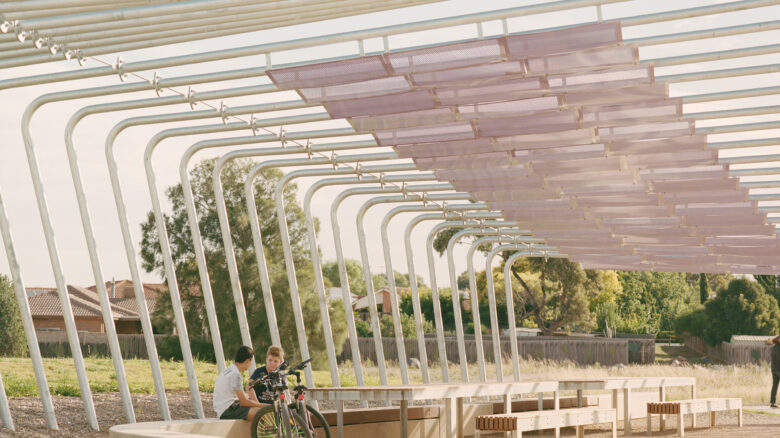 The large pergola structure was added to the brief after Melbourne Water undertook community consultation.

Life and activity has been quick to return to the waterways since the completion of the project. Founding director of REALMstudio Jon Shinkfield reflected on the transformative changes seen at Arnold Creek since his first visit, with humans and non-humans alike finding their place in the naturalised section. Where once not even the expected chorus of birds sounds were to be found, frog croaks ripple out in the background while a steady trickle of joggers can be heard deep in conversation.

One of the surprises of the Arnold Creek site was that despite the years of savage mowing, native grass species persisted. A simple design move to end the routine chop saw these species spring back to life. “An underlying ecological structure was released by the project,” Shinkfield says. “There are deep lines of ecology that reside around waterways, under the surface of the built landscape, that keep wanting to come to the surface.”

“One of the exciting things about these projects is that they are dynamic. We can manage water, but over time it will dictate its own expression,” says Shinkfield. Although the course of the waterways has been fixed by engineering, the design approach supports movement and change to occur over time, particularly with visitor engagement with the landscape.

Some species will come to the fore in wet seasons, and in drier seasons, others will come to dominate. “The creeks themselves will become vehicles for seed movement,” says Shinkfield.

Plantings are intentionally complex mosaics, with arrangements intended to continue evolving over the coming years. While some species populations will shift from year-to-year, others will be quick in establishing a short-term dominance. Movement in these creeks is about much more than water.

‘Reimagining Your Creeks’ is an exciting project deserving of recognition. The designs that have been completed here will set the tone for more ambitious projects to follow. That ambition has already been supported by Melbourne Water’s Healthy Waterway Strategy and by customer surveys.

Water is a fundamental and dynamic element of Country that needs to be recognised, especially in our urban environments. As Shinkfield says, “There is such power in the Australian landscape; we have to release that.”

The achievements of the ‘Reimagining your creek’ project were recognised by AILA Victoria’s 2021 awards, winning an Award of Excellence for Infrastrcuture

Andrew Kelly is the Yarra Riverkeeper and a member of the Birrarung Council.