At a time of mass extinction and biodiversity loss, zoos play an increasingly vital role–from research and breeding programs, to exciting our wonder at the beauty and richness of the animal world. Zoos help species preservation in multi-faceted ways, just as we increasingly recognise that healthy cities are more-than-human.

For over five years, Adelaide-based landscape architecture practice Wax Design has been working with Zoos South Australia to improve their zoos for both animals and people.

A conservation charity with over 45,000 members, Zoos SA comprises Adelaide Zoo in the city’s surrounding parklands, and Monarto Safari Park, an hour from the city. The charity’s Welfare Charter outlines a rigorous commitment to ongoing assessment, management and improvement of animal welfare. 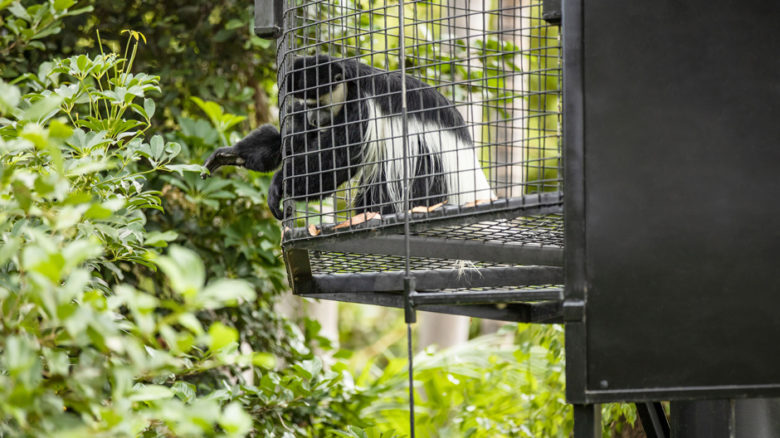 Adelaide Zoo is home to three Black-and-White Colobus monkeys, which are native to Africa. This 'Colobus Crossing' extends from the monkey's habitat along a stretch of the zoo's main lawn. 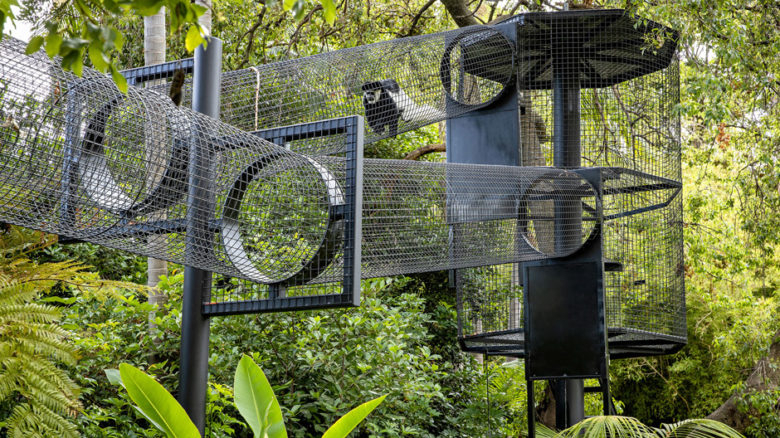 The tunnel replicates routes traveled by the monkeys in their natural forest habitats.

However, putting visitor experience second to animals also improves human experience, as we no longer watch from outside but are guided to empathise and view behaviours from the animals’ perspective. Wax’s latest award-winning project for colobus monkeys is an example of commitment to animal welfare that also offered a radically different visitor experience.

“It’s less about viewing animals in an enclosure than making us aware of their experience while they make decisions about their own environment, bringing that level of immersion to our own experience,” explains Balmer.

Enabled to monkey around

As Wax were completing work on the Children’s Zoo, Jeff Lugg, General Manager of Operations, came to them with a new opportunity. The zoo’s three colobus monkeys were housed at a far enclosure with limited visibility and needed an upgrade. As there had already been an experiment with an elevated walkway for the small Golden Tamarind monkey, the zoo realised this could offer possibilities for expanding space for other monkeys.

There were few precedents for such extensions. Philadelphia Zoo is the oldest in America and, like Adelaide Zoo, is a small, constrained urban site. The first stage of their ‘treetop trail’ for small primates was opened in 2011 based on John Coe’s ideas for a series of interconnecting trail networks to expand their enclosure. Based in Australia, Coe is a global expert in zoo environments and Wax had participated in some workshops with him.

Putting visitor experience second to animals also improves human experience, as we are guided to empathise and view behaviours from the animals’ perspective

Project landscape architect Corey Brown said that they were quickly excited by the possibilities of a run of mesh tunnels. “It grew into an idea that the monkeys would be above you and fly through the trees.” This worked well with the principals of the charter: having animals as a dominant species literally above people so that they feel safer and in control of their habitat, along with increased choices about where they can go.

Siting for this new asset needed to consider the existing ones, including a stage show by a central lawn, garden beds and large trees that the monkeys could go through beside the open lawn space. “That’s where we started and we plotted it out,” describes Brown. “I had a prototype of a pipe and we walked through the bush with a piece of string and tried to see how it would work.” They also built a full digital model of the space, keeping all existing trees, working with CPR Engineers to see how far the limits of ground supports could be pushed relative to the tunnel diameter and mesh type.

For detailed design, Wax researched the size of the mesh for the monkey’s paws, how the three colobus sometimes needed to be separated and sometimes not, and how the tunnels could be maintained and accessed. There was an unusual further consideration, too.

“One of the interesting things is that one of the monkeys is a hermaphrodite and that’s the primary reason there are two tunnels,” Brown confides. The initial design had a single tunnel but if the monkey decides it wants to be male or female, its behaviour changes and it needs to be separated. ‘Air locks’ were developed linking two tunnels. “They can all still run backward and forward but they are separate, giving the illusion that they were together in the trees.”

Budgets are a constant challenge. Wax looked for everyday materials that could be modified and worked on by people without specialist skills rather everything coming to site pre-fabricated by contractors. “The actual mesh for the tunnels came from just using flat sheet weld mesh,” Balmer says. “We made prototypes to test how workers could roll the sheets and create the tunnels and that set a precedent for elevated projects they began to consider for other animals.”

That old saying never work with kids and animals – well that is every zoo project!” —Amanda Balmer

There was also the matter of planning approval.  Elevated structures potentially have people walking underneath and council had not approved anything like this before, “so they went for maximum concern around everything,” shrugs Balmer. “No-one’s going to be swinging off it—but they could so…”

And then monkeys also grab and throw things. And pee. “That old saying never work with kids and animals – well that is every zoo project!” laughs Balmer, reminding us that their first projects with the zoo transformed visitor experience for the young.

The Adelaide zoo has a strong policy focus on children. They are the first zoo in the world to be an accredited Duke of Edinburgh’s International Award Centre, empowering young people to explore their full potential and place in the world. ‘Education for life’ encompasses learning at all ages from babies on, but has a special interest in children with a wide range of programs that include ‘Zoosnooze sleepovers’ on site. “Primary school kids sleep in tents at the education bio-dome and on the roof – my kids have done it,” enthuses Balmer.

Wax’s award-winning Nature’s Playground, completed in 2015, was seen as the first project to help bring families and also help zoo funding. “The masterplan wanted to resolve the issue that the playground was originally on one side of the zoo and the old children’s zoo was way down on the other side,” say Balmer. The aim was to join a playground to the petting zoo and create a family precinct where both could be reinvented beyond just being upgraded. 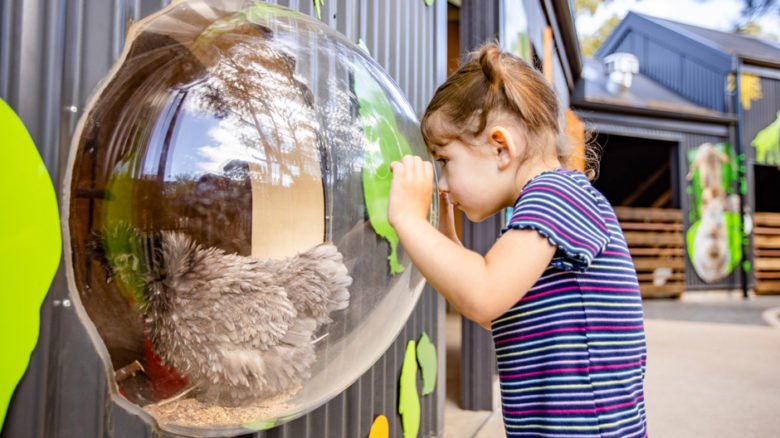 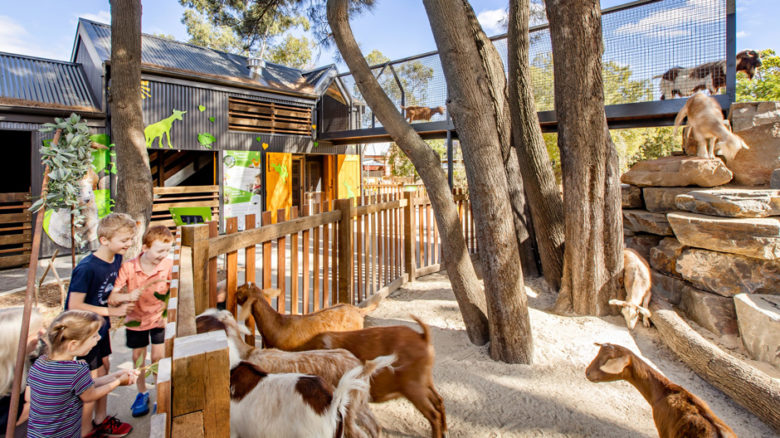 The playful goats in the Children's Zoo could bowl a toddler over, so are now artfully contained by a fence. The Children's Bridge at Adelaide Zoo. 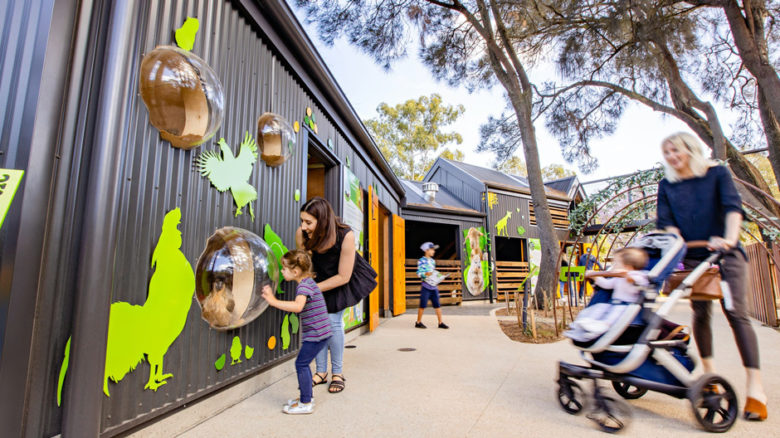 The Children's Zoo is used to talk about environmental impact and climate change, as well as the animals.

Nature play engages children directly with the environment as animals engage with theirs. A rock-lined creek with tadpoles features among water spouts and a giant sand pit, musical chimes and cubby building. A custom elevated walkway with access for all literally offers new perspectives on the zoo and surrounding parklands.

While connecting people to nature is an underpinning philosophy, this means more than just connecting with wild nature. “They use the Children’s Zoo to talk about urbanisation and climate change impacts,” says Balmer “including how animals are adapting to forestry and farming, how that is impacting small native marsupials and how they are adapting to urban environments.”

The recent completion of the Children’s Zoo adjacent to the playground is in two halves. One is farmyard where children can observe and interact variously with goats, chickens, guinea pigs and rabbits. Balmer recalls working closely with all the keepers to review what had been working and what wasn’t so successful. “There had been conflict with the goats—you’d go to the petting area and try to feed the goats and they’d just bowl a toddler over—so we completely changed how you get access to the goats so you can feed and pat them from behind a railing fence.”

But, as with all projects, getting the care and choices right for the animals themselves was critical.

“We made a two-storey barn for the goats so they could choose whether they go up or down,” Balmer offers matter-of-factly. “They can see out from up there and they get their own tunnel that connects from the barn to the rock mound so that they can be inside or out, up or down, in sun or shade—and also play on the see-saw which they love!”

Interestingly, if the animals have more experiences, humans too can experience more. Different humans, including those in a wheelchair or on the autism spectrum, have different points of access and experience as well. You can be underneath the goats and look up and there is something to see, or be on the nearby elevated walkway and on the same level as the goats.

The southern farmyard experience transitions to the northern half which is for small native marsupials. An open lawn and amphitheatre space allows for events and presentations and link to the old froggery, repurposed as an animal nursery. The north is then transparently fenced ‘bushland’ with quokkas and other smaller Australian animals. Here it is about observing and discovering rather than accessing and touching animals. The children can have a programmed closer experience with a keeper, but these animals are not as accessible as the farmyard animals.

The history of collecting and classifying animals has its origins in human impulses of curiosity and also control. The exhibition of wildlife in the midst of civilized societies has been a constant of human history because it has helped people place themselves in relation to the rest of the world. This placement has become a critical matter of global policy-making in the face of environmental crises. While a global pandemic might have taken the focus off climate and biodiversity crises, it is worth noting that climate change and the destruction of natural environments is a frightening cause not only of new diseases, but of new and swifter means of transmission—a recipe for new pandemics. In short, there is scarily strong research behind the plot of movies such as such Contagion or Outbreak. Revisiting and cultivating an informed interest in animals and their habitats is something that zoos are well placed to help us with.

Jo Russell-Clarke is is a registered landscape architect and Senior Lecturer in the School of Architecture and Built Environment at the University of Adelaide. She is Foreground’s Editor-at-large.