Binary distinctions between natural and urban environments fail to account for the layered and interdependent ecologies that support both human and non-human well-being – something that healthy cities have known for centuries.

In western thinking people generally consider themselves separate from, above, or in control of what we think of as nature. Even though the world is ever more urbanised, there is a large body of evidence that people remain highly dependent on the natural world: a view that is endorsed by organisations including the World Health Organization. For example, there is new evidence demonstrating that biodiversity is important for health and wellbeing, including in urban environments – although, how and in what ways is still becoming clear.

Researchers have already established that the inclusion and encouragement of non-human animal and plant species in cities is incredibly beneficial for health. Tree cover in urban areas is associated with lower obesity, improved social cohesion, and fewer incidences of type 2 diabetes, high blood pressure and asthma. And contact with nature is known to positively impact physical, psychological and mental health. For example, through practices of care and co-habitation, pets have various positive effects on human health including reduced blood pressure and better self-esteem. Caring for plants through gardening has been shown to have similar positive outcomes, including improving mood and providing physical, nutritional and social benefits. Yet this knowledge has been insufficient to halt the course of many current global problems, including climate change, pollution, habitat destruction and mass species’ extinctions. An underlying reason might be that we still consider ourselves, and our urbanised lifestyles, as separate from nature. One way to shift away from this separated way of thinking about cities, health and human-nature relationships is to turn to ‘more-than-human thinking’.

More-than-human thinking and theories have arisen in a number of disciplines in the social sciences and humanities over recent decades. Some of the key ideas include decentring humans in concepts and models, moving beyond binary categories of nature/culture or wild/tame, and recognising the agencies of non-humans such as plants and animals. These entry points help generate alternative ways of conceptualising the world and connect to a richer, less human-centric understanding of what healthy urban environments might mean, and look like.

Cities are comprised of, shared, and made by animals, plants, fungi, microbes, atoms and many other living and non-living beings, technologies and materials.

Yet this exciting work has rarely been translated for use in urban planning, design or health promotion. This may be partly because cities seem to simply be about and for humans. At the heart of most urban challenges are entangled relationships and encounters of humans and innumerable others. In starting to take a closer look, it quickly becomes clear that cities are comprised of, shared, and made by animals, plants, fungi, microbes, atoms and many other living and non-living beings, technologies and materials. The Mandala of health and other models to understand how cities affect human well-being.

Although in the past, socio-ecological paradigms such as The Mandala of Health have been a useful starting point for understanding how cities, their characteristics and environments affect human health and wellbeing, this thinking is limited in its capacity to change or radically challenge the pervasiveness of human centricity to enable cities to truly be designed and lived-in as more-than-human.

There are three main issues with current thinking about cities and health that more-than-human thinking can help resolve.

Firstly, as indicated, the centrality of humans is not questioned or interrogated in the usual way we think about cities. Always starting with humans not only excludes other life forms, but it precludes other ways of understanding and knowing the world and can inhibit the emergence of innovative, relational thinking required to tackle urban problems. This is not surprising considering the humanist mandate of public health, which is also common to disciplines such as urban planning and design. Continuing to place individual humans at the centre of the urban paradigm also means poor health outcomes can be readily blamed on individual people rather than the social and environmental conditions in which they live.

Secondly, existing concepts and tools, such as ecological and behavioural models of health, cannot escape criticisms of dualism and segmentation that, despite intentions, separate nature from culture among other divisions. For example, that which divides various levels or layers of ‘environment’, ‘behaviour’ and ‘community’ in the Mandala of Health are often poorly explained and conceptualised.

Thirdly, aside from ecological health paradigms, in current thinking about urban health, ‘nature’ or ‘the environment’ is described in universal and homogenous terms and is also problematised as passive, or lacking in agency: ‘we keep treating nature as if it were something that could be injected into cities in the form of parks or green roofs, [or] an aesthetic artefact’. Admittedly, it is not easy to shift the binary language that separates humans and nature, and renders other species as passive. 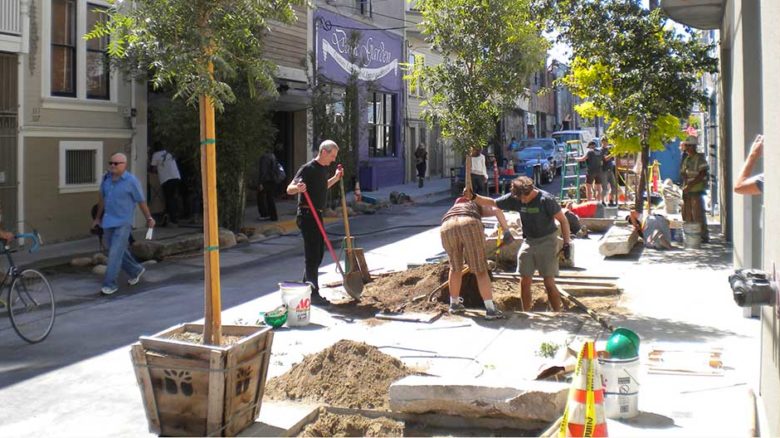 No site is too small for Friends of the Urban Forest, bringing life back to the street. 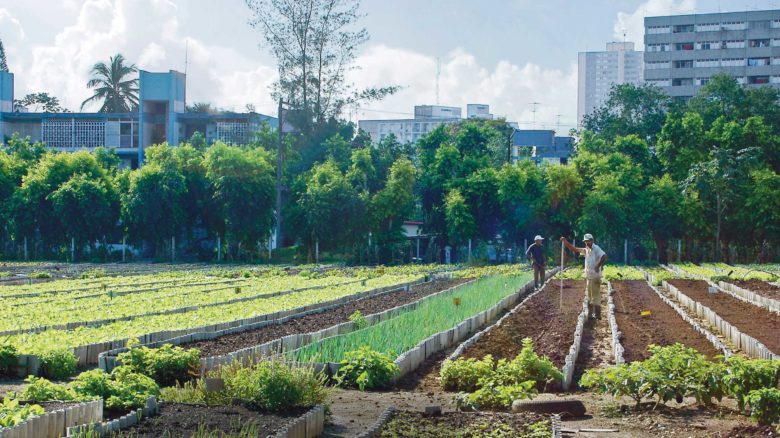 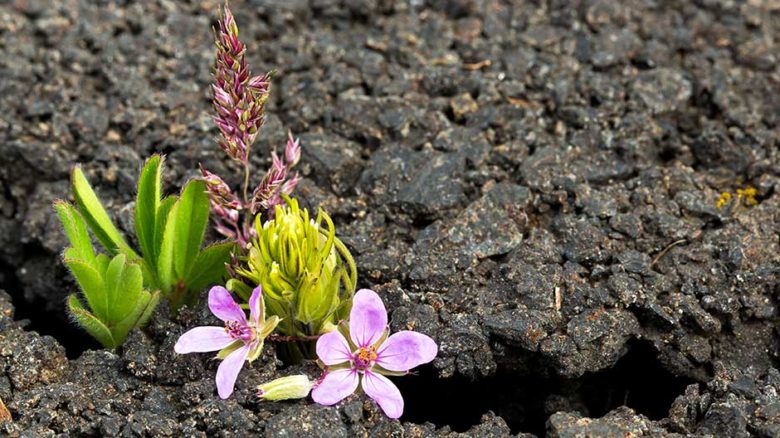 Nature finds a way, even in the most hostile of human environments. Image: Shelia Sund 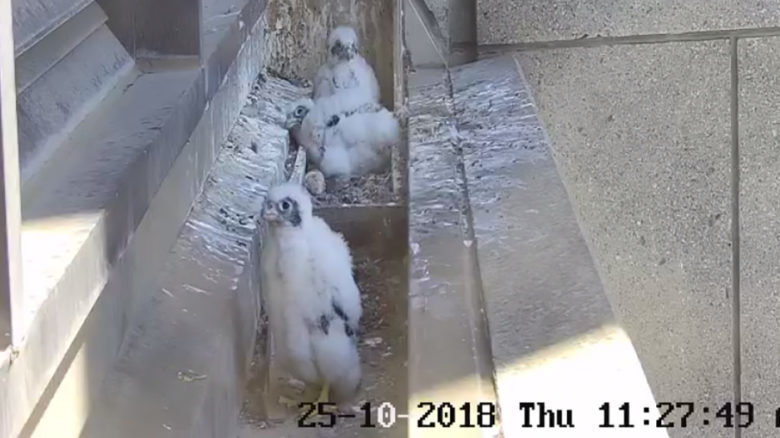 Peregrine falcons have been breeding on top of 367 Collins St for many years. Image: www.367collinsfalcons.com.au

There are other signs that we need to think about cities and human-nature relationships differently. Although in general cities have been considered degraded and impoverished forms of habitat, this idea is now being questioned as new research shows how some species directly benefit from cities and that others can adapt more readily than previously assumed. All cities, regardless of their size, geography, degree of urbanisation and density (among other characteristics) can support a surprising array of non-human species. Most obviously, habitat is provided through the creation of greenspaces, parklands, gardens, lawns and other vegetation. Moreover, it is also delivered through built structures, water sources and other substrates or forms of nourishment and protection not necessarily intended for use by, or to benefit, species other than humans. These include homes, offices and buildings, landfill and transfer stations, tips, general rubbish or litter and waste treatment plants.

Other ways cities support non-human species is through indirect means such as road-kill as a source of food for scavengers and, more directly, through humans supplying nest boxes and feeding birds and mammals in their backyards. Some species can even thrive in polluted parts of cities avoided by humans, which inadvertently can result in their protection. A good example of this is the endangered Green and Golden Bell Frog, discovered in a polluted site during the extensive works undertaken for the 2000 Sydney Olympics. In fact, there is mounting evidence that cities are crucial habitat for many species, including some under threat.

In some Australian cities it is common to see species of birds and bats preferring to roost in scraggly trees at busy suburban intersections full of noise and light pollution.

This new evidence calls into question policies that focus on preserving habitat outside of urban areas. This knowledge also illustrates that binaries of ‘wilderness’ versus ‘urban’ or other simplistic conceptualisations of what is and what is not habitat are no longer useful in worlds that have always shaped, and have been shaped by, many diverse life-forms and their agencies and capacities to adapt. More-than-human thinking can help to understand how urban environments and their health impacts are negotiated, experienced, made and remade by relations between humans and non-humans alike. They can also help us to start to see cities through ‘more-than-human’ eyes.

For example, in some Australian cities it is common to see species of birds and bats preferring to roost in scraggly trees at busy suburban intersections full of noise and light pollution, rather than relatively intact, ‘quiet’ forest not too far away. Traffic-centred intersections do not seem ideal forms of habitat according to human understandings of quality, but rethinking this scenario from and with the perspective of a bat or bird such places can offer superior protection from predators and more readily available food sources compared to their usual forms of habitat.

In other cases, cities can provide stable food and water supplies through gardens and supplementary food provision that are taken advantage of throughout the year, changing the overwintering habits of some species, particularly birds. Plants are also active urban agents and are increasingly valued as key actors for liveability, sustainability and biodiversity in urban environments. A study of street vegetation in Paris and Montpellier studied the persistent plants that occupy tree pits (shallow indented gardens in footpaths where street trees are planted) and other unexpected places. Despite the challenges of competing against traffic and apparently a range of impermeable surfaces, the tenacity of the plants meant they were able to persist in the cracks of asphalt, between cobblestones of sidewalks, in street tree pits and flower boxes, and even on walls.

These examples illustrate the agencies and activities of non-human species, some of whom are quick to adapt to the often rapidly changing circumstances of urban environments, more so than we humans usually give them credit. They also illustrate the capacities of non-human species to materially and affectively shape cities. This refutes the idea that plants and animals are universally passive recipients, or automatic victims of urbanisation. More-than-human theories and thinking can help reposition urban environments as dynamic places constantly being made and re-made by humans with other species. Moreover, they debunk the idea of human exceptionalism that implies that, as a product of human effort, cities have somehow conquered ‘raw nature’.

To conclude, we are simply one species among many in urban environments whose lives are variously entangled with others. More-than-human thinking helps to reframe how cities are conceived, beyond the current human-centric fame, so that they can be designed, governed and lived in as biodiverse, eco-centric places that are healthier for both humans and other life-forms. Whether we like it or not, cities are and always will be more-than-human.

She is Senior Research Fellow at RMIT University’s Centre for Urban Research in Melbourne. Her research focuses on human-environment interactions in urban settings in the context of everyday life. She is particularly interested in how people interact with animals and plants in homes and neighbourhoods, how these interactions affect health and wellbeing, and the implications for making cities greener and more biodiverse.