The Gold Coast Home of the Arts takes a bow

HOTA picks up an award in the 2018 Australian Institute of Landscape Architecture awards, for its seamless integration of landscape and event venue, within 17 hectares of tropical landscape.

The Gold Coast has undergone rapid change in the past 50 years. Small coastal and hinterland villages have grown and merged to become Australia’s largest non-capital city, with 28 percent of the population born overseas and hosting over 12 million visitors every year. Since the 1950’s, its reputation has largely been the hedonistic pursuit of sun, sand, surf and schoolies week. As a relatively new city, the Gold Coast is now looking to create an identity that reflects a shifting community that values culture as a part of everyday life. In The Big Picture Life: Work and Relationships in the 21st Century (2006), Bernard Salt examines further implications of demographic shifts toward the coast that he had identified in the start of the new millennium.

“Make no mistake, the Gold Coast is a creation of the late 20th Century. It was not kicked off with an historic envisioning statement – this will be the place for a village – as was Melbourne. It has no birth date as does Sydney. No. The city of the Gold Coast emerged in the latter decades of the 20th century because the Australian people willed it into existence.”

Further proof of the Gold Coast has chosen its own path, is admirably demonstrated by the new Home of the Arts (HOTA). Its Outdoor Stage is the first phase of a master plan to connect the Gold Coast Cultural Precinct with Surfers Paradise. Consisting of a black box theatre wrapped in landscape and an amphitheatre catering for audiences of up to 5,000 people, the award winning project is quickly proving itself as a world class destination, hosting performances, civic and cultural celebrations, including the 2018 International Festival of Landscape Architecture.

The creation of this new topography and landscape is a celebration of the local subtropical climate and its regional context, providing views to the coast and the hinterland.

Rather than a stand alone building, the stage is enveloped within a large mound forming a substantial green roof and interpretive landscape. The creation of this new topography and landscape is a celebration of the local subtropical climate and its regional context, providing views to the coast and the hinterland. This seamless integration of urban design, landscape and architecture is testament to both the process and partnership between client, community and the multidisciplinary design team. Born from a two stage international design competition, the project is a collaboration between ARM, Berlin based Topetek1 and CUSP. As Stephen Pate, director and co-founder of CUSP explained in Australia by Design (Series 1 Episode 2), “It could have been something else. It could have been a building with walls and a roof, but instead it’s permeable and reflects the Gold Coast lifestyle ” 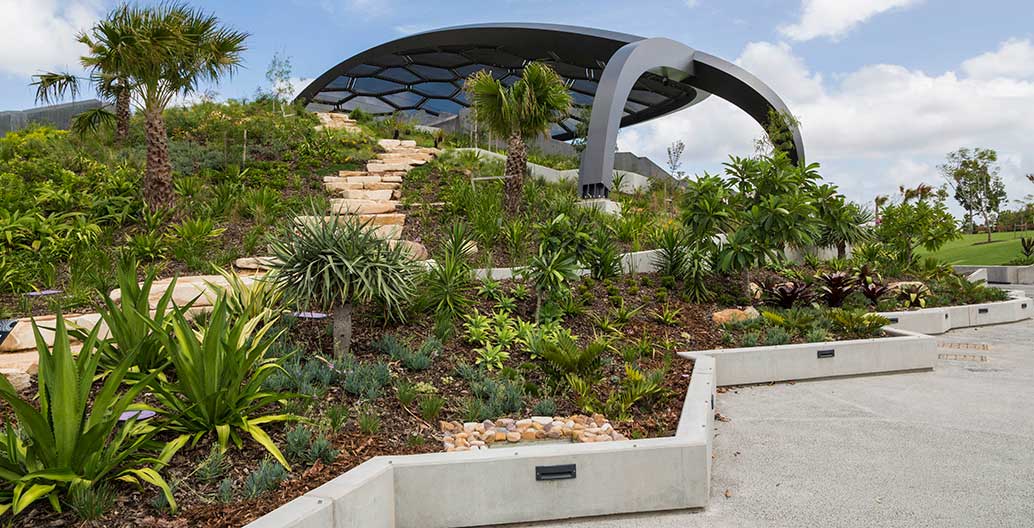 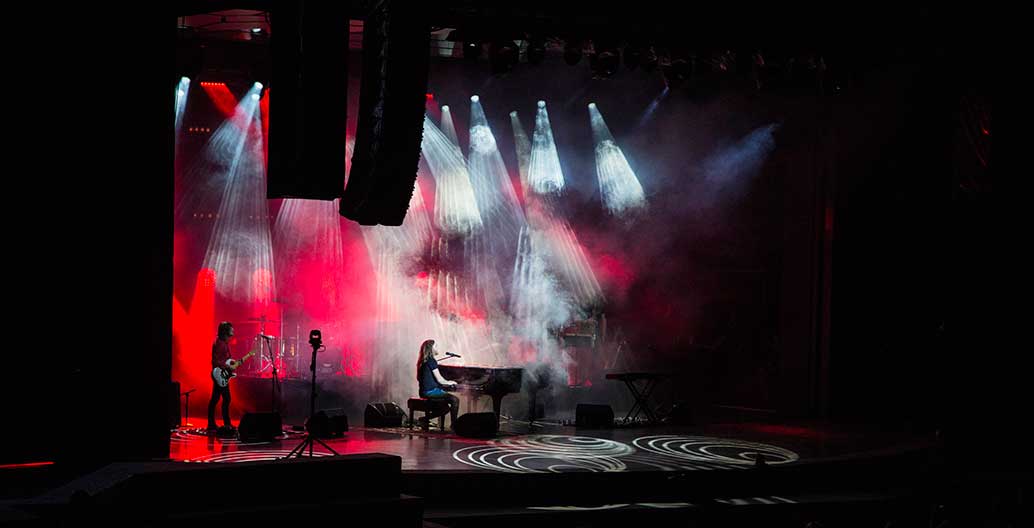 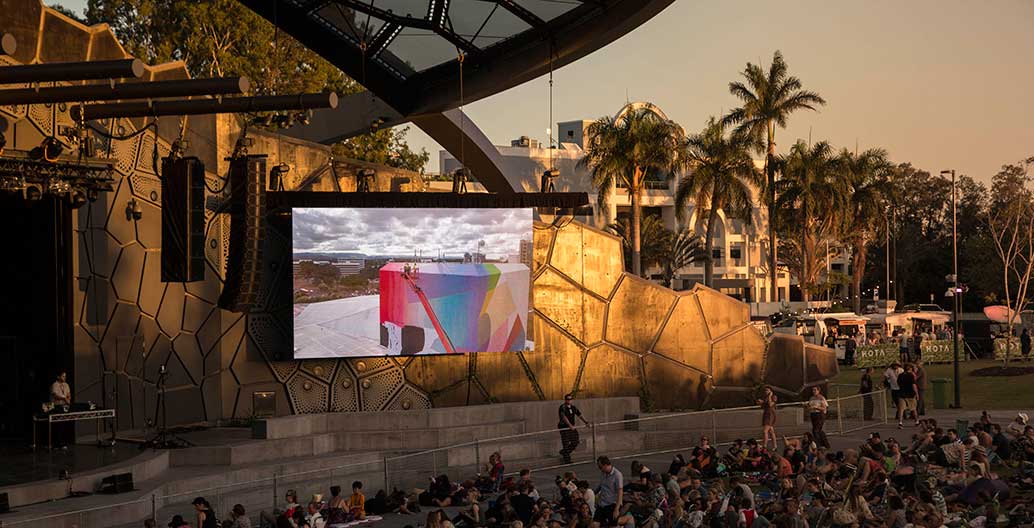 Themed subtropical landscaped zones including the Rainforest Adventure and Summit Gardens provide a local botanical experience and the large grassed terraces are ideally suited to outdoor events for the coastal Queensland climate. Part of the success of the Outdoor Stage has been the purposeful endeavour to broaden the cultural identity of the Gold Coast by providing a cultural and civic heart that is equitable and accessible to everyone. This endeavour, to create a cultural heart, where people come together to engage with arts, culture and each other, is to ‘make visible’ the Gold Coast’s growing diverse community, cultural and creative life.

While for some HOTA appears to be an ‘instant success’, the site was actually identified as a preferred location for an arts centre as far back as the late 1960s. It took almost 20 years before the first Entertainment and Arts Centre was constructed on the site. It them took a further 30 years before the 2009 design ideas competition was pushed forward by the then Government Architect Philip Follent (and inaugural Gold Coast City Architect, 2003-2008). That competition was won by Super Colossal’s proposal Island of Culture. The creation of a Precinct Taskforce to oversee a master planning process and the International Design Competition followed.

HOTA Outdoor Stage successfully demonstrates how landscape and open space can foster public life by creating a place that gives visitors a unique cultural experience, largely as a result of their environment and context.

Concurrently, the City of Gold Coast was creating policies to cut red tape on planning processes, developing design guidelines and in 2014, published a guide to the City’s cultural investment and activity titled, Culture Strategy 2023. It set out a vision for a city that is that is distinctly Gold Coast. The Strategy has provided a coordinated and confident vision for the future that informs planning, programming and funding priorities.

The Strategy outlines a future where culture, including design, landscape and architecture, is central to community wellbeing, the city’s reputation, liveability and economic growth. It will underpin the design and development of the precinct over the next ten years as it continues to transform, activate and enhance.

As the first piece of the precinct plan to be realised, HOTA Outdoor Stage successfully demonstrates how landscape and open space can foster public life by creating a place that gives visitors a unique cultural experience, largely as a result of their environment and context. Further, it reveals the transformative power of design and recognises the central role of arts and culture in the wellbeing of communities and the ways we identify ourselves. HOTA is the Gold Coast all grown up.

Sharon Mackay is a landscape architect and presenter on Channel TEN’s Australia by Design Landscapes. She has designed many award-winning places, been an invited speaker at the World Architecture Festival and had her work exhibited in the Australian Pavilion at the Venice Architecture Biennale. She was a host of the successful radio show The Plan – Architecture, Environment and Affect and the Creative Director of the 2014 International Festival of Landscape Architecture.