Yagan Square connects Perth’s once-divided urban heart; can it do the same for the city’s people?

A dramatic public square in Western Australia aims to forge a new centre for the state’s capital, grounded partly in its Indigenous culture and history.

Perth’s attitude towards ‘progress’ has fluctuated over the years. This situation is the legacy of the lingering insecurity resulting from Perth’s early years, in which it was both derided and deserted, in combination with more recent periods of booming economic growth and brittle bravado. Attitudes towards progress have generally been divided as follows: firstly that progress will reduce Perth to being like ‘everywhere else in the world’ or secondly, progress will make it a ‘world-class’ city of ‘international renown.’ In the first decades of the 21st century, the mood swung decidedly towards the latter – Perth, with its reputation for being an overgrown country town ached to progress to being a ‘real city.

As a part of a collective navel-gazing about Perth’s urban identity, city authorities consulted various European international experts, including urban planner Charles Landry and urban designer Jan Gehl, to both diagnose and treat Perth’s (sub)urban afflictions. Landry produced a brief book entitled Perth: town or city? Published in 2007, the dominant message of this book was that Perth, which was in the middle of a gargantuan resources boom, had a rare opportunity to make itself a ‘proper’ city. Landry denounced Perth’s lack of urbanity:

I have criss-crossed over three hundred and fifty kilometres of Perth from the eastern suburbs to the western in search of a speck of urbanity. I do not denigrate the delights of suburbia, but Perth has ninety-eight percent of it. The suburban washes over metro Perth like an endless patina as the swathes of asphalt covered to get there dull the senses.

While Perth has historically relied on its natural setting to shape its identity, Landry condemned the lack of aspiration that became subsequently reflected in Perth’s ubiquitous suburban form. Other visiting experts and commentators took a similar line. The highpoint of Perth bashing was reached in 2007, when visiting ex-Victorian premier Jeff Kennett described Perth as being so pristine as to be “almost antiseptic.” Conceding that Perth had “a heart,” he then questioned whether indeed it had “a heartbeat…” 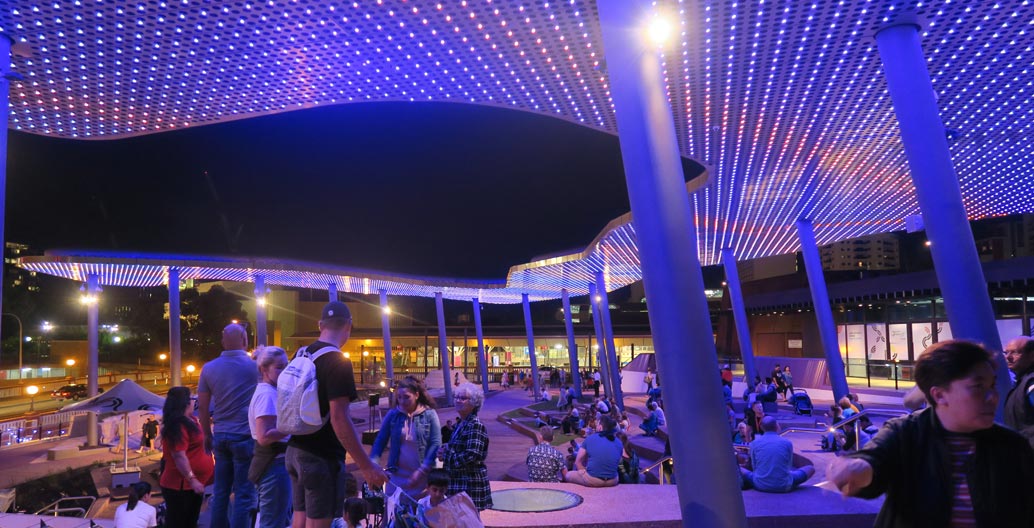 Lit up at night, Yagan Square offers new ways and spaces in which to gather. Image: Aspect Studios 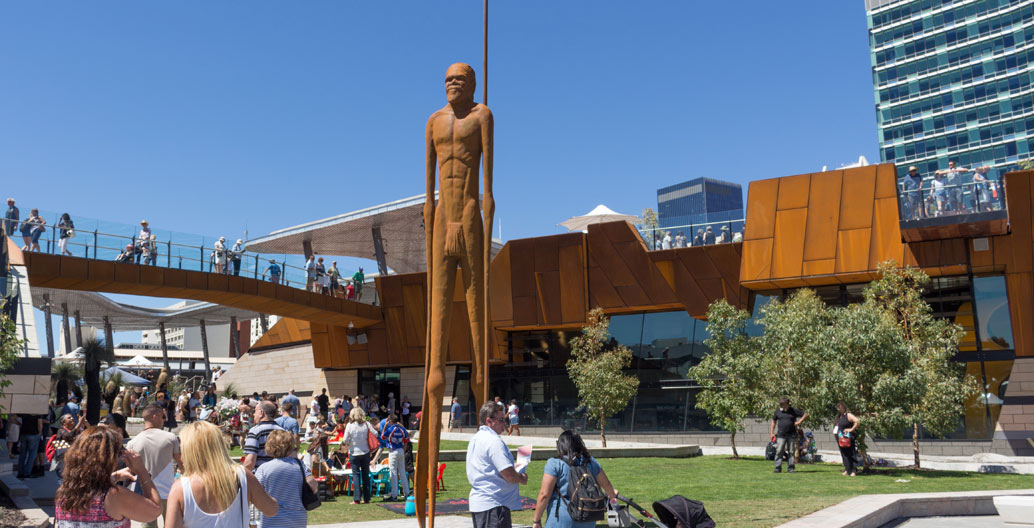 “Yagan Square is a shining example of a Civic project that creates a simulating new epicentre for Perth, whilst weaving together a captivating story of Western Australia’s history and respectfully telling the stories of the Whadjuk Noongar people.” – Tim Arnold, AILA CEO 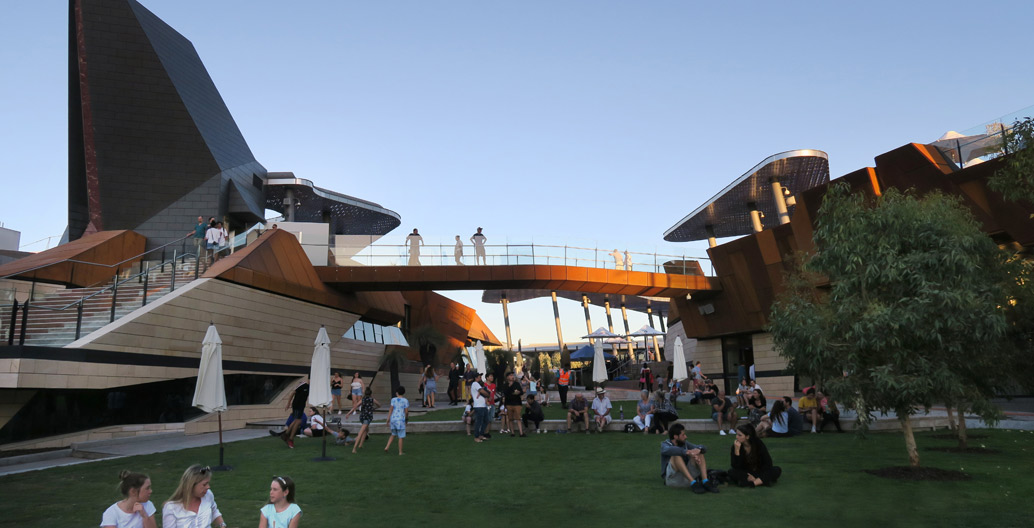 A number of key urban projects, conceived as an antidote to such assessments, have been delivered in Perth in the past decade, such as Yagan Square, Perth Arena and Elizabeth Quay. The Metropolitan Redevelopment Authority (MRA) bills Yagan Square as “the city’s new heart,” predicting it will be “one of the city’s most popular community, meeting and celebration places…” The pacemaker regulating this beating heart is an assortment of cafes, restaurants, bars, shops and an “iconic” Digital Tower, all accessed from adjacent train and bus stations. The centre point of the project is the “Square,” an amphitheatre that the MRA expects will host regular events, performances, and celebrations. The complex and engaging interplay of landscape and architectural form is reminiscent of Melbourne’s Federation Square and the MRA appears to be attempting to position Yagan Square as a similar locus of urban life.

Yagan Square also forms part of the Perth City Link project that bridges over the (now tunnelled) railway line that had historically disconnected the central business district with the entertainment district of Northbridge. Since John Septimus Roe set out the grid of the Swan River colony in the early 19th century, Perth has been characterised by an east-west running grid that typically limited north-south permeability. Projects like Elizabeth Quay, Yagan Square, and the City Link project more generally have been about forging stronger north-south connections from the cultural centre and Northbridge to the north of the city, through the central city, to the Derbarl Yerrigan (Swan River) in the south. This connection is particularly important with respect to Yagan Square, because it allows for a confluence of Perth’s once staid CBD with the nightclub, bar and restaurant district of Northbridge. No doubt, both will benefit from this exchange. 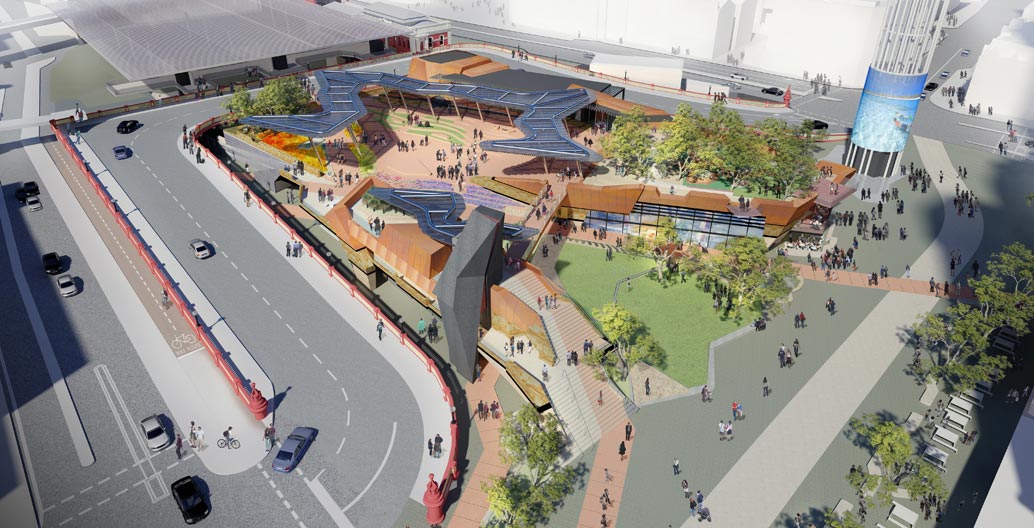 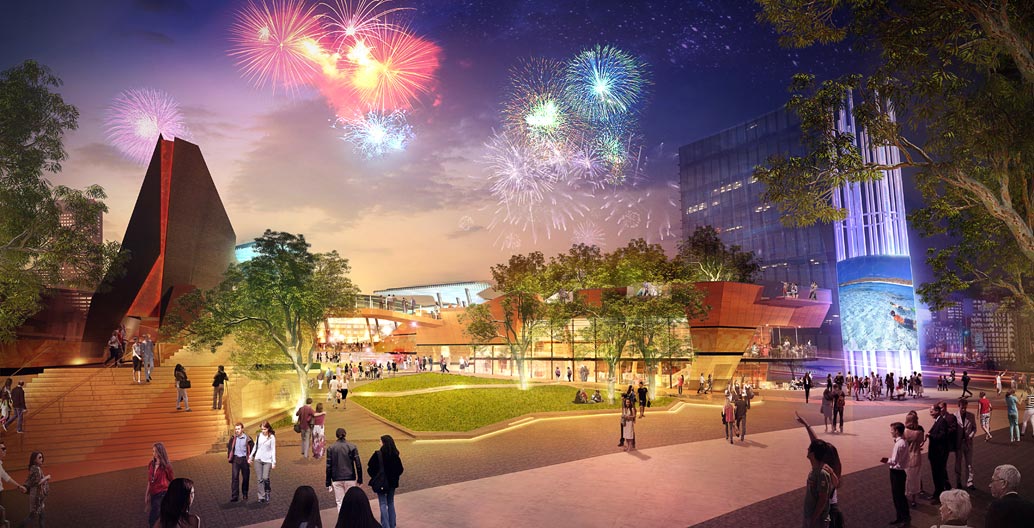 A window on Noongar culture

Designed by a multi-disciplinary team comprising Lyons as principal architect, iredale pedersen hook architects and landscape architects, Aspect Studios, the project attempts to evoke an ambitious synthesis, according to the MRA, of “Western Australian history, lifestyle, landscape, and produce.” The design of Yagan Square reflects the natural landscape of Western Australia (WA) – from the “unique geology, colours, textures and natural materials, to native wildflowers” and the “best of WA produce” – a philosophy which manifests in the food court as local honey-flavoured ice-cream, among other novelties. The most obvious WA reference in the built form is the rusted corten steel building facades, which evoke the state’s recent iron ore boom that largely funded the project. This is fitting as Yagan Square nestles within the arms of the heritage-listed Horseshoe Bridge – a graceful bridge which was itself a legacy of WA’s late 19th– and early 20th-century gold rush.

The MRA defines Yagan Square as being the first significant public precinct in any Australian city to recognise an Aboriginal person and promotes it as offering a “window into Noongar culture.” Yagan (1795-1833) was a pivotal figure in the Noongar resistance to a European annexation of Perth who two teenage settlers (and apparent friends) killed for a reward. One of the teenagers was also killed in the attack, and later, Yagan’s head was severed as a trophy – the head eventually washing up as an anthropological curiosity in London.

The project’s interest in Noongar culture finds expression in a number of artworks by Indigenous artists. Lance Chadd (also known as Tjyllungoo) has contributed an elongated and elegant nine-metre-tall Indigenous figure, titled Wirin, that represents the “sacred force of creative power that connects all life of boodja (mother earth).” This figure stands at the foot of the project, gazing over the plaza and adjacent entertainment district (this statue retains his head, unlike a small statue of Yagan exiled to Matagarup – Heirisson Island – that twice had its head cut off by vandals). Other Indigenous-themed artworks include Digital Tower, a large cylinder wrapped in a LED screen, which broadcasts “stories of” WA,  and the footy. The design of Digital Tower was inspired by the reeds of the wetlands that were once present on the site, and the 14 ‘spikes’ that support the tower represent the 14 languages of the Noongar people.

The Indigenous theming of Yagan Square is undoubtedly meant sincerely, and the planning process involved the Whadjuk Working Party and the South West Aboriginal Land and Sea Council, as well as numerous Indigenous artists. However, it is in part, a counterpoint to unresolved Indigenous issues associated with Elizabeth Quay, the city’s new waterfront (also delivered by the MRA). The planning for Elizabeth Quay intended the project would house an iconic Indigenous Cultural Centre, which was to terminate at the other end of the William Street axis that Yagan Square concludes – however, this was handballed into an unfunded second stage of works (along with a cable car) and has little chance of realisation. Yagan Square appears, in part, a symbolic offering in lieu of this relative failure on the waterfront.

The test for Yagan Square over the long term will be whether it becomes a viable space for Indigenous people to both occupy…[and] take ownership over.

Finally, the test for Yagan Square over the long term will be whether it becomes a viable space for Indigenous people to both occupy and to some degree take ownership over. For one example, it is not clear that the mostly Indigenous groups who congregate to the east of the train station, drinking in the darkness, would actually be welcome in Yagan Square – amid the well-heeled CBD workers drinking cocktails in Yagan Square’s bars. Ultimately, the success of Yagan Square from a cultural perspective will be whether it can transition from a space that “provides a window into Noongar culture” – perhaps principally for tourists – to one where Noongar people can assert their contemporary culture and have a consistent, real life presence in the space. Nonetheless, Yagan Square represents an important moment in asserting Perth’s urban identity, and forging crucial spatial and cultural connections. For this, the design and planning team should be commended.

Dr Julian Bolleter is the author of Take me to the river: the story of Perth’s foreshore. He is an assistant professor at the Australian Urban Design Research Centre (AUDRC) at the University of Western Australia. 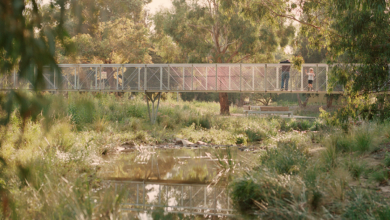