What does the future hold for Australia’s biggest urban park?

Western Sydney is growing fast and so is the need for open space. Three award-winning projects reveal how new investment in careful park planning and design can enhance the value of green space for communities, now and for decades to come.

Greater Western Sydney has one of the fastest growing populations in Australia. Currently home to 1.9 million people, the region’s population is projected to reach three million by 2036. This population growth and related development poses potential challenges to the preservation of what is the largest urban parkland in Australia, the Western Sydney Parklands (WSP).

The 5280-hectare Western Sydney Parklands area stretches 27 kilometres from Quakers Hill to Leppington, running through the local government areas of Blacktown, Fairfield and Liverpool. It is 25 times the size of Centennial Park in Sydney’s eastern suburbs, and similar in scale to the Lee Valley Park in London (United Kingdom) and Rouge National Urban Park in Toronto (Canada).

The 1968 Sydney Region Outline Plan was the first time the potential for a parklands corridor west of Sydney was identified. Strategic early land acquisition created a major green infrastructure corridor. Its regional importance was recognised in 2006, when the NSW Government introduced the Western Sydney Parklands Act to Parliament, setting out the boundaries and establishing the Western Sydney Parklands Trust (WSPT), the self-funded government agency that manages them.

The 2030 Plan of Management sets out the latest vision for the future of these parklands. “The legacy of what started 50 years ago by the NSW Department of Planning is now really beginning to be realised,” says WSPT executive director Suellen Fitzgerald.

“As the population of Western Sydney grows, the parklands will help to alleviate temperature increases and provide a place of respite for the local community,” Fitzgerald explains. “Vegetation and water-based recreation in summer will certainly help in that part of Western Sydney, and expanding the bushland corridor will also ensure that there is a home and habitat for native species in the future.”

“The other important benefit of the parklands [is] that visitors will see the beauty of the original landscapes – the Cumberland Plain Woodland and the Spotted Gums – and these will become synonymous with the image, identity and ambience of the area” – Suellen Fitzgerald @WesternSydPark

One of the emerging challenges the Western Sydney Parklands faces is the development of the Western Sydney Airport and its associated Aerotropolis, which will bring both more people to the area and higher temperatures, as the proportion of hard paving and buildings increases.

“The Aerotropolis is going to bring a city the size of Adelaide to our foothills, so the southern part of the parklands will become increasingly important in meeting the needs of that new population,” says Fitzgerald. “The other important benefit of the parklands to the Aerotropolis will be that visitors will see the beauty of the original landscapes -– the Cumberland Plain Woodland and Spotted Gums – and these will become synonymous with the image, identity and ambience of the area”.

While these responses address different scales and slightly different contexts, they all demonstrate keen concern to protect the future of the parklands by weaving them into the lives and minds of the communities they serve. They share a common interest not only in protecting the parklands, but also in ensuring they are well loved and used.

Under the Plan of Management 2030, 40 percent of the parklands will remain as bushland, with 30 percent set aside for recreation and tourism facilities and five percent maintained for urban farming. “It allows for uses from bushland to business hubs, from tourism to urban farming, from sport to community facilities,” says Fitzgerald. “With that broad range of uses, the plan sets the parklands up to meet many different kinds of community needs in the future”.

The plan gives the trust a flexible set of guidelines to address and adapt to the new and changing needs of surrounding communities. Already more than 140 nationalities live in the Blacktown, Fairfield and Liverpool City Council areas. Nearly half of all residents neighbouring the parklands are from non-English speaking backgrounds. This diversity brings with it its own set of challenges and opportunities, as the various groups make use of the parklands and their amenities in different ways.

“Western Sydney is home to people from all over Asia, the Middle East, South America and Africa; it is a very multicultural community,” says Fitzgerald. As Fitzgerald says, culture and religion are a vitally important part of daily life for many of these communities. “That means that they frequently like to come to the park in quite large groups – family, community or cultural groups – so we provide facilities to suit, such as picnic shelters for large groups of 20 to 100 people to comfortably gather for outdoor celebrations and events.” As there is a substantial Muslim population, she adds, especially in the south-west, “we have barbecue facilities for halal cooking so people can bring their own coal and dispose of it safely in a picnic ground.”

The open space corridor has protected some of the most beautiful parts of natural bushland in Western Sydney. The new plans outline opportunities for all sectors of the community to get to know the Cumberland Plain Woodland and to understand the characteristics of the native landscape in this part of the world. “The corridor also protects cultural and ceremonial places of Aboriginal significance so that newer communities can understand the Indigenous history of Western Sydney,” says Fitzgerald. “It also encompasses some rural landscapes, which are so much a part of the more recent heritage of Western Sydney, as the foodbowl of the city”. 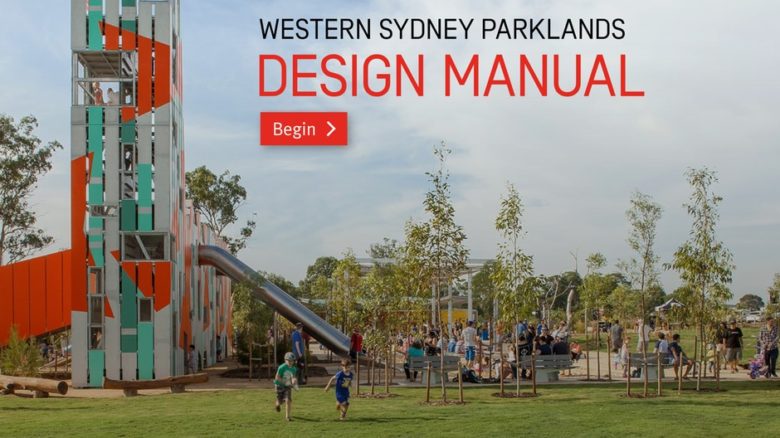 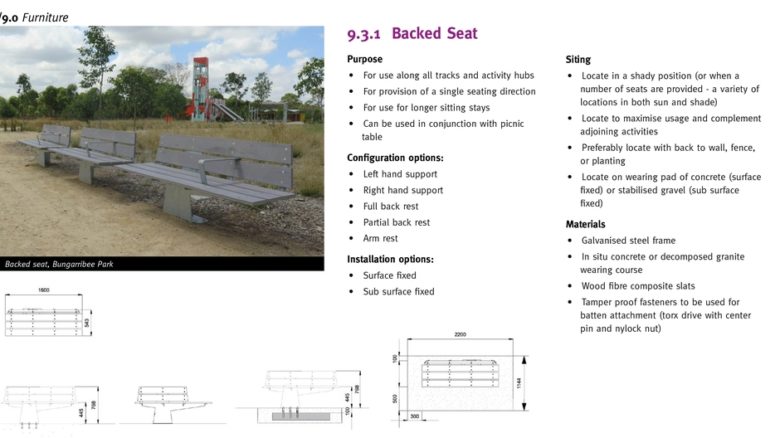 One of the objectives of the plan is to ensure the economic sustainability of the parklands into the future. The plan sets targets to increase visitation from 2.6 million visitors a year to 10 million visitors a year by 2030. “One of the ways we will do that is by organising events such as the Food Fest,” says Fitzgerald. “It started with 2000 people and at the 2019 Food Fest just held in September, we had 10,000 people. Also, Chang Lai Yuan Chinese Gardens located within Nurragingy Reserve within Blacktown Council are part of the sister-city project with Liaocheng Municipal Government in China. One of the motivations to develop those gardens was not just to connect with the local Chinese community, but also to attract international Chinese visitors.”

While the plan outlines the vision for the wider Parklands and how it will be managed, the Design Manual is a tool for landscape architects to use in designing individual precincts. The Manual has determined best practice based on what has already worked well and lessons learned from previous projects delivered by WSPT over the past 10 years.

NewScape Design co-ordinated the compilation of the manual, provided the technical specifications and advised on graphic design. Director John Newman says “the standard designs in the manual typically capture the best way to design for Western Sydney Parklands precincts, so that they can meet the requirements of visitors, management and maintenance staff and there will be a sense of continuity throughout the parklands”.

The trust has a well considered approach to the curation of designs for different key visitor precincts and a clear understanding of how different visitors may use the parks. “Some visitors have no experience of native Australian landscapes and are concerned about the risks of native animals, especially snakes,” says Newman. “On a separate project, we have been developing some short and easy walking track routes for visitors, to encourage them to venture out into the landscape and build their confidence to experience more isolated parts of the parklands.”

The Southern Parklands Framework focuses on a southern section of about 1500 hectares of the parklands system, from south of Elizabeth Drive in Cecil Hills down to Bringelly Road in Leppington. TYRRELLSTUDIO’s work rethinks the park’s present role as a greenbelt barrier to city growth, to make it a key structuring device for the new Western Parkland City

“We created a fresh lens through which to view the Western Sydney Parklands by mapping and revealing layers of the ancient land in extensive detail,” says director Mark Tyrrell. “We prioritised the highest quality landscapes for recreation, then proposed precise, mega-scaled sculptural armatures as design gestures to highlight the specific characteristics of the landscape through superimposition: a perfect circle defines the crest of a bowl-shaped landform; a cycleway skims across two mirrored dams; a straight, level walkway creates a datum through undulating hills and against a meandering canal.”

The design took inspiration from the robust infrastructure of adjacent freeways and canals, as well as from the micro details of grasses, considering “varied landscape textures and their impossible beauty under the western light at different times of day”.

The strong growth and diversity of communities west of Sydney is driving a new wave of timely open space planning and design. Freshly envisioned parks are building on a planning legacy that recognised the importance of connected open space for the vital recreational, cultural and environmental services they provide. This new suite of projects recognises the area’s rich and ongoing layers of occupation and looks to protect and encourage engagement with a unique landscape, now and into the future.

Neena Bhandari is a Sydney-based foreign correspondent and past president of the Foreign Correspondents’ Association (Australia & South Pacific).