China is reviving once forgotten agricultural knowledge to help build water-sensitive ‘sponge cities’. Could Australia learn from its example?

Andrew Mackenzie: Kongjian, I love your idea of the first Chinese Emperor being a landscape architect. It does remind me that Julius Caesar was basically just an engineer. There is clearly an ancient knowledge base, and an ancient land management culture that has been around for thousands of years. Why did that get so comprehensively left behind 40 years ago for over a generation, and following that, what is the real catalyst to suddenly pulling that back at the big scale?

Adrian McGregor: Well developing nations at some point in their history all go through this process. So if you look at Australia, the Aboriginal people have managed the Australian landscape for 60,000 years and they did it in a very sustainable way until we hit our period of history when the European people came and transformed it into something different. So it’s a cultural overlay that’s come from another place that has wiped out these ancient traditions. So I would say it’s a similar story all over the world.

Kongjian Yu: When you use mono-functional infrastructure things become very efficient. Because we think that nature is “abundant”, industrial technology can be so useful and productive – in terms of production, use of water, and so on. But the precondition is abundance. When we are working towards one goal, we forget all other things. That’s the success and failure of the industrial knowledge.

And the success of agricultural civilisations is because they’re holistic. When the farmer has to consider their next generation – with their land and water boundaries limited – you have to holistically consider how you can adapt to the natural system. So you just can’t water something singularly,  you have to think about the fish, and in the next year, will it be dry or monsoon season? That’s the success of agricultural wisdom. But the failure is that when the market came in, and when industrial technology comes in, all of these ancient cultures become “primitive” or “backward”. So then industrialisation and urbanisation comes in and technology upgrades everything – and that’s what’s happening in China. For 5000 years China has been self-sufficient… just fifty years ago we already had almost 1.6 billion people living on a relatively small parcel of land.

“For 5000 years China has been self-sufficient… just fifty years ago we already had almost 1.6 billion people living on a relatively small parcel of land“ – Kongjian Yu, #Turenscape “When the farmer has to consider their next generation, they have to holistically consider how you can adapt to the natural system” – Kongjian Yu. AM: This question has come up in previous sessions, about the community-driven sense of urgency to fix something which may be enhanced or limited by the governance means – whether it’s between local governments and smaller communities, or communities and the state government. Do you think there’s also been any reciprocal change in approach in those who make the decisions?

AMcG: The challenge for China, and in many other developing nations, is human health. The impact of air quality and the way it hits the media, the impact of soil pollution, the impact of cancer clusters on children from industrial pollution. That’s the stuff that bubbles up very quickly.  Politicians engage with that and react with it very quickly which tends to drive policy more rapidly. That’s what I’m seeing externally when I look at China. Top-down management in China is very good, because it allows central government to mandate things very quickly and make rapid change – whereas in Australia it’s much slower. Obviously, there are positives and negatives, but I do see air pollution being a top priority in China in media and social media. A lot of the policy change is being driven out of media and politics.

“… top-down management in China is very good, because it allows central government to mandate things very quickly and make rapid change – whereas in Australia it’s much slower” – @adrianmcgregor

KY: … the President also has to breathe you know? Say food is polluted, I presume he can have clean food from somewhere else, but if the air is polluted he’ll feel it immediately.

Also once the capital is flooded, immediately people become aware. The reason why ‘sponge cities’ were on the national agenda was because of the 2012 Beijing floods, and at least 77 people died. At that immediately we saw media coverage, and the President picked up the idea. He spoke about it and captured the right sense of it: it’s nature based, it cleanses, you retain it, and it permeates based on natural systems. I think he also picked it up because it makes sense, and we’re in crisis.

AM: In listening to the other speakers, it’s interesting how much commonality there is. What’s happening in Denmark is akin to China’s push to retaining water and purifying it. Adrian, coming back to Australia what can you bring back from the work that you do in China to Sydney?

AMcG: For our practice, it’s the ability to think rapidly and bring teams together. Actually in China, the bar has been lifted in landscape architecture regarding expectations from a client, from what we even see here. So we do competitions there, they will invite maybe four or five or six firms from all over the world, so we’re competing against Turenscape, Saiki or SWA and they’re picking from all over the world.

And a competition on a big project, maybe there’s 100,000 US dollars per team, so they’re spending up to a million dollars on the competition phase of the project. Now show me somewhere in Australia where that happens? So what that does is bring the ambition of the project up. Of course they have the funds and the construction budget and those things behind it. But, what the Chinese are doing is driving this sort of ambition and scale up and in terms of landscape architecture, those opportunities are not here. So when we work on projects, all of those learnings come back through.

“[In China] maybe there’s 100,000 US dollars per team, so they’re spending up to a million dollars on the competition phase of the project. Now show me somewhere in Australia where that happens?” – @adrianmcgregor

AM: Looking at the projects, they’re obviously quite transformative. One thing that has been a growing conversation in Australia around regenerating cities – particularly parts of the city that have been run down for whatever reason – is the idea of “value capture”.  Essentially you do something beautiful and property prices go up, so can you take something from those property prices to reinvest in other parts of the city?

KU: Well in China, the first part of your question is about where the money come from. I’m telling mayors that if you build sponge cities, you will earn money. The Chinese land system is that all land is public, which means that for citizens to own it, they have to buy the land. So before you build the park, you put in the green corridors, the ‘sponge system’ and the council doubles the price…

AM: … I just wrote down the words “sponge cities equals capital”. 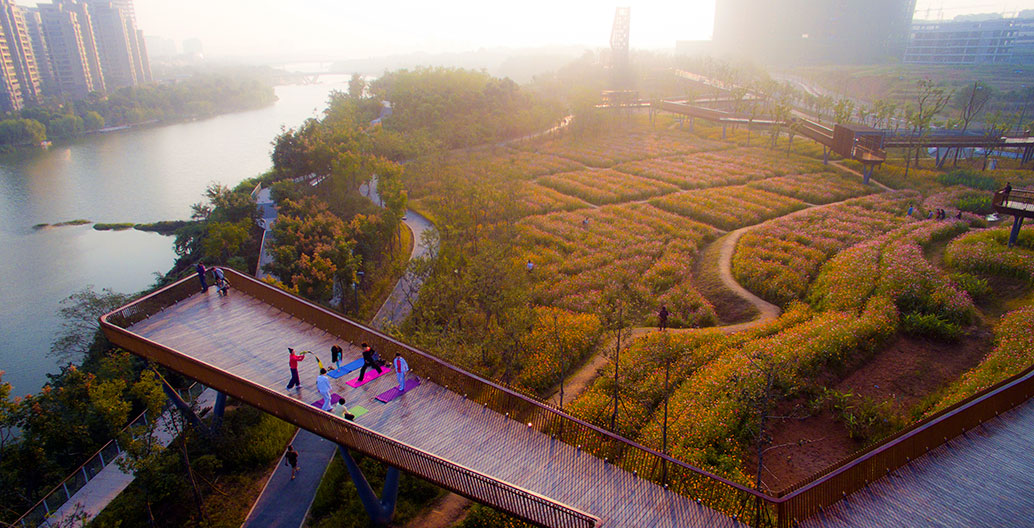 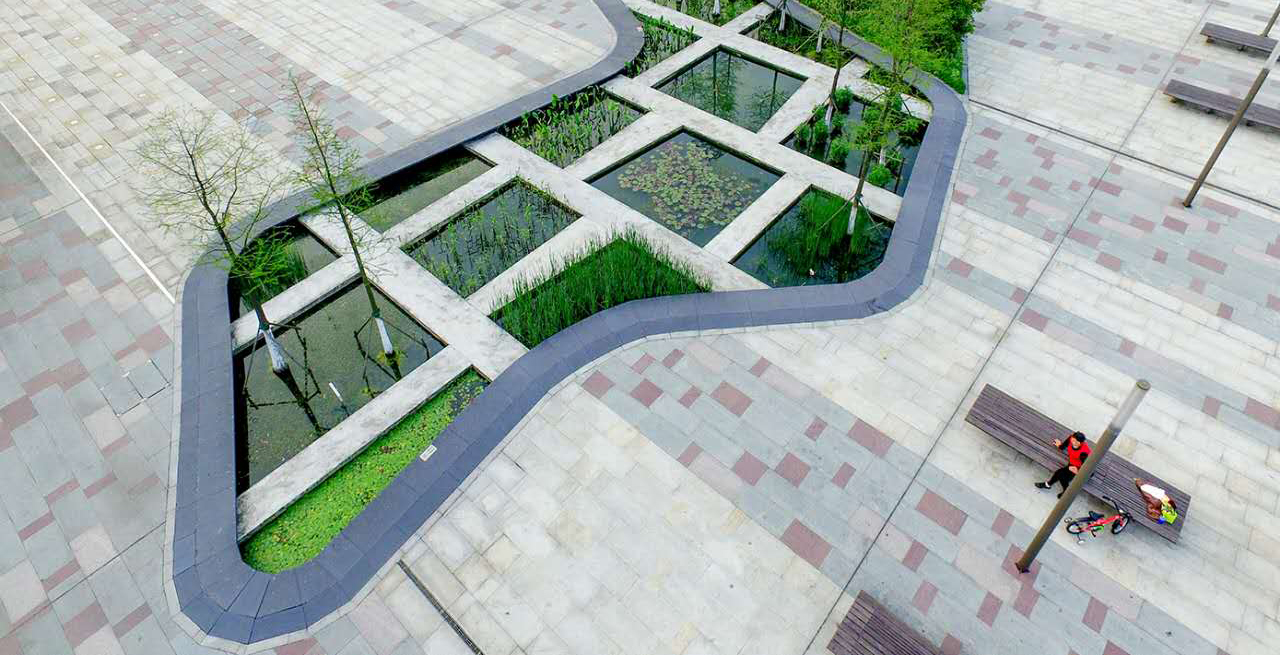 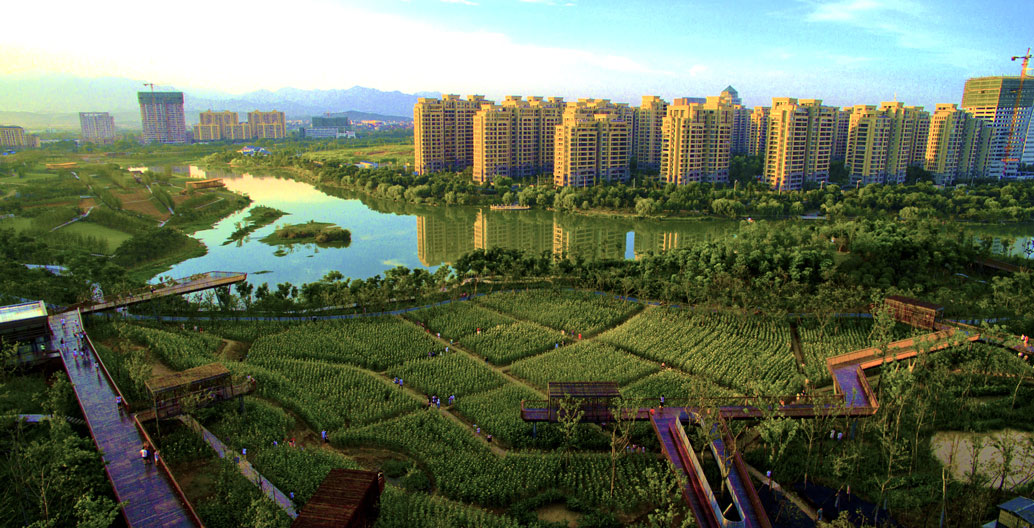 KY: … well that’s what just happened in Sanya Hainan Island. We did a whole project and the land values doubled in one year, and the real estate prices climbed even more. So that’s payback for the people who surround it, but it’s a public park. Cleaning the air and the water is social justice for everyone.

AMcG: Australia is terribly backward in how we’re looking at funding landscape and green infrastructure work. I worked on Parramatta Road corridor 15 years ago now, and we proposed a value capture perimeter around it which would then be poured back into regeneration of creeks, building open space, funding public transport. So the conversation has incrementally moved along, but nothing has occurred. Now that part of the city which is now central to Sydney has been developed, there are apartments where the land development has occurred. So the uplift has happened but what’s been the return to to the city and to the citizens of it? Pretty much zero. It hasn’t happened. So we should be doing this stuff as everyday, part and parcel of developing our cities. We still can’t do it. We’re still talking about it. It’s crazy…

KY: … you should move to China then.

AM: Kongjian, seeing as you run your academy, I wonder whether you think that the coming generation of landscape architects are being trained and taught with sufficient breadth. We’ve talked today about science, environment, politics, economics, and planning. In order to practice successfully you have to have a broad understanding of the environment. Do you think that the current teaching of new students is doing that?

KY: Just today I have 40 Chinese students here. I mean it’s really wonderful and helpful to be educated here. I graduated in US, 20 years ago we already talked about these ideas. Ten years ago, I was in Sydney we were all talking about “survival solutions”. So it’s very ironic that some of the brightest landscape architects now practising in China have been educated in Western countries.

“We are missing one generation of landscape architects in China because of the Cultural Revolution” – Kongjian Yu, #Turenscape

I would also say education has really transformed a whole generation of landscape architects in China. We are missing one generation of landscape architects in China because of the Cultural Revolution. All of those people who were educated are basically nice gardeners. Of course we are proud of that, but it didn’t solve the problem we face now. These new generations are educated, but they have to also understand there’s a Chinese wisdom they bring. They will be much better than myself.