The happy transformation of Felixstowe Reserve in Adelaide’s eastern suburbs has filled it with life of all sorts. More than just busy duck ponds, the cultural richness of the site is revealed and thriving too, while its many collaborators have been recognised with a bounty of awards.

In the north-eastern suburbs of Adelaide, a comfortable six kilometre bus ride from the centre of the city, is the newly completed Felixstowe Reserve. Not dissimilar to other reserves along the banks and floodplains of urban rivers, it is a recreation reserve and important extension of the wildlife and ecological corridor created by the River Torrens/Karrawirra Parri linear trail and creek tributaries. Google Maps still shows a dusty grey and brown slab of land, curiously green-pinned with seven seemingly invisible duck ponds. The labelled chain of ponds is a hint of a major transformation, one that has brought life of all sorts to a place of significant cultural value.

Felixstowe Reserve received three awards from the Australian Institute of Landscape Architects (AILA) South Australian chapter this year: an Award of Excellence in the Cultural Heritage category, a Landscape Architecture Award in Parks and Open Space, and the special Healthy Parks Healthy People SA award which is an initiative of AILA in partnership with the state government Department for Environment and Water, and the Department for Health and Wellbeing. 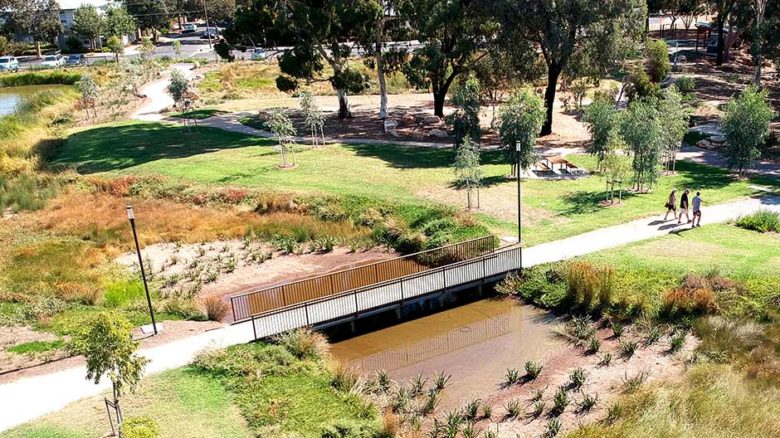 An early view of the wetland treatment ponds at Felixstowe Reserve. Photo: Oxigen 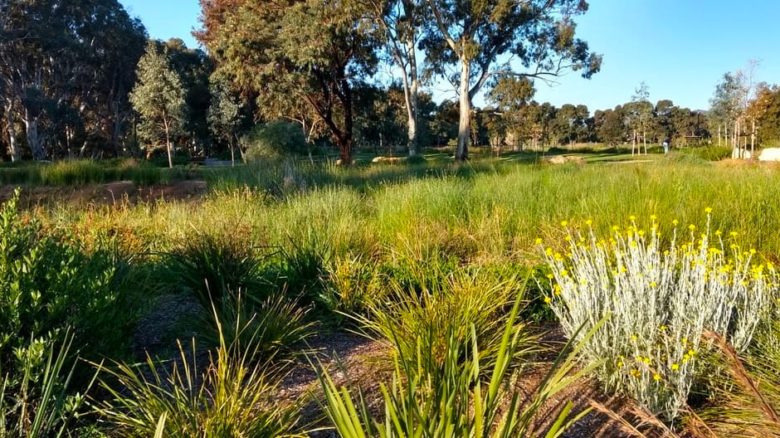 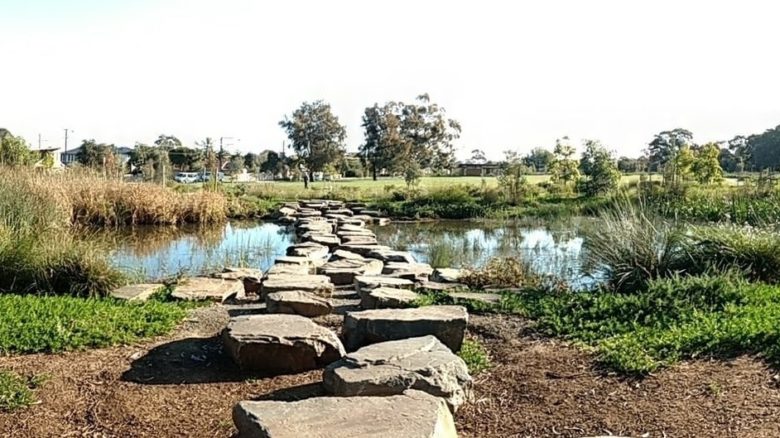 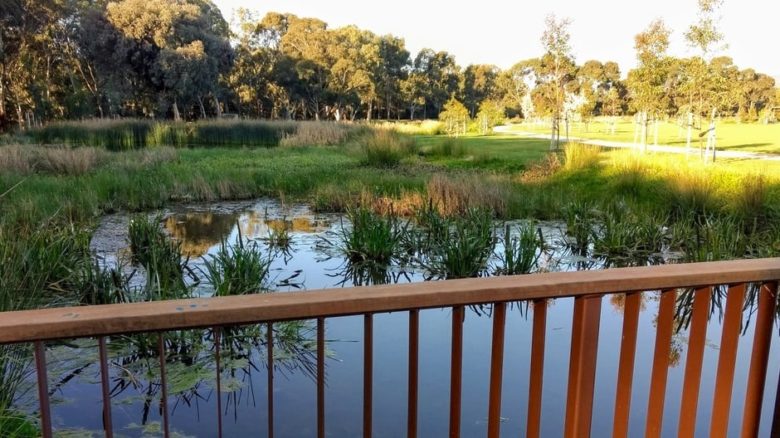 The Felixstowe Reserve project started in 2013 with site auditing and preliminary planning by the City of Norwood Payneham and St Peters. The masterplan by Oxigen was endorsed in 2015. It recognised the regional significance of the site and provided a framework that could explore its environmental and multi-layered cultural histories. Oxigen also designed the landscape and planting for the wetlands ponds. Aspect Studios then developed designs incorporating the ponds while creating further spaces and circulation for play and recreation throughout the wider reserve.

Wetlands for pleasure and (environmental) profit

Adelaide is ringed by hills that collect seasonal rainwaters feeding the plain on which it lies, located carefully by Colonel William Light, South Australia’s first Surveyor-General, midway to the sea on a slight rise on the River Torrens/Karrawirra Parri. But the city is not far from desert and water supply is an increasing concern, as it is elsewhere in Australia. Early work on the site involved planning and design for a wetland system as part of an Eastern Region Alliance (ERA) project. The ponds are just a small visible part of a massive unseen system piping water across several council areas. Aside from being a community and ecological asset, the wetland ponds clean water that is then pumped to aquifer storage for reuse on over 40 open spaces and reserves throughout Adelaide’s eastern suburbs.

Insects chirrup, frogs ribbit and pobble-bonk noisily, while many birds whistle from the reeds, splash and quack across the water and squawk overhead

A string of wetland ponds from east to west of varying depth, shape and degree of planting, fringe the north edge of the open sports field above the river floodplain. They sit within further portions of green lawn dotted with play and fitness equipment, edged by opulently flowering native garden beds. Insects chirrup, frogs ribbit and pobble-bonk noisily, while many birds whistle from the reeds, splash and quack across the water and squawk overhead. Children clamber in play spaces and tricycle along paths, dodging dog-walkers and cyclists making detours from the linear park cycle link to the city. What was a desert of neglected and very literal open space is full of life.

For the first time, this year’s various AILA state awards have identified the Aboriginal nation in which each project is located. Indigenous achievement has been particularly fruitful in South Australia recently, where Pitjantjatjara man Akea Turner has become the third ever Aboriginal landscape architecture graduate, the artwork of registered landscape architect (and first graduate) Paul Herzich, a Kaurna and Ngarrindjeri man, featured on the AILA national Reconciliation Action Plan, while his Acknowledgement of Aboriginal Country Signage project received an award for Community Contribution.

Not surprisingly, realising the potential of such a connected, layered and significant site as Felixstowe Reserve has taken time and drawn on the work of many. The award submissions list five key municipal, community and professional practice collaborators, and identify 34 individuals who have contributed to the project. Of these, Kaurna elders and many other Indigenous voices were part of the Kaurna Nation Cultural Heritage Association contributions.

A key feature of the reserve is a rare canoe scar tree, retained and identified with explanatory signage by Paul Herzich as part of an interpretive trail. The long-dead tree was only discovered in 2011 when a storm caused it to fall across a creek line. Maintenance workers clearing away branches stopped short of chainsawing the scar and reported it to authorities. The tree has been documented by David Mott of Integrated Heritage Services and is now listed on the state heritage register. David Guy of Aspect Studios recalls that around 30 Kaurna were part of the Kaurna Nation Cultural Heritage Association reference group that gave advice on approaches to building cultural appreciation of the site, including the scar tree. “We organised with council to bring everyone out to the site to see the scar tree and discuss how best to manage its place in the reserve,” explains Guy.

Aspect suggested three options, outlining the risks and advantages of each: leave the fallen trunk in place, relocate it on site, or remove it from site to a more secure location. “There was much discussion amongst Kauna elders,” recalls Guy. “But they ultimately invited the younger generation to decide, arguing that it would be their responsibility to continue protection and pass on cultural knowledge.”

It was decided to leave the tree in place, as this context was an important part of understanding its story. Aspect worked on incorporating it as part of a trail where it could be clearly seen but not easily accessed, providing signage and the opportunity to reflect on the site’s deep past. An arborist report confirmed it was sound and firmly set in the bank where it had fallen and there is an ongoing monitoring and management plan in place.

Landscape architect Jared Barnes is an Urban Design and Special Projects project manager with the City of Norwood Payneham and St Peters. He was also keenly involved in Kaurna discussions to tell the story of the site and the ongoing importance of the landscape and artefacts in the reserve. Along with the scar tree, Felixstowe Reserve contains five cultural markers developed by Herzich working with Aspect, an ibis footprint trail and some evocative steel wathuwardi (branch huts) located on the lower river embankment in the nature play area, referencing Kaurna camps. The site is part of the story of Tjilbruke, an important Creation Ancestor in the lore of the Adelaide Plains. He lived as a mortal man, entrusted with the law. His journey mourning the death of his nephew creates the Dreaming Tracks and ends with his transformation into a glossy ibis bird, known in the Kaurna language as Tjilbruke.

“Another interesting thing for me was to consider the tense of the language. At first the various signs were all written in past tense, but that seemed to suggest a lost or distant world and I felt we should really be acknowledging an ongoing, living culture” – Jared Barnes, City of Norwood Payneham and St Peters @CityofNPSP

An important consideration for Barnes has been incorporating Kaurna language within signage. He believes that encountering a people’s language – reading, hearing and learning words – is an important recognition of what is a living culture and strengthens that culture. For example there is signage with an Indigenous seasonal calendar using Kaurna words and terms that explains the cultural use – for food, medicine and making artefacts – of plants found in the wetlands.

“Another interesting thing for me was to consider the tense of the language” says Barnes. “At first the various signs were all written in past tense, but that seemed to suggest a lost or distant world and I felt we should really be acknowledging an ongoing, living culture.” It was a time-consuming but rewarding process that he hopes will be appreciated by all visitors.

The  design of the western end of the park celebrates a further layer of site history. Italians are numerically the largest group of non-English speaking migrants in South Australia, with 92 percent living in metropolitan Adelaide and a strong concentration in the suburbs around Felixstowe Reserve. In the first half of last century many took up market gardening along the Torrens Valley corridor and there remains a strong Italian community with a Calabrian Club nearby. The reserve pavilion, arbors and surrounding spaces reference this history with ordered planting of olives, grapes and fruit trees. Along with barbecues, toilets, picnic shelters and furniture, there is a bocce court and basketball. 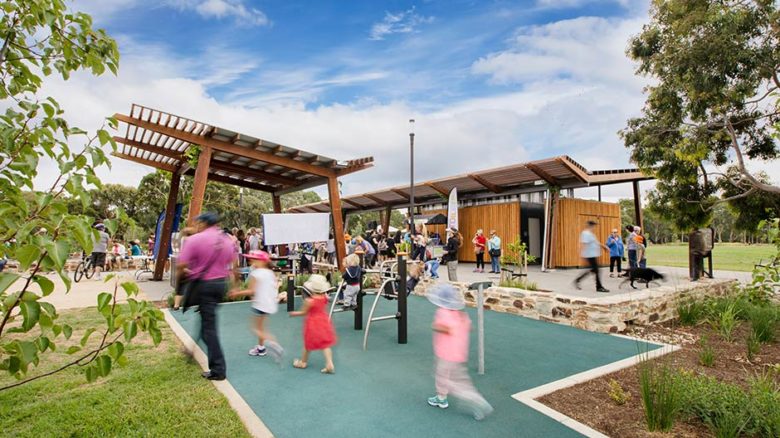 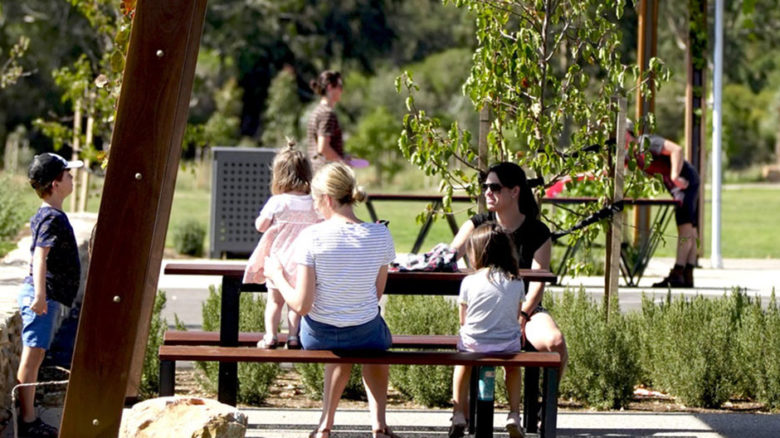 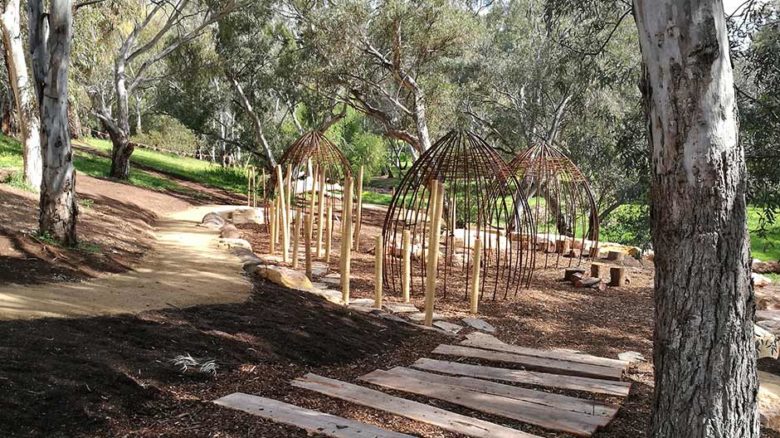 The extensive cultural layering of the site and its generous supply of recreation features and varied landscape planting make Felixstowe a popular destination. Over two thousand people attended the opening at the start of the year and many continue to enjoy the site. David Guy recalls his first visit as an initial shock. “From the street there was just dead grass in an unirrigated field and I wondered what we could do here,” Guy remembers. “But then I walked down toward the waterway with its scattered red gums and saw and felt what a magical place it was.”

The development of Felixstowe Reserve has borrowed and amplified this sense of magic by acknowledging the many voices – past and present – that bring us both joy and responsibility in the management of Country today.