Despite investment in transport, education and housing at Newcastle’s docks, businesses are still struggling and the public realm is broken. Five new pop-up projects provide a different approach to breathing new life into the old docks.

The public realm in Newcastle’s Honeysuckle precinct is “broken”, according to SueAnne Ware, head of the School of Architecture and Built Environment at the University of Newcastle. Created in the early 1990s as an urban renewal project on a former industrial site of the harbour-front, the area has received insufficient investment since then. The high water table makes it a difficult site to plant trees and build on, resulting in large areas of unshaded concrete. Shops sit vacant because of high rents on the waterfront.

In 2015, the state government passed a bill to remove the heavy rail that ran through the centre of Newcastle and replace it with a light rail. The change in legislation followed a long drawn-out legal battle involving significant local opposition. Campaigners viewed it as a retrograde move, motivated by the development opportunities opened up by the removal of the large rail corridor. Due to open in early 2019, Ware jokingly compares the replacement light rail to the monorail episode of the Simpsons. Construction has made large parts of the area near impossible to access, and local businesses have suffered. But a team of practitioners, academics and researchers led by Ware are using this opportunity to get the public to engage with, and reimagine a space that has been a source of community frustration for many years.

“Construction will end, and we’ll still be left with a terrible public realm that no one will use and ultimately, that will be bad for business too.” – SueAnne Ware

Honeysuckle Placemaking consists of five low-cost, temporary projects designed to provoke different types of engagement with the area. Four have now launched, ranging from an app telling stories of Honeysuckle, to a moveable picnic space featuring an edible garden, seats and facilities to cook food. Ware says the general response has been positive since the first project launched in July, but there have been objections, primarily from traders. “In a regional centre, the main issue isn’t housing affordability, it’s the lack of job opportunities,” says Ware. “So that’s where a lot of the resentment comes from. Instead of a discussion around the need for a better public realm, it becomes a question of ‘why are we spending money on these little follies rather than compensating businesses that have been affected by construction?’” Ware is sympathetic to the traders’ situation, especially since their counterparts in Sydney who were affected by a similar project, have been reparated generously by the state government. “But there’s still a bigger picture here,” she says. “Construction will end, and we’ll still be left with a terrible public realm that no one will use and ultimately, that will be bad for business too.”

These prickly conversations are precisely the ones that Ware wants to provoke through Honeysuckle Placemaking – it is also worth noting that she uses the term ‘placemaking’ reluctantly. As she points out “the place already exists, we’re just uncovering what’s already there and amplifying it if we’re lucky”.

The first activation, Honeysuckle Hopscotch was, to her surprise, the most controversial to date. After tracking human behaviour in the area and recording ground temperatures of 50 degrees Celsius over summer, the team decided to play around with the ‘urban heat island’ effect, by using a special type of paint to cool the space. “After talking with some local Indigenous elders, we inscribed an Indigenous word for ‘meeting place’ on the pavement in pink, as well as some buildings painted in yellow,” says Ware. “We had no idea it would trigger this reaction. Some people who used to work at BHP were deeply offended. They said we were missing out on the main history of the site. That was a very interesting conversation, around what is the history of Honeysuckle anyway?”. A large painted street mural entitled Hopscotch, was the first project to be completed. 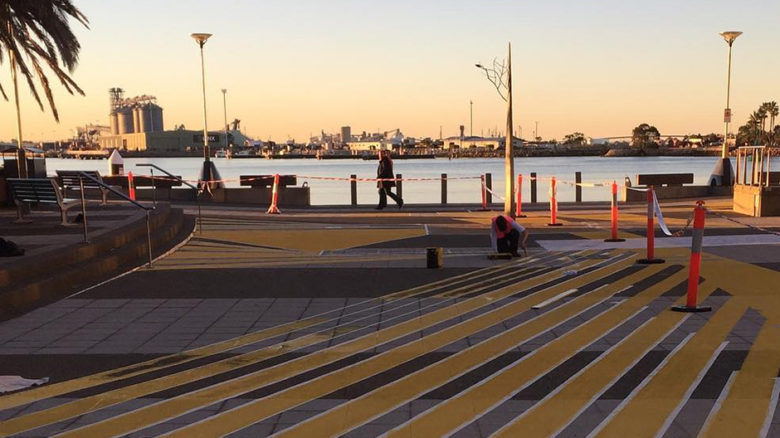 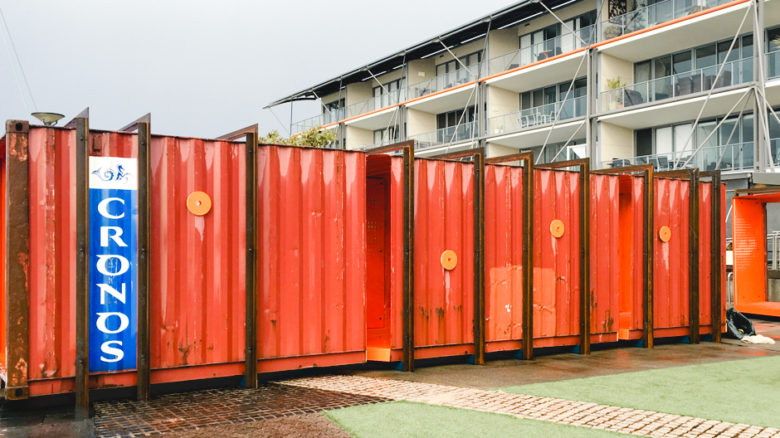 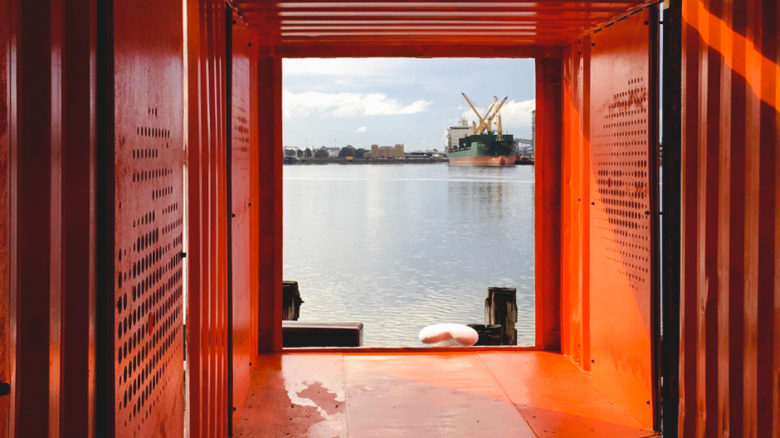 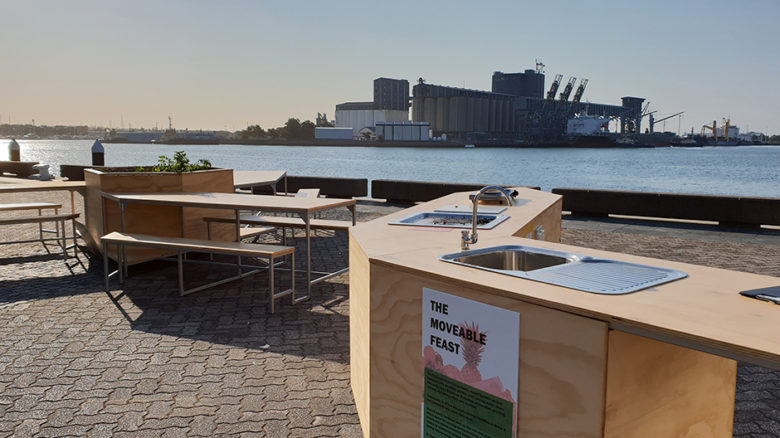 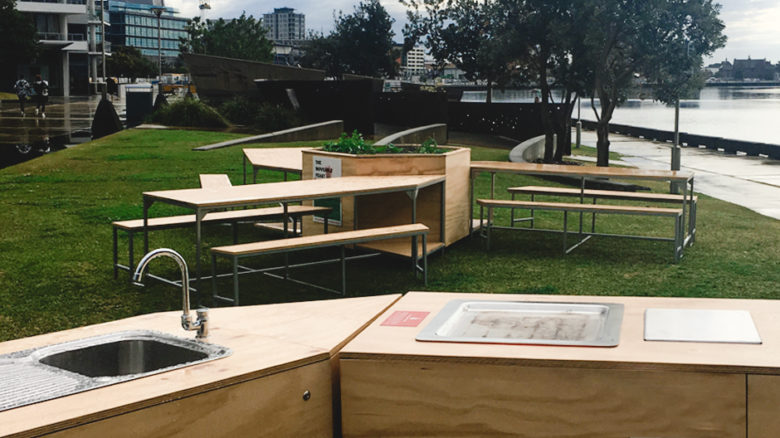 When BHP closed the steelworks in 1999 resulting in the direct loss of 2,500 jobs, a lot of people stayed in the area. “It’s very much a post-industrial city, yet at the same time it’s still an industrial city,” says Ware. “Black coal is our largest export out of the port here from the Hunter Valley, but it’s no more than 15 percent of the total industry. Yet there’s a whole psyche around the value of industry to the place.” In uncovering a multitude of pasts, Ware wants to illuminate the fact that the public realm “is not just paved over and singular, or a vanilla urban design solution. There are layers of history and uses of these spaces, and they could become something completely different in the future.”

Another installation, the Moveable Feast, is getting people to consider food security in the area. Designed for 32 people, it is a portable space for people to eat and cook as well as containing an edible garden. Amber Sauni, industrial designer and PhD candidate, has found that free food is available in the area but there is no infrastructure to store or prepare it. This is problematic for people experiencing homelessness. “In a big picture sense, I’d love to see cooking facilities installed in public spaces on a more permanent basis. Having the ability to boil water in a pot is important,” says Sauni. “The autonomy and dignity a facility like that can afford a person is huge. That’s where I see the most potential for social improvement.” Even though it’s early days, people have been interested and curious in what she is doing.

“I’d love to see cooking facilities installed in public spaces on a more permanent basis. Having the ability to boil water in a pot is important.” Amber Sauni @Amber_Sauni

Ultimately, Ware wants to get something better for Honeysuckle, because “the people of Newcastle deserve better”, she says. “And perhaps on an even smaller scale, showing students and citizens that even though these are small, relatively cheap ways of engaging the community, you can do it in different ways. If people are interested, I want them to feel empowered to go and do something themselves.” On a civic level, Ware would like to see the government and the city make a more conscious effort to understand that good public realm “doesn’t have to be master planned or kink-free. It’s about understanding heterogeneity, and that’s hard, because governments are risk averse.”

Cat McGauran is a writer and the assistant editor at Assemble Papers. Her background is in law, journalism and housing advocacy. 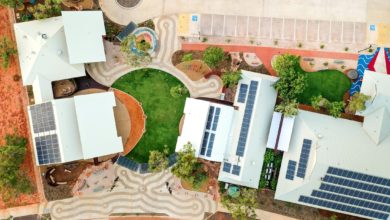 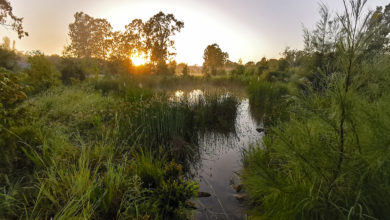