The new look of the ACT’s Constitution Avenue has received wide recognition for its visionary and stately design, which rivals the most memorable of urban boulevards around the world.

Constitution Avenue, which forms the municipal axis of the Griffins’ geometric design for the city of Canberra, lies on the northern side of Lake Burley Griffin. It is one of the three sides that make up the boundary of the Parliamentary Triangle. The National Capital Authority has a succession of plans for the Parliamentary Triangle covering 50 years. The upgrade of Constitution Avenue formed part of these plans and received $42 million in Commonwealth funding.

The strong visual impact of lighting columns and luminaires from WE-EF, combine with the natural elements of a detailed and highly sophisticated design that harks back to that of Walter Burley Griffin and Marion Mahony Griffin.

The new design by Jane Irwin Landscape Architecture (JILA) with Hill Thalis Architecture + Urban Projects has overhauled the way Canberra is traversed – improving the pedestrian journey, the driving experience, the potential to include high-capacity transit modes as well as greatly improving the civic character and functioning of central Canberra. The team at JILA recommended that the lighting component of the project be undertaken by the Sydney-based lighting and lighting design practice Lighting Art & Science (LA+S).

According to Jim Gaal from LA+S, “we received a Lighting Issues Paper that had been prepared by AECOM as a guide to the required lighting upgrade. Basically, the street lighting was required to be individual in its look without being overbearing,” he explained, adding that the lighting of ANZAC Parade was to remain visually dominant in relation to Constitution Avenue. The most obvious requirement of the lighting scheme was compliance with exterior lighting standards, as well as energy efficiency, and the ability to control and dim the luminaires using remote monitoring wherever possible.

“The main element was roadway lighting that had to comply with the V3 Category. The second element was a dedicated cycleway and the third element was the pedestrian pathway, both of which were lit to Category P2,” Gaal explained. A major feature of Constitution Avenue was the planting of oak trees, forming a significant boulevard. As part of the upgrade, a number of sick and dying trees were removed and replaced along with some 200 new trees in order to enhance the streetscape. “This required a bespoke pole that would look balanced with a high-output streetlight on a three-metre outreach arm on one side, and a lower output light on the opposite side on a two-metre outreach arm illuminating the cycleway,” he said, adding that “supplementary smaller poles were designed to illuminate the cycleways and pedestrian pathways among the oak trees.”

A trial area was set up for the new pole and luminaire arrangement that was scrutinised by a number of stakeholders in the project. The final outcome was a contemporary pole with a custom paint finish and a luminaire to suit.

“The acclaims that the project has received are extensive, including winning major awards for civil and landscape design. The lighting remains an understated element for visual activities at night while providing a safe and inviting environment,” he concluded. 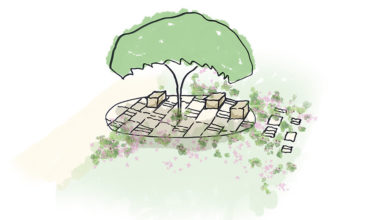