Finding the sublime in a city’s forgotten spaces: Part 1

It’s not only native animal habitat that is threatened by Increased urban density. Disused tunnels and residual urban scrub are also host to vital youthful adventure and development. They too need protecting, argues Helen Armstrong, in an exclusive extract from her book ‘Marginal Landscapes’.

Writer
Helen Armstrong
Imagery
Courtesy of the author
Posted on
May 17, 2017

When we were kids we hunted the cicada.
The pet cockatoo bit like a barracuda.
We were secret agents and fluent in pig Latin.
Gutsing on mulberries made our lips shine like black satin.
– Clive James

Do we all have memories like these? These are the reminiscences of the poet, Clive James, recalling his typical Australian childhood where children were free to roam their neighbourhoods, away from the cautious supervision of adults. Such fond memories reflect a time when landscapes helped us to understand ourselves. We marvelled at our intrepidness as we explored the weed-infested marginal places that threaded through the suburbs.

My brother and I were such children. We began to explore challenging places when I was eight and my brother was seven. We lived in an old harbour-side suburb of Sydney, where eroding tidal pools were ideal for small seal-like intruders. Fashioned in the 1920s when the early waterfront blocks of flats were built, the pools were defined by barnacle-covered sandstone walls with makeshift shark-nets stretched between. At low tide when the seaweed protected our bare feet from oyster cuts, we would crawl around the rocks slipping into the pools to play until our noise prompted sun-baking residents to shoo us away.

Many of us as adults remember wistfully similar childhood landscapes where we also were free to ramble and experiment. Making forts and cubbies, we played with siblings and friends, sometimes in gangs, often ranging over unkempt lands. Here we experienced ourselves as heroic adventurers collecting the strange things that could be found in discarded places. We imagined ourselves as fearless; our reputation hinging on displays of bravado, physical strength and dexterity. Remembered childhood landscapes, however, were not always the spaces for gregariousness; we also recall those places where we could drift alone. A view of a Sydney Harbour Pool at high tide. 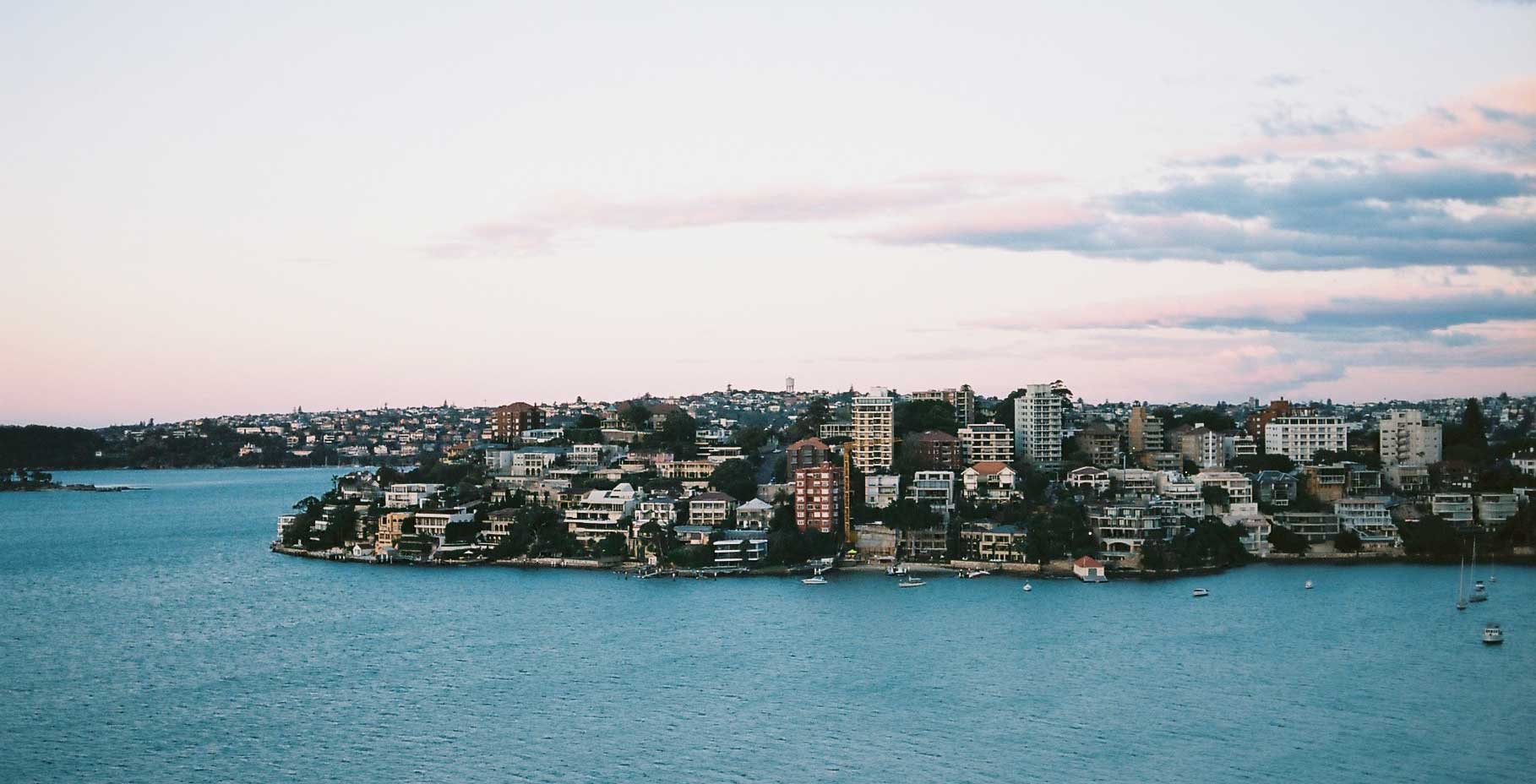 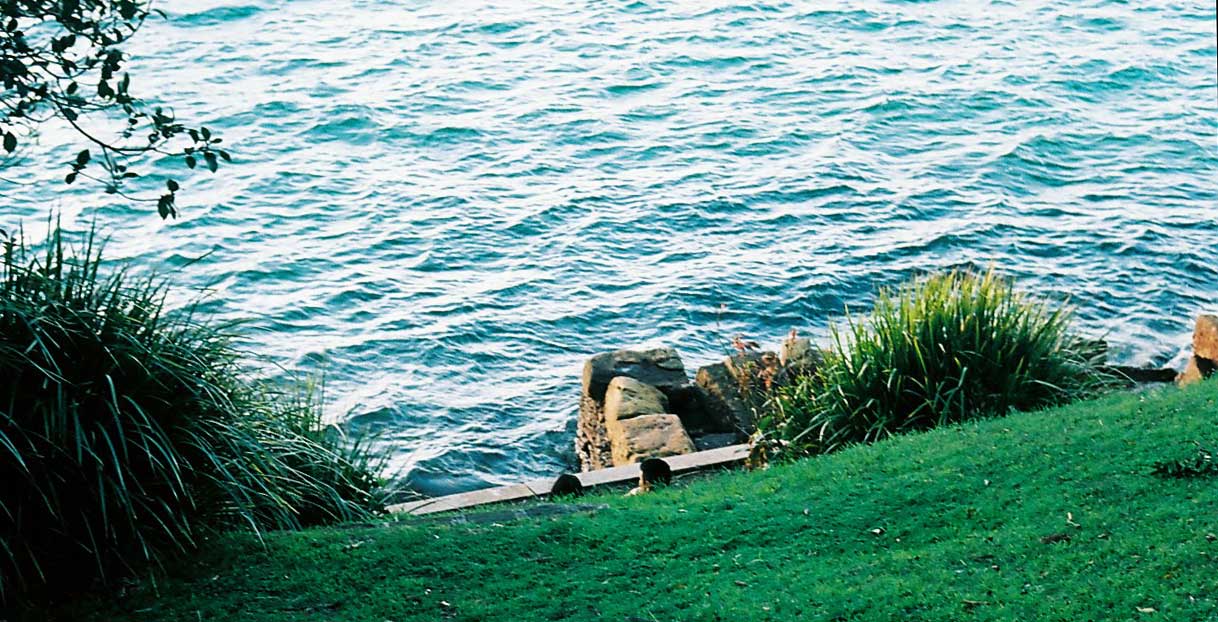 One of many harbourside streets ending in the water.

But not all our memories are pleasant, for middle childhood spans a number of years. Often we were introduced to fearful places; memories of which persist into adulthood as eerie disturbing landscapes. The acclaimed short story writer Geoff Dean, writes of his Tasmanian childhood landscapes, remembering his brothers sowing fear about playing in the local creek in Under the Mountain: “… for a start there were poisonous scorpions … And that wasn’t to mention the red back spiders that could turn a professor of what-ever-you-like into a snivelling idiot with one tiny stab of its nasty little fangs.”

How do childhood memories affect the way we feel about landscapes as adults?

It is the subtle and familiar qualities that are disappearing; things that are often only noticed by a child. The inner suburbs of Sydney have, until recently, been rich with small left over spaces. Many of the streets in Sydney’s foreshore suburbs ran down steep slopes only to be truncated by the harbour, often turned into makeshift parks.

It is as though a surveyor, sitting at his flat drawing board in an office far removed from the Harbour’s rocky knolls, drew an orderly grid of streets. When folded over the topography, the grid creaked and crumpled, particularly around its lower edges resulting in left over spaces which now dot the foreshore, some as worn grass, others as rocks with scrambling nasturtium held back by salt spray. Our neat surveyor in his white shirt and subdued tie, with his equally neat map, inadvertently created the untidy places that give children so much joy.

The street would continue for a short distance – bitumen, often two rows of Brush Box trees, sometimes two footpaths with gutters; but uncertain of where it was going, the bitumen would peter out into rough gravel and the rows of trees would falter and then stop. Later a council engineer would lay a timber log across to try to define the end to the street but it was too late; the street had already blended with harbour rocks, forming a clandestine and resilient relationship. These small, ignored, unkempt places had a quiet defiance and it was here that as a young girl, I buried my treasure; a small tin containing pieces of broken coloured glass – glistening jewels that I had collected in my wanderings. This tiny tin of treasure may still be there today.

As a child, I somehow knew these were special places, so today I particularly mourn the changes from intimate permeable foreshores to the new fortified high-rise complexes where bland waterside promenades are a poor exchange for the intricacy that fed my imagination.

Our neat surveyor, with his equally neat map, inadvertently created the untidy places that give children joy

Alone on the Urban Margins

It is easy to love picturesque landscapes of green parklands with tall trees shading meandering streams; but urban life is complex and as such, more intriguing. Marginal places can be just as evocative as city parks. DBC Pierre describes such landscapes in Vernon God Little, where a young adolescent on a bicycle comments on the wasteland on the edge of an American town:

Bushes on Keeter’s trail are bizarre, all spiky and gnarled, with just enough clearing between them so the unknown is never more than fifteen yards away… Old man Keeter owns this empty slab of land, miles of it probably, outside town. He put a wrecking shop by the ole Johnson road, Keeter’s Spares and Repairs – just a mess of junk in the dirt, really. …mostly just bleached beer cans and shit.… Martirio boys get their first taste of guns, girls and beer out here….You never forget the blade of wind that cuts across Keeter’s.

This raw landscape could be at the edge of any town. The US writer Robert Pyle, whose childhood haunt was an old irrigation channel near his home, proposes: “These are the second-hand lands, the hand-me-down habitats, where you have to look hard to find something to love”.

These places on the margins, often derelict sites, may look untidy and useless, but they treasured places for the children who are able to retreat into their crannies to hide and reflect on their unfolding world. Perceived by adults as disturbing landscapes they are in fact breathing spaces in contrast to the claustrophobic new developments which have replaced them. In the neat and tightly-packed, over-designed and fortified new places, where does a child today slip away to dream?

What complicated stories and secrets have the new bland high-rise apartments erased? The overgrowth of a harbourside park. The urban fringe coming into contact with the bush. 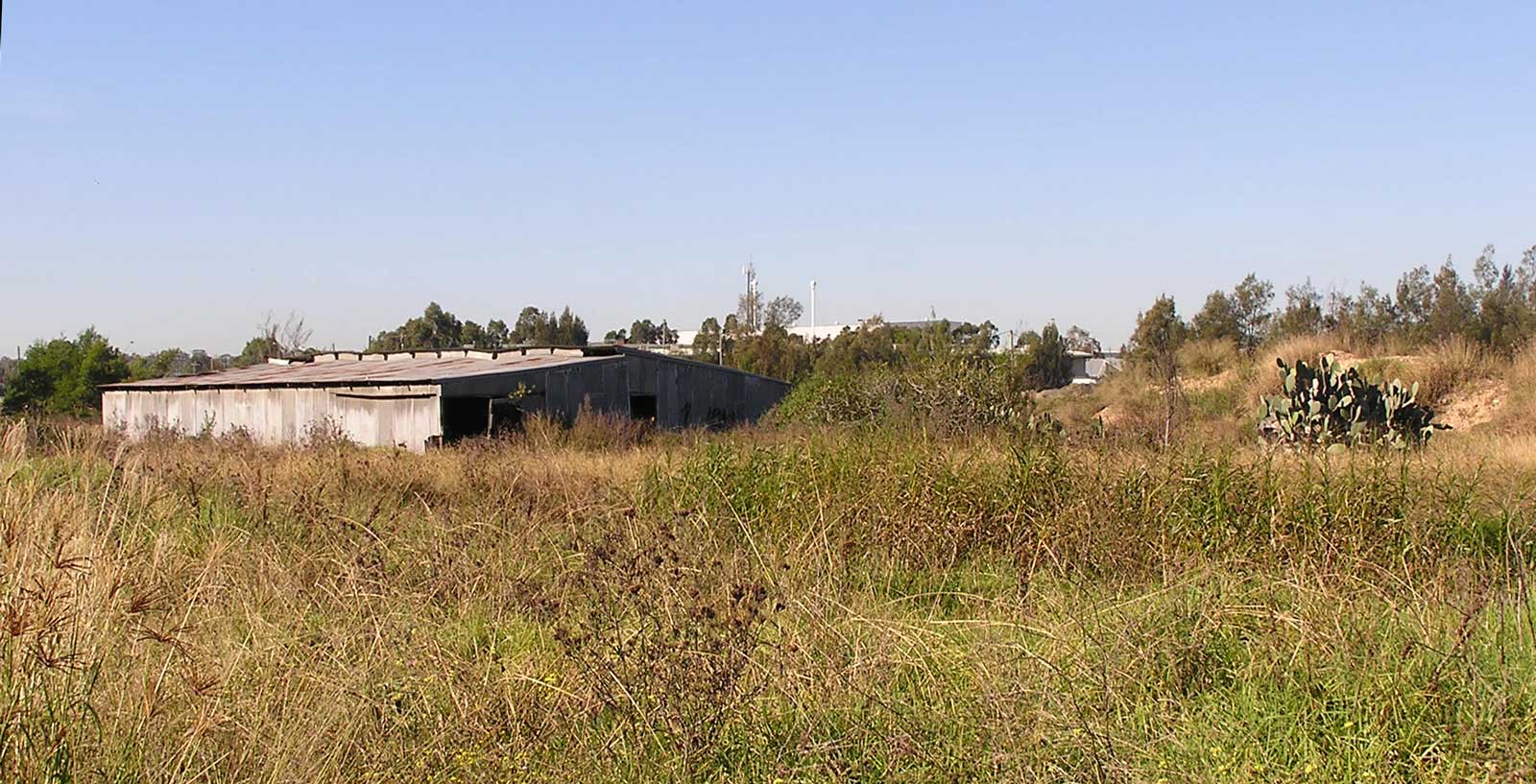 A view of a disused lot.

Richard Louv has described places which convey a sense of quiet reflection; however marginal places are also ideal for rough and tumble play. Brett, an architectural photographer, describes a new bridge over a narrow valley:

…a new concrete bridge was built near where I grew up. This left the old bridge, a fabulous wooden structure perched on massive tree trunks, and its feeder road suddenly closed off. The feeder road wound steeply down round the camber of the valley, whereas the new concrete bridge spanned directly across. This, overnight, became the most perfect place for all the local kids to hang out. The sweeping curve was the testing ground for ever more flamboyant billy-carts. A hair-raising ride ended with luck on the landing pad of the bridge at the bottom.

The old bridge and its feeder road in unkempt urban spaces were particularly suitable for displays of bravado and physical skill to be witnessed by local kids. This place also encouraged ingenuity and trial and error testing as they constructed their various unstable carts, intended to accommodate numerous children. Spaces under bridges were also important for growing boys to learn about the rights of passage into adolescence, as Brett describes:

…underneath the bridge there was a darker atmosphere. Here younger kids were exposed to the education of older kids bragging. Smoking was tried, sex was debated. The brilliant, dangerous fireworks of those days could be placed into holes in the bridge foundations rendering an explosion not unlike that of cannon.

Underneath bridges there were darker atmospheres. Smoking was tried, sex was debated

The fun and adventure of middle childhood can persist long into adolescence, becoming somewhat more dangerous. Marginal lands are the ideal places for adolescent anarchy. Again Brett recalls how, as a group of adolescents, he and his friends found places where they could continue to test their responses to fear, such as the railway yards at North Sydney:

…A highlight adventure undertaken by my peer group was to walk along the old railway line to Milsons Point. At one stage you had to walk through the tunnel that goes under the Headland. It was a curving tunnel and there came a point where the light from the receding end disappeared before light from the approaching end came into view. Although we really knew that it was unlikely that we would encounter a train, we kept this to the back of our mind to add suspense. The story of someone’s friend of a friend, who had been maimed by a train at the dark heart of the tunnel, was always told…

By adolescence, they can discuss and consider danger while still testing themselves. The idea of a tunnel penetrating the unknown has frightening appeal; that moment when there is no light taps into the primal sense of the abyss. Although they would have been unaware of the psychological implications of these disturbing spaces, they could also simply play like children in these abandoned areas.

These are the stories about left-over spaces and abandoned sites in Australian and North American cities. They describe a time of freedom from adult supervision. Adults remember such places, whether experienced alone or in boisterous gangs, as highly significant parts of their childhood. But is this true of all childhoods? Do all children regardless of their culture need unrestricted places, free of adults, to explore and imagine?

Dr Helen Armstrong was the Inaugural Professor of Landscape Architecture at Queensland University of Technology 1997-2003 and now is Professor-Emeritus. She has a long history as a practicing landscape architect, Adjunct-Professor, former Centre for Cultural Research. She has been a visiting scholar at numerous overseas universities and her work is widely published. Her particular interest in marginal urban landscapes has resulted in new perceptions of landscape in the context of post-urbanism and the book, Marginal Landscapes.

This is the first of two extracts from the book Marginal Landscapes available at iTunes.

This article is part of Foreground’s Cities for Children special. Click here for more in the series