Tasmania’s Glenorchy Art and Sculpture Park is not only an award-winning piece of design. It has become an important cultural stage for exploring our relationship to place and to the Derwent River.

The Glenorchy Art and Sculpture Park (GASP) is no stranger to awards. In 2013, Stage One of the GASP project received the Urban Design Award from the Australian Institute of Architects. Then in 2014, it won the same award for Stage Two. Designed by Hobart based architectural firm Room 11 with landscape architects McGregor Coxall, the arcing rainbow hued boardwalk of Stage One and the huge panoramic red glass window in the cantilevered concrete structure of Stage Two have become iconic features of a site that encompasses nine hectares of open parkland from Wilkinson’s Point to Montrose Bay.

The awards are well deserved. For the past three years, GASP has sustained its appeal as a highly usable public space. With multiple points of interest to travel to, GASP has reclaimed a stretch of coastal land once disconnected from Hobart’s northern suburbs by the busy Brooker Highway. It has transformed the site into a place imbued with its history as an industrial area and natural habitat for birdlife and native plants. Kids ride bikes on the level pathways, people walk their dogs and have barbeques in the ironbark clad Grove Pavilion.

The transformation of the GASP site was instigated and developed by Pippa Dickson and is now led by director Jonathan Kimberley. In the 1950s, the GASP site was a popular place to swim, yet after decades of encroaching industry, the water quality deteriorated and public use ebbed away. In 2008, consultations with the local community and arts leaders led to a plan to reclaim the site as an area reconnecting locals with nature, local history and arts culture. People wanted a sensorial place, a place where they could smell the salt of the sea, feel the westerlies blowing in and hear the river moving.

In an interview with Janne Ryan for Radio National’s By Design, Room 11 architect Thomas Bailey described their design as ‘furnishing the landscape’, an explanation aptly capturing the subtle way the buildings and pathways of GASP interact with the surrounding environment. When you visit GASP, it is immediately evident water is the major player and it is a theme returned to often, particularly in the sweeping arc of the boardwalk. The majority of the site hugs the Derwent River foreshore, with nature and its movements a key experience. Diving cormorants and black swans come and go and those traversing the boardwalk from above the tidal mudflats are rewarded with a unique perspective of the environment not available from the shoreline.

The structures of GASP are deeply connected to their surroundings. Through their design and materials, not only do they reflect and enhance the natural environment, the sites on which they are built also hold the history of place. The cantilevered building at Wilkinsons Point is positioned on land that was used as an industrial site for the construction of the nearby Bowen Bridge and also for the reconstruction of the Tasman Bridge arch after it collapsed in 1975. The use of new and recycled concrete reflects the materials used to construct the bridges and links back to the industrial commerce that remains a backbone of Hobart’s nearby northern suburbs.

In addition to the natural atmospherics of the site, a major focus of GASP is the installation of permanent and temporary art. Most recently, GASP has collaborated with environmental arts organisation, Carbon Arts, to facilitate Swimmable! Reading the River, a three-year project commissioning contemporary artists to create site specific works addressing the environmental issues faced by the Derwent River. Polluted by decades of industrial runoff, the Derwent is contaminated by heavy metals like mercury, copper and zinc and is no longer safe for swimming. During community consultations in 2009, the idea for Swimmable was raised when a local 17-year-old student expressed her desire to instigate environmental change, to find a way to make the waters of Elwick Bay swimmable again.

Taking the open air location into account, most of the works are data-driven and artists have used elements of sound, light and text to create evocative forms of storytelling. ‘Swimmable simply asks, what makes a river swimmable?’ says Kimberley. ‘It demonstrates the answer is never fixed – like humanity, it must move both with and against the flow.’ Justy Phillips & Margaret Woodward, 'Fall of the Derwent' for Swimmable 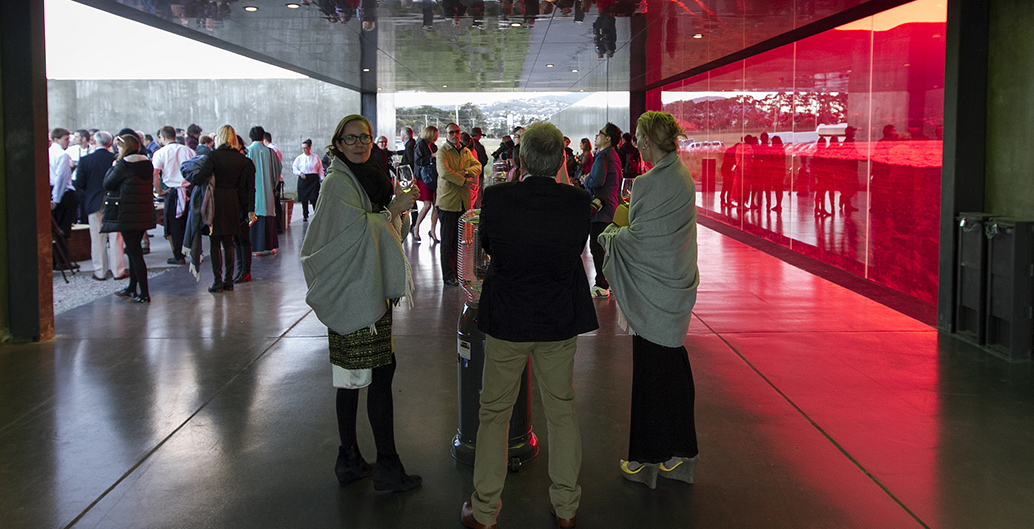 Lunch is served at GASP 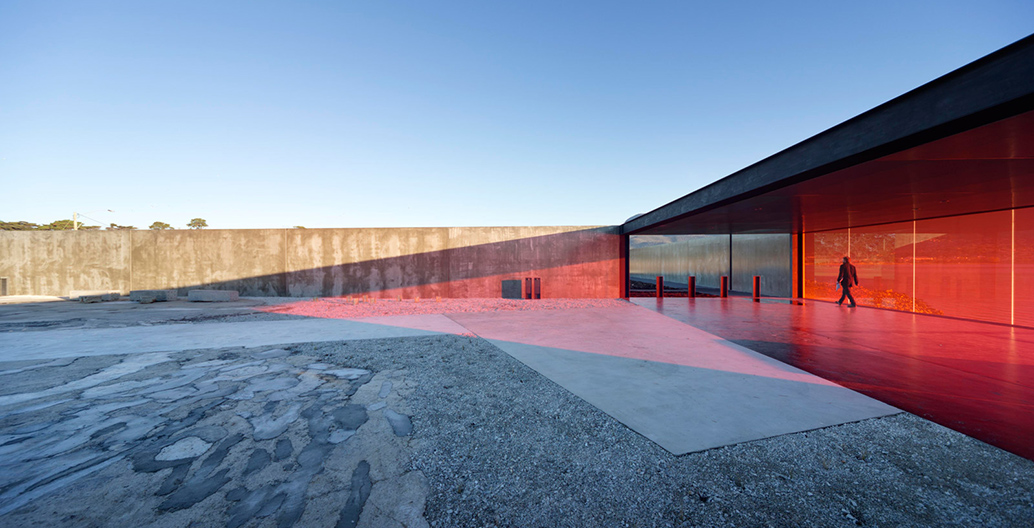 Following the installation of Natalie Jeremijenko’s Amphibious Architecture, an interactive piece that lights a path through the waters of Elwick Bay, the next contribution to Swimmable is Fall of the Derwent by Justy Phillips and Margaret Woodward. Here the artists use a five-part written score of downloadable text to weave a narrative reflective of the river’s journey from sea to source. From 1 December, visitors will be able to access the score via QR code at Wilkinsons Point. Governed by the fluctuating levels of hydro energy within the Derwent River system, only a certain percentage of the narrative appears at any given time, creating verses of abstracted prose literally conducted by rainfall and levels of water stored by Hydro Tasmania.

One kilometre away from GASP, the tides of the Derwent River also lap at the outer limits of David Walsh’s Museum of Old and New Art (MONA). GASP grew up in the shadow of MONA and as neighbouring locations embracing art, it makes sense that there are frequent connections between the sites. Food and art have been the focus of these connections and Wilkinsons Point was used as a backdrop by MONA for a Restaurants Australia campaign with a guest list that included renowned chefs Heston Blumenthal and Matt Moran.

It is hoped that as people engage with GASP and the stories it tells, through award-winning architecture, contemporary art and community events, a greater understanding of its environmental qualities will be embraced, so that in time the waters of Elwick Bay will return to a healthier state.

GASP is a site imbued with history. Its architecture and long stretches of pathways conscientiously engage with that history, through the creation of a shared space that connects directly to the local people and the environment.