Current models of medium-density housing have led to poor environmental outcomes in Perth’s suburbs. But a new take on suburban development proposes to revitalise neighbourhoods through a more collaborative approach.

There is an urgent need for cooperation between urban actors to imagine and deliver alternatives for infill housing. Engagement and landscape-led processes that welcome people in as contributors, rather than just commentators, are critical.

Place Value Ashfield is a UWA School of Design and Future West (Australian Urbanism) research project that explores the potentials of a coordinated approach to infill housing in the suburb of Ashfield in Perth, Western Australia.

Infill housing has been done poorly across Perth and other Australian cities. When we hear of the rise of ‘urban heat islands’ and the declining ‘urban forest’ in Australian suburbs, poor infill development is often the cause. Blanket density increases to enable infill housing have not yet been applied in Ashfield. There is an opportunity in Ashfield to do density differently and do it well. The emphasis in Place Value Ashfield is to ask how infill can support the landscape in which it is situated, to strengthen the ecological and civic realms of the suburb.

Over 12 months, the project was driven by the landscape coordination team (To & Fro Studio and Daniel Jan Martin). The team designed the process, carried out extensive site analysis and community and stakeholder engagement, and created a suburb-wide landscape strategy.

Six design teams (consisting of architects, landscape architects and developers), designed medium-density housing schemes in relation to Ashfield’s context and this coordinated suburban strategy. Each team was allocated one of six site groupings (each grouping consisting of multiple lots) across the suburb. Together, the collaborators set out to explore how better models for infill housing could be developed through a landscape-led approach.

Schemes were guided by an overarching landscape framework between rail and river, between the Ashfield Station and the Bilya – Swan River, with the aim of demonstrating how housing regeneration can respond to existing values of place. Design teams were asked to imagine that these site groupings represented the ownership of the Department of Communities, which owns a quarter of residential properties in Ashfield, to enable the realisation of a suburb-wide strategy. 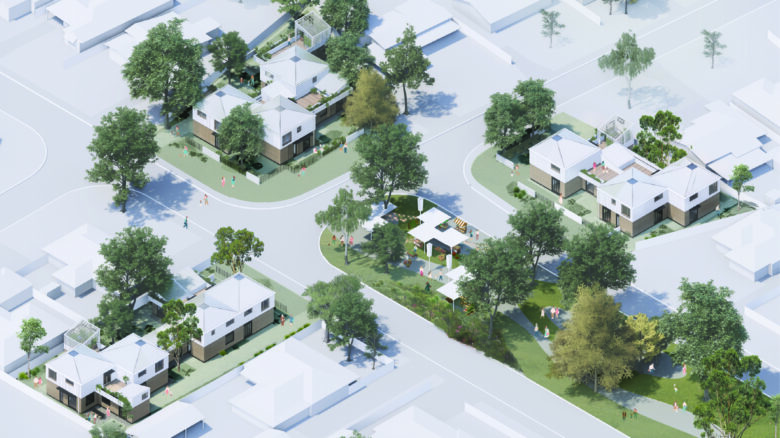 The suburb-wide landscape framework, coordinated to support density and strengthen the public realm between rail and river. The impact of poor infill housing. A comparison of the Perth suburb of Stirling between 1992 and 2020. Central to the landscape framework was to celebrate the Ashfield Flats wetland system and the flows of water through the suburb. Image: Loren Holmes A three-stage process, facilitated by the landscape coordination team (Daniel Jan Martin, Rosie Halsmith and Loren Holmes), enabled multiple levels of collaboration and knowledge sharing to take place between community, stakeholders and the six multidisciplinary design teams. Stakeholders included state government representatives the Department of Planning, Lands and Heritage (DPLH) and the Department of Communities; local government representatives the Town of Bassendean; industry representatives the Urban Development Institute of Australia (UDIA); and community interest groups Design Basso Advisory Committee and Ashfield Community Action Network (AshfieldCAN). On top of garnering local interest and support, the engagement approach enriched the design process by weaving local expertise and input into multiple critical milestones. The coordinated approach allowed teams to think and work across scales: from the scale of the lot, to the coordinated group of sites, to the entire suburb. This resulted in the design of multi-scaled spatial outcomes that were collectively developed, integrating the thoughts of many.

“Coordination, collective action and engagement processes that welcome people in as contributors, rather than just commentators, are critical to imagining and delivering alternatives for infill housing.”

During the first stage, the landscape coordination team undertook extensive analysis to set the scene for design teams to take part in shared, broad-scale thinking about the issues at play. Key to the analysis was a series of conversations with community members and stakeholders. The landscape coordination team presented early analysis to community groups, the Town of Bassendean and the Department of Communities, to ensure that their knowledge of Ashfield was integrated. These conversations also played a communication role, making sure that people essential to Ashfield were informed about what was happening in their place.

A suburb-wide landscape framework – a spatial strategy with associated principles – was developed to guide the public realm to offset and enhance an increase in urban density. At a suburb-wide scale, the framework links the rail to river through an upgraded public realm, and at a site grouping scale, it enables connectivity between dwellings and their context. The streetscape is utilised as a permeable and legible movement corridor and public open space in its own right. Alongside strengthened connections, well-maintained public open spaces are enhanced to create amenity that serves a diverse representation of the Ashfield community.

Central to the framework is the need to respect the vitality of the Ashfield Flats wetland system and the flows of water through the suburb. Blue and green infrastructure networks are strengthened, bolstering vital and diverse urban forest and vegetation matrices, throughout backyards, verges and public open space.

In Ashfield, the possibility of spatial coordination was reinforced due to a high proportion of Department of Communities-owned land and other public-owned land in the suburb. The framework taps into the potential for the lots for infill housing to be sited with suburb-wide civic and ecological benefits in mind.

Midway through the design stage, teams presented their early responses in an open forum. The project’s open and consultative process was critical to this stage, as it allowed for holistic, rather than parallel, iteration. As individual schemes developed, so too did the suburb-wide landscape framework. Input from design teams led to the reinforcement of particular corridors to the river, as well as the inclusion of public open spaces in response to the development of the housing schemes.

Schemes were presented back to community groups whose input was incorporated into the project’s first stage. The open process, early integration of community input and continued conversation around values allowed for conversations around an issue, or a problem to be solved – and discussions of the multiple ways in which that design could respond to this problem.

Ongoing densification in Perth has resulted in poor environmental, public realm and architectural outcomes. Coordination, collective action and engagement processes that welcome people in as contributors, rather than just commentators, are critical to imagining and delivering alternatives for infill housing. Place Value sets the groundwork for ongoing conversations between architects, developers, landscape architects, community representatives, planners, policymakers and the Department of Communities. The Department of Communities remains as one of Perth’s largest developers of infill housing, and with this comes an opportunity to influence the direction of medium-density development, and to test best-practice models that move beyond ‘business as usual’.

In this context, one of the key strengths of the Place Value process is its flexibility. External input will continue to influence the project as conversations with key stakeholders develop. Processes for conversations with Traditional Owners have begun, with space for this knowledge to have an impact upon the project as it evolves beyond the production of this document. Should Ashfield move from research to real-life action, an expansion of process to allow for a wider range of voices – both from client and community sides – would allow for the collaborative development of values that are driven by people as well as place. As a further expansion, the Place Value process could be shifted and expanded to adapt to a different scope, a different place, and diverse groups of knowledge holders.

In asking how we need to place value in times of urban transformation, Place Value Ashfield challenged architects, landscape architects, developers, government authorities and the community to imagine how design, enterprise and landscape ecology could work together to get better results for places and people. Through its exploration of how housing density can be designed in a way that places importance on a range of values, including economic values, the project offers an approach to development that is quite divergent from Perth’s current development status quo.

This article is an abridge version from the eighth issue of the magazine Future West (Australian Urbanism) which will be launched on 29 July 2021. More information about the design research can be found at Place Value Ashfield.