Verges are publicly-owned but resident-maintained strips of green space found all throughout our suburbs. Symbolic spaces of transition, they are places where public and private intersect, a kind of ‘incidental green space’ that is in-between, ambiguous, and ill defined. Even though they use large amounts of public space, verges typically act to protect or extend the generous setbacks enjoyed by many Australian private houses. Managed well, though, they could just as easily be used to improve social ties, mental and physical health and even feed a neighbourhood.

Urban Food Street (UFS) is an eight-year-old, community-led food production and sharing project in Buderim, Queensland, that transforms suburban verges to do just that. Co-founded by local residents graduate architect Caroline Kemp and horticulturalist Duncan McNaught, UFS incorporates almost 200 households across 11 streets and has turned what was once incidental green space into a productive landscape of fruit trees and vegetable gardens.

“In a few months, in just one verge garden, we did 2500 units of winter greens” – @URBANFOODSTREET

In early September, I met with Caroline and Duncan here at the Australian Urban Design Research Centre. They were in Perth to speak about Urban Food Street, with the support of Chris Cornish, Councillor at the City of Bayswater, who have been promoting edible plantings on residential verges. Their sold out event was one of many opportunities they had for discussing their ideas but they kindly made the time to discuss their story and the values that have driven the Urban Food Street model.

As Kemp explains, for Urban Food Street the imperative to grow food on available land in their neighbourhood came from a simple desire. “To get a neighbourhood pantry of herbs,” she says. “Then we can send one of the kids two streets away to pick it.” In a suburb where purchasing store-bought herbs included a 40-minute round-trip by car, such small-scale interventions could have a big impact on people’s lives, as well as the environment. As her fellow founder McNaught adds, “We are just thinking big picture, and urgency.”

“There’s this kind of fallacy out there … that our suburban nature strips can’t produce tangible amounts of food,” Kemp says. “In a few months, in just one verge garden, we did 2500 units of winter greens. So that’s just one verge location in one street that you could have replicated that dozens of times…” 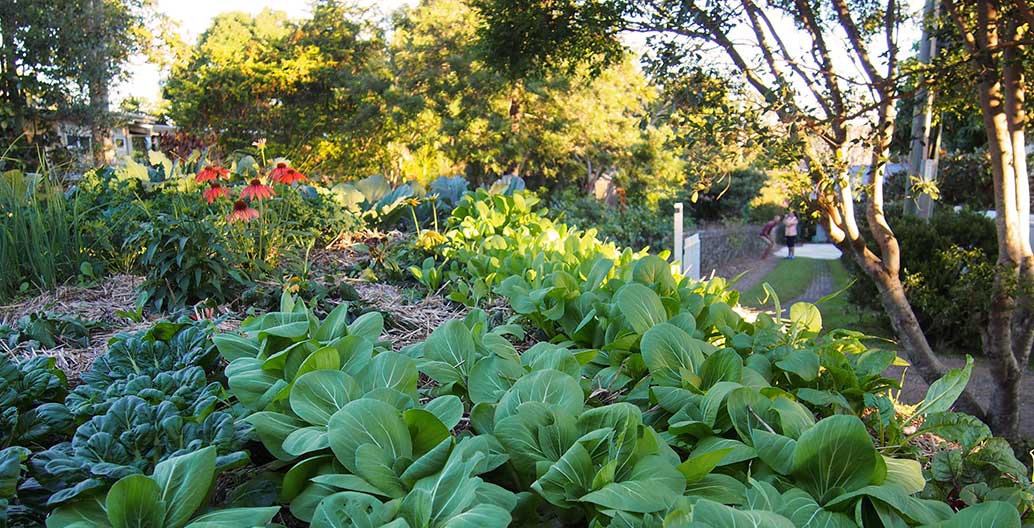 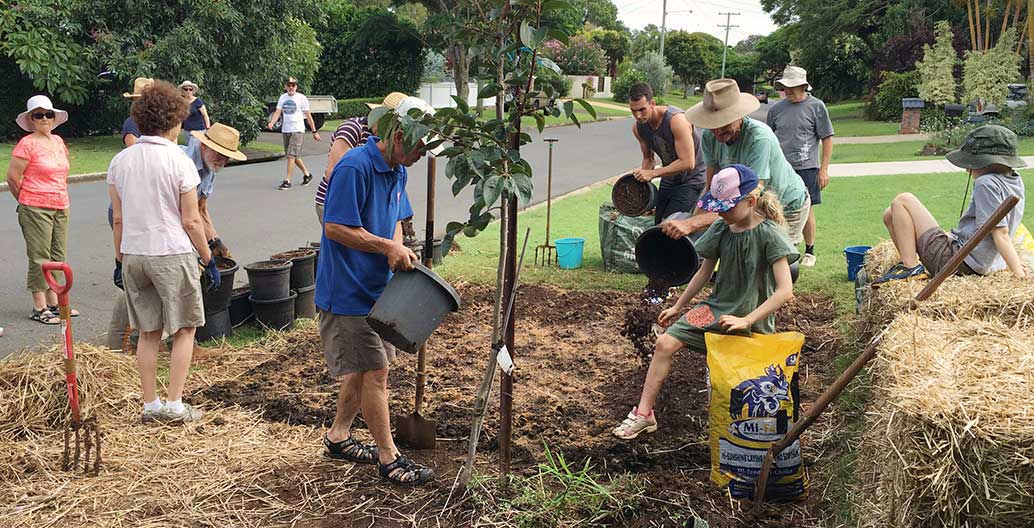 Earlier this year, the Sunshine Coast Council pushed for the residential participants of Urban Food Street to retroactively apply for permits and public liability insurance – a measure not required of residents with ornamental gardens. The cofounders refused, as did around half of the residents. The council subsequently removed 18 mature fruit trees belonging to landholders. The episode points to problems in the way we manage risk in our public spaces, as well as to problems in the way we understand and make use of our suburban landscapes.

With the limited number of green spaces peppered throughout our cities, the glaring mono-functionality of the verge seems outdated. It also depends upon a strange separation of things like street verges, tree canopy, parks and playing fields, as if they are independent of one another and can be managed as such.

Using verges to produce food produces positive by-products. Research published in Health & Place journal has found that “ordinary spaces provide space for social interaction, which can provide relief from daily routines, sustenance for people’s sense of community, opportunities for sustaining bonding ties or making bridges, and can influence tolerance and raise peoples spirits.” These spaces were not ‘formal’ places, like large parks, but spaces that were integrated into the neighbourhood streets.

Street verges are overlooked as sites of community interaction, and food production creates a reason to be out in front of your house, chat with your neighbours, and take a walk around the streets. So a productive landscape can be a means to an end.

“Food is the catalyst to get the social cohesion,” Kemp tells me.

“But not only that,” McNaught adds, “you get a lot of [other] advantage from it. All of a sudden, you’ve got people out regularly walking that kilometre distance to see what’s around, the verges, so you get people moving.”

With the limited green space in our cities, the glaring mono-functionality of the verge seems outdated

This bottom-up model privileges the everyday and informality, and it creates a living, ever-changing infrastructure that delivers ecosystem services to create ‘moments of delight’ in the environment.

Community cohesion is hard to implement or encourage from top-down initiatives, but highly sought after once established. The sense of safety, especially for children, was one noticeable development.

“Our children…on weekends in particular… you stay within that area, and take your little brother…” McNaught recalls.

Urban Food Street’s enviable success was not despite its bottom-up culture and lack of formal organisation, but because of it. As Kemp and McNaught describe it, they tried to ‘de-structure’ the organisation as much as possible. Promoting a communal and opt-in system where no money changed hands created an inclusive but creative culture where residents could tailor their experience to their lifestyle.

It is this model of ‘non-structure’ that is the real success of Urban Food Street.

For Kemp and McNaught food is a means to a shared economy, and the verges are an obvious neglected site. But the aspect most transferable to other contexts is the idea that communities can initiate systems based on their specific needs, which work for them. As Kemp says, we must “think about the social site”.

So rather than look at what the Urban Food Street program achieved and try to implement it wholesale, we need to ask questions of our local sites and see what values and openness can be translated, allowing for organic, messy, non-linear progress.

In doing so, the study of Urban Food Street affords us the opportunity to reimagine suburban landscapes as sites of locally-driven production; sites which can be reworked to suit current and future needs for community and shared resources.

Dr Zoe Myers is a researcher and lecturer at the Australian Urban Design Research Centre (AUDRC) at the University of Western Australia, where she contributes to state and local research and design projects, and teaches in the Master in Urban Design.