Landscape Conversations is a new podcast by Anton James, exploring the diverse ways in which landscape is worked in, thought of and defined. Foreground brings you a podcast excerpt, a conversation between Anton James and award-winning landscape architect Kathryn Gustafson.

Anton James: I am interested in how you formed your perception of landscape?

Kathryn: I think you become aware of things over time and it’s not evident in the beginning why you like certain things, or why you’re comfortable with certain things. I remember people always saying to me, “You do these big folded landscapes because you’re a fashion designer” [Gustafson studied at New York’s Fashion Insitute of Technology]. It actually has nothing to do with fashion. It has to do with where I was raised. I was raised in a high plateau desert that had mountains without any trees on them and you could see the bones and the softness of the mountains. They looked like bodies and folds.

I’d walk into that landscape and I’d feel comfortable. That’s where I was raised, with its light open skies and its water channels. The water is channelised because it’s coming from big reservoirs in the mountains. So it’s not natural rivers. It’s actually artificial water, brought to you through a series of channels. This channelising of water with rigid structure next to a very soft structure of these mountains, all comes from where I was raised.

In Europe it’s a more articulated landscape, with a relationship to man rather than nature.

I remember being at Versailles, and people were saying, “your scale of space is much bigger than ours and what you’re comfortable in, is much bigger”. It’s absolutely true. I’m comfortable in very large spaces. In Europe it’s a much more articulated landscape, with a relationship to man rather than a relationship to nature. It’s quite different and I think when you’re starting to learn landscape, you’re taught certain historical principles, of Italian gardens, of French gardens, and also what is composition in contemporary art. So all of those things are part of your education. Somehow there’s this moment of osmosis, between who you are and what you’ve learned, and something else comes out the other side. 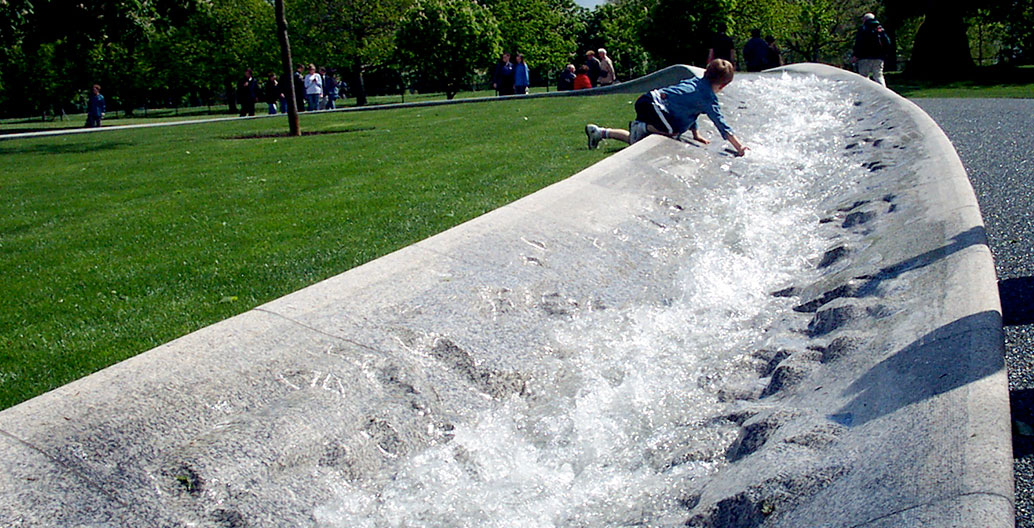 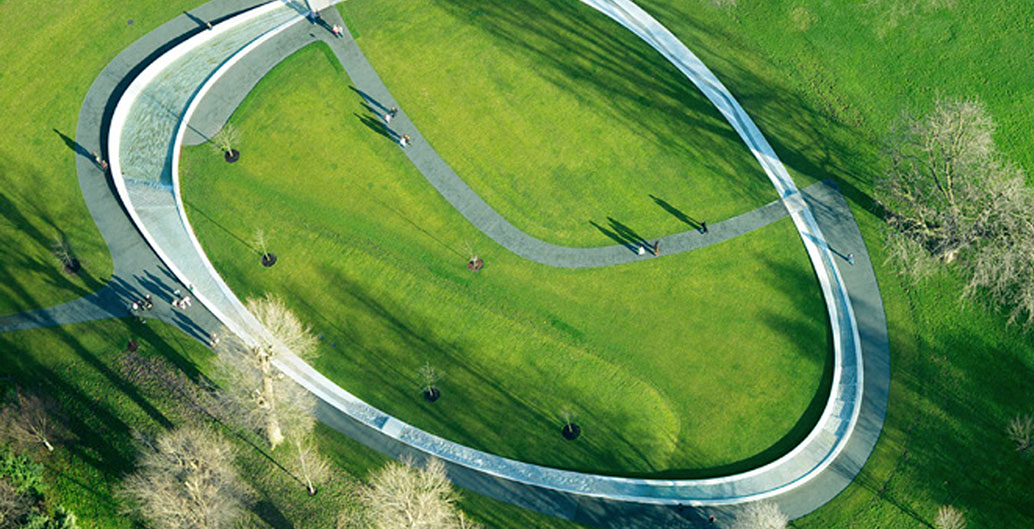 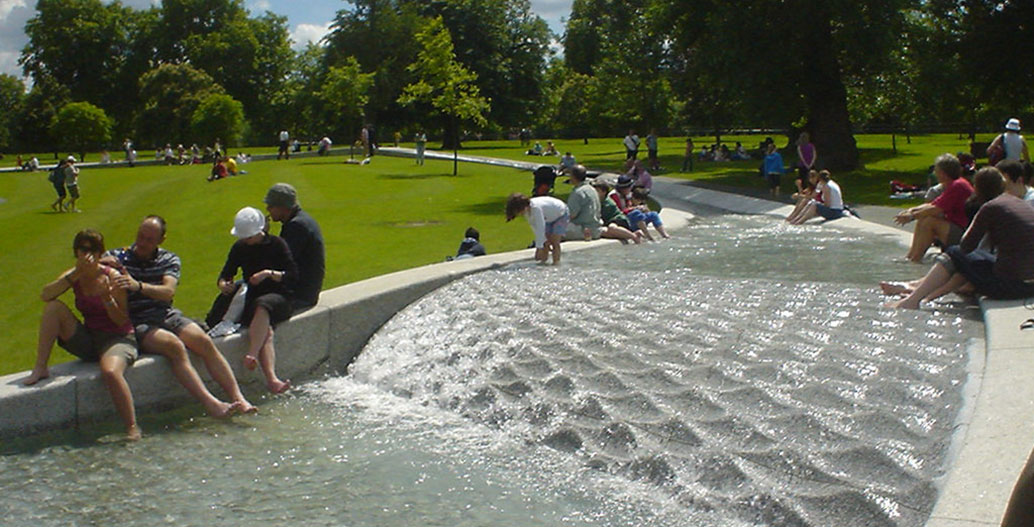 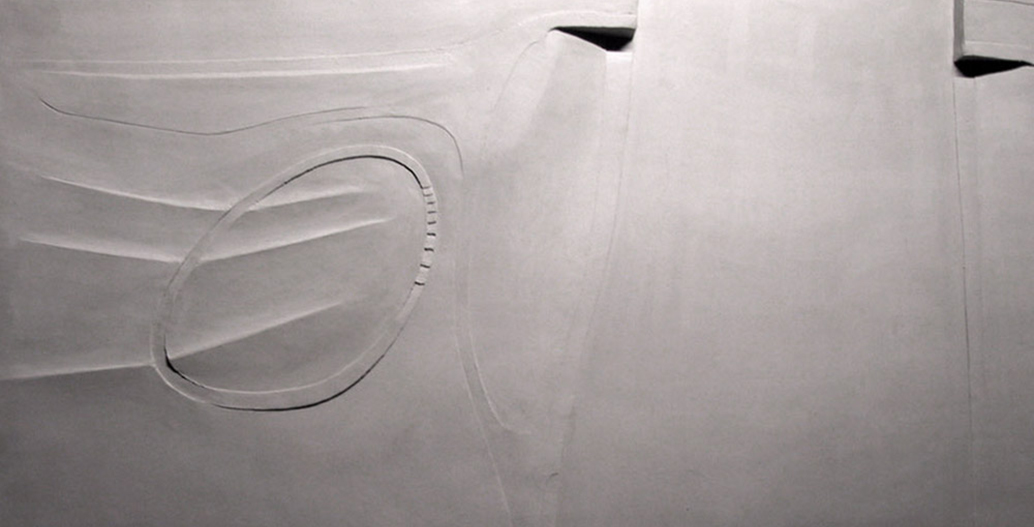 Anton: How did you find the rational approach of the French, which was also quite political around the early 1970s, with the idea of landscape and territoires?

Kathryn: I never got involved. I think I was so dead-set on trying to discovering what was possible to do in landscape, rather than worrying about territoires. I was more interested in form and how to make a form fit as if it emerged from a landscape and didn’t feel foreign. I felt a lot of that intellectual approach was artificially imposed and they didn’t feel like it was part of the earth, much like a lot of agriculture is.

That territoire thing of imposing something, making it part of a bigger thing is important, but there’s two ways to do that. One is the natural way and one is an artificial and man-made way. I’ve always been in between the two, because of where I was raised: between the natural and artificial. So I’ve always had those really hard lines, along with those really soft lines. Its sort of really part of me.

My parents were master gardeners, so it’s always been something I had to be part of at home.

Anton: It’s interesting that you live in Paris. You’re still there.

Kathryn: Well I’m there but I’m also on an island in Seattle now, in the country. I can’t see anybody. I’ve had my own gardens now for 17 years, which is fantastic. I’ve learned so much having my own garden.

My parents were master gardeners, so it’s always been something I had to be part of at home. I had to cut the junipers and weed them, and had to trim the lilacs or whatever my dad or my mother wanted did during the week.

Anton: Do you think that’s influenced the very tactile way you used to work, for instance with clay?

Kathryn: No, because I started art when I was like 13 and I started in clay. I think that my brain just doesn’t work on two dimensions. My brain really works only in three dimensions. So I have a lot of problems understanding a two dimensional thing. That’s why I always work in section. I can’t just work in plan.

Anton: Can you say something of why you use clay and its casting? The negative and the moulds are fascinating.

Kathryn: Yes, but the moulds are just a method for me. I think the clay is perfect for landscape because it reacts like soil. It’s a pourable material, like soil. When wet, like mud, it’s pourable. I think that working in a material that is close to what you’re going to work in, in reality really helps. So often if I’m working in clay and I know I want a wall, I’ll talk a piece of metal or a piece of wood, something that’s rigid that’s not mouldable.

An engineer friend of mine taught me, and said, “you have to work in a material similar to the material you’re going to build in, because they react the same. If you don’t, you end up building a model that can’t be built in that other material”. It took me a while to understand intellectually what that really meant.

I think a lot of people build landscapes out of cardboard and things that actually don’t have anything to do with the landscape themselves, and I think that’s part of the problem, why they don’t actually teach you a whole lot about what’s actually going to happen. It’s probably a more abstract form of relationships and space, but I think it loses that real quality of vérité, you know, that clay will give you in a landscape.

This podcast series is made possible through the RMIT University School of Architecture and Design SRC fund. Listen to the full interview at Landscape Conversations, via iTunes or its website.
For more information email Anton James