A new book by landscape architect Julia Watson reveals lessons from indigenous building practices that might help our cities weather the worst of climate change.

Julia Watson is a landscape architect with a career history that reads like it belongs to an especially adventurous anthropologist. An enduring fascination with sacred and cultural landscapes has taken her everywhere from the jungles of Borneo, to Mount Kailash in Tibet, to Bali’s volcanic Mount Agung, where she has helped to develop a heritage protection plan to preserve the complex interrelationships between the island’s water temples and its urban design and agriculture.

This passion for cultural landscapes, and the knowledge systems such landscapes represent, infuses a new book Watson has just released through Taschen. Lo-TEK: Design by Radical Indigenism is a book of the sort likely familiar to anyone with an interest in design publishing: a compendium of beautifully photographed constructions, accompanied by drawings and descriptions of their design innovations. The key differences are, the constructions aren’t sparkling new, but in many cases hundreds or even thousands of years old, and they’re not the work of ‘starchitects’, but of indigenous communities.

To that, you could add that these works are also designed to perform multiple functions, sustainably, which is sadly something we can still rarely say of contemporary construction in the built environment. All of the case studies are characterised by a close and highly legible relationship between built form, cultural practice and necessity. They also, overwhelmingly, rely on what we might call ‘soft’ systems for their efficacy: plants, soil, water and dynamic, so-called ‘natural’ phenomena. A view over the sacred Mahagiri rice terraces in Bali, a small portion of the one- thousand-year-old agrarian system known as the subak. Photo: © David Lazar Built by the Tofinu, the city of Ganvie floats on Lake Nokoué surrounded by a radiating reef system of 12,000 acadja fish pens. Photo: © Iwan Baan 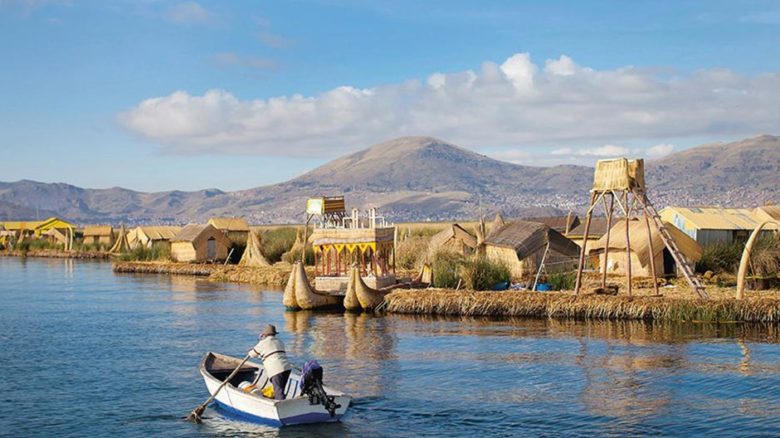 A floating island system on Lake Titicaca in Peru inhabited by the Uros, who build their entire civilization from the locally grown totora reed. Photo: © Enrique Castro-Mendivi

Watson is based in the US, where she teaches at the Harvard Graduate School of Design and at Columbia University’s Graduate School of Architecture, Planning and Preservation, but trained as an architect and planner at the University of Queensland in the mid-90s. Here, she was taught by Professor Paul Memmott on Aboriginal environments. As she describes it, Memmott’s class lifted a veil for her and she suddenly began to see the landscape around her properly for the first time. That led her in turn to Phin Murphy and Jim Sinatra’s renowned book Listen to the People, Listen to the Land, writings by Catherin Bull and then on to work with landscape architect John Mongard [full disclosure: Mongard is a member of Foreground’s editorial advisory panel].

In the following interview, we talk with Watson about Lo-TEK and her hopes for how it might help build an understanding of indigenous philosophy and vernacular architecture, towards the development of sustainable, climate resilient infrastructures for our cities.

Foreground: I was interested to see you refer to the technologies in the book as infrastructure. Why ‘infrastructure’?

Julia Watson: We think of infrastructure as single purpose, hard. What I’m presenting is what we call ‘subsystems’. They may not be engineered by the hand of an engineer, but they’re still infrastructural and they’re working at the scale of infrastructure. I fundamentally believe that the greatest impact that we’ll have on climate change will be at the infrastructure level.

Foreground: So when you say infrastructure, you mean both hard and soft infrastructure – built elements within the environment and also soft systems, so cultural elements as well?

Julia Watson: No, soft like green. Hard is like road transportation corridors, piped infrastructure. The most obvious comparison is what we might use in relation to sea level rise and storm surges: you can have really hard infrastructure like a levee, or you can have a polder dike system, which is reclaimed land that allows flooding and submersion. But it’s soil and plants rather than concrete and rocks.

Foreground: So the human systems would be another layer on top of the hard and soft infrastructure?

Julia Watson: Yes. If you look at them in the sense of human ecology, they’re called socio ecological systems. I would argue in these specific categories you can’t remove one from the other. The ecosystem is built by the community. That ecosystem wouldn’t exist without the community and the community wouldn’t exist without the ecosystem. So they’re completely intertwined and symbiotic in their relationship in the landscape. With hard infrastructures – bridges and seawalls, for example – they don’t work in that way at all, and often they fail because of that. You’ll get hard infrastructure projects put in place where once they fail they’re rendered useless because they can’t be repaired as they don’t use local resources. They’re not soft, so they don’t adjust with different conditions. And the human cultural element has never been considered in those sort of single use, somewhat colonial infrastructures. Why are they being promoted as a universal fix when all over the world there are these soft, natural technologies that we’re not even recognizing as potential ways to deal with climate change in situ? With all the cultural knowledge of local environmental conditions and all the materials and skills already there?

Foreground: What this book seems to document primarily is the built by-product of agricultural systems. Is that a fair characterization?

Julia Watson: A lot of them are dealing with agricultural systems, yes, but I think that they’re dealing with a lot more as well. That’s what you get when you have an infrastructure that has multiple co-benefits. One of the benefits might be food, the other might be clean water, others might be carbon sequestration, canopy cover, soil rehabilitation, aquifer recharge. We just don’t design things like that at this point in time. The categorization that they’re just agrarian landscapes has been a limitation in a way, the primary reason why they haven’t been explored as a technology. 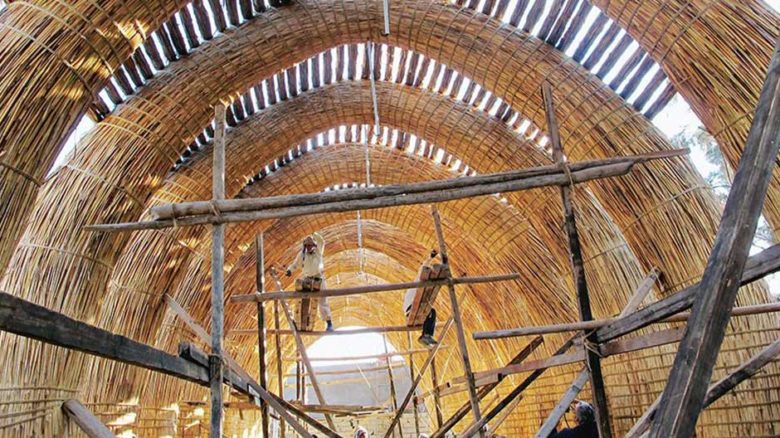 In the Southern Wetlands of Iraq, an entire Ma’dan house known as a mudhif, which is built entirely of qasab reed without using mortar or nails, can be taken down and re-erected in a day. Photo: © Jassim Alasadi A line of evenly spaced spoil craters in Iraq is the only evidence of a subterranean man-made water stream called a qanat, first constructed by the Persians during the early years of the first millennium BCE. Photo: © Alireza Teimoury

Foreground: A lot of the case studies you show in the book have evolved and been refined over many generations, in relation to what are relatively stable systems. Do you think they still offer valuable lessons in an unstable world characterized by increasing climate change?

Julia Watson: I would actually say the opposite to that. I don’t think these systems have evolved in stable environments. From what I have seen, these systems have evolved because of climate extremes. The Waru Waru in Peru, which is the first chapter,  is farming infrastructure at high altitudes. That was developed because of extremes of drought, frost and flooding. Most of these systems are actually dealing with climatic extremes – they’re designed in a way that they can adapt very quickly, because over time they’ve been impacted by various extremes.

A lot of these communities, they’re not living in the easiest of environments. To create rice terraces, you’re doing that because there’s not enough arable land that’s flat. You’re trying to design agrarian systems that are usually on flat landscapes, but because of topographical conditions, you’ve got to go up. That’s an extreme condition for a grain system.

The Uros [in Peru] is another example. They moved into their lacustrine environment a couple of hundred years ago because they were pushed off territory. So they transitioned into a water landscape. The same happened with the Tofinu tribe in Benin, where they fled another tribe into Lake Nokoue to make the city of Ganvie. They’re dealing with the extreme environments and extreme conditions that we’re dealing with at this point in time, so I see that there are very strong parallels.

Another thing that’s really interesting is you see this simultaneous innovation. So communities who are living in environments that are flooded constantly, they kind of come up with the same technology, even though they’re not speaking to one another and that knowledge is not migrating,

“As cities grow, how do they grow in a way that their second or third growth ring corridors are growing with nature-based technologies?” – Julia Watson @julia_watson_

Foreground: You describe the technology in the book as “Lo-TEK” [Local Traditional Ecological Knowledge], as a hybrising of the spirit of humanism with indigenism. I’m wondering in this sense how you conceived of the book as a designed artefact. A lot of its graphic conventions arguably operate within Enlightenment traditions – we’ve got orthographic and axonometric perspectives, maps… Did you wrestle with how you represent these non-‘expert’ infrastructures?

Julia Watson: One of the primary things that I wanted to know for myself, as a person who taught contemporary technology and was looking into these indigenous technologies, was how I could reconstruct these systems. How do I know the depth of micro topography? How would I know the depth of the first treatment pond for a wastewater system? So within the idea of built ecology or a built environment, as a landscape architect I want to know how I actually design this. The representation does stem from that [Enlightenment] period, but that’s part of how architects work. The designers of the book are Swiss and their primary consideration was how to take a subject that people think of as primitive and of the past, so that we understand it as contemporary and of the future. How do we elevate it from romanticism and historicism, the typical way indigenous groups are represented? Because I see all of these things as really contemporary and technologically advanced.

Foreground: What would you like to see result from the publication of the book? What are your hopes for it?

Julia Watson: I would like to see that there’s mass recognition of the ways that indigenous people have re-designed and re-crafted and adapted their landscapes. I think there’s a lot of potential for us to move away from industrial infrastructure and urbanism. As cities grow, how do they grow in a way that their second or third growth ring corridors are growing with nature-based technologies? That’s why I have talked about Lo-TEK as a movement, because it is really a huge mental shift for designers, planners, urbanists and engineers to reconsider what is available to us and what we have overlooked.

What I think would be amazing was if in 50 years, someone picks up the book and wonders: “How the hell did they really not think of this as technology back then?”