Cultural movement: what can dance tell us about place?

Choreographer and dancer Amrita Hepi and landscape architect Claire Winsor explore what dance and movement can teach us about place, memory and communication in a new commission from the Kevin Taylor Legacy grant.

We all move across the land. We negotiate landscape, rising and falling with the swells of hills and vales, as well as the small abrupt changes of steps and ramps, little bumps and depressions in our path. We can enjoy the shift of bodily progress that comes with wearing new shoes or a big coat, conscious of moving differently and in a new relationship with our surrounds. We develop intimate and habitual relationships with place and learn to adjust to them with injury and infirmity, a wheelchair or a pram.

With such a common human sense of lived space, it is odd that we don’t think of dance as an extension of this everyday capacity.

The Kevin Taylor (KT) Legacy allows for funding of an annual creative-in-residence with landscape architecture practice Taylor Cullity Lethlean (TCL). The grant was established in memory of founding director Kevin Taylor, drawing on his curiosity and commitment to challenge “how we interact with, interpret and represent the Australian landscape”. The latest offering is a tightly edited 5:45 minute video of choreographer and dancer Amrita Hepi made in collaboration with landscape architect Claire Winsor. It is the outcome of a process of workshops and conversations around the theme ‘movement of place’, with videography by Winsor and Adelaide videographer Peter Drew.

“Often discussions around dancing talk about how ‘expressive’ it is. While dance is expressive, it is sometimes functional or funny or even awkward” – Amrita Hepi @amrita_hepi

Hepi is a Bundjulung and Ngapuhi performer and choreographer interested in the relationship between dance and social mobility. As she explains, this grows from a concern for “how people of colour through history have used dance as a way to survive.” At the time, Winsor was an associate landscape architect at Oculus Studios Melbourne. During 2019, she co-founded her company Spinney to pursue her own collaborative and creative projects. Winsor had been considering how and if a landscape architect might be the ‘creative’ in residence. With a love of dance and intrigued by “the temporal experience of space through design,” Winsor was keen to work on a project with Hepi. She felt that dance and movement had much to offer in enabling exploration and sharing of important, embedded feelings about place in direct and intuitive ways.

“Often discussions around dancing talk about how ‘expressive’ it is,” Hepi notes. “While dance is expressive, it is sometimes functional or funny or even awkward.” Hepi challenges the elitism that would make dance and movement the proper activity of the talented or credentialed. She is also wary of claims to authenticity or ‘cultural dance’. Dance – or any art – is not something reserved for those who are somehow specially entitled to perform or appreciate it. 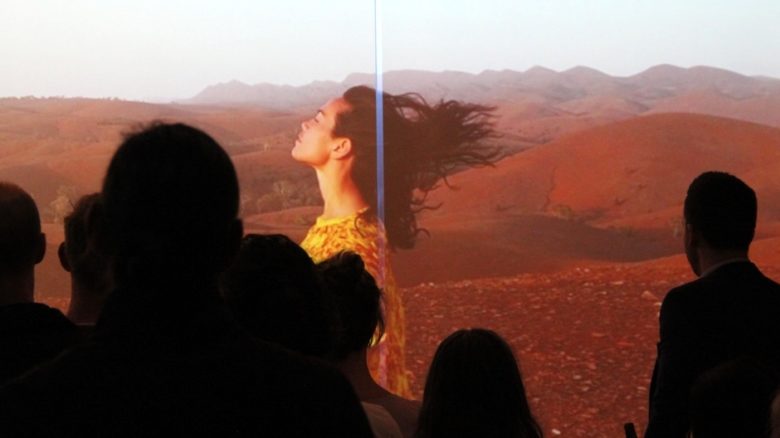 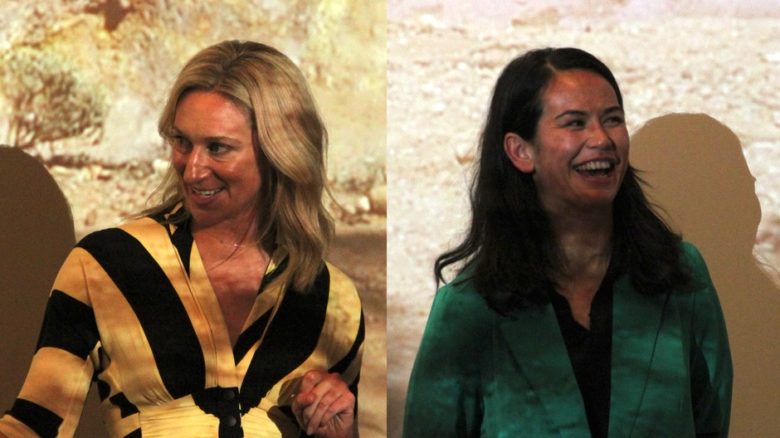 Claire Winsor and Amrita Hepi at a screening of video installation Movement of Place, produced as part of the Kevin Taylor Legacy. Image supplied

This thinking plays into the work of Hepi. In her collaboration with Winsor she had adapted a workshop model of face-to-face, one-on-one engagement to encourage participants to talk – and move – in response to questions about place. Winsor and Hepi’s submission outlined a series of workshops as the key substance of the project, called “Harvesting Conversations”.

Fourteen TCL staff and friends participated in one-on-one conversations. Applicants for Legacy funding are asked to consider how they will involve the practice. Movement of Place has perhaps had the strongest interest in and commitment to developing the project with the wider input of staff. The structure drew on a successful approach Hepi had developed with an ongoing project, “A Call to Dance”. It involved conversations with a wide range of people asking questions about place and the idea of Country. Interestingly, she had found that oblique questions yielded more ready responses than asking directly what people thought about of a particular place. Asked instead to compare somewhere with another place or imagine being ‘elsewhere’ in order to describe ‘here’ was much more fruitful.

It was also helpful not to think of movement as dance, but just as a natural way to respond to an environment. “I asked the TCL interviewees to think about balance or falling” says Hepi “and then they could just act out small gestures or move their body or relate to the furniture in a small way that opened them to moving in order to explain something.” The choreography of the video incorporates the gestures of interview participants.

The dancing offers a varied show of beauty, less studied grace than a matter-of-fact mix of happiness, curiosity, caution and eagerness, all overlaid with an alert sensuality

The video splices Hepi dancing in a series of locations that were identified in the participatory workshops. Originally Winsor and Hepi had thought the film would be based in Melbourne but it was Adelaide and remote South Australia which yielded the strongest memories from participants. Ultimately the sites chosen were Adelaide Botanic Gardens, including the Wetland and Bicentennial Conservatory, nearby Botanic Park, The Royalty Theatre, Bumbunga Lake and Ikara Flinders Ranges National Park. 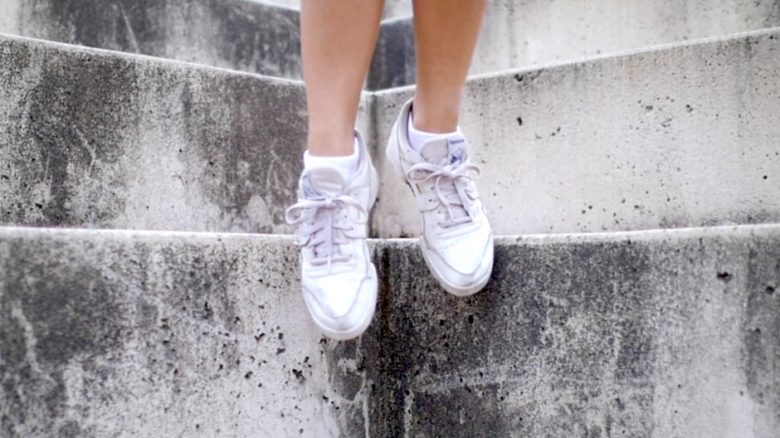 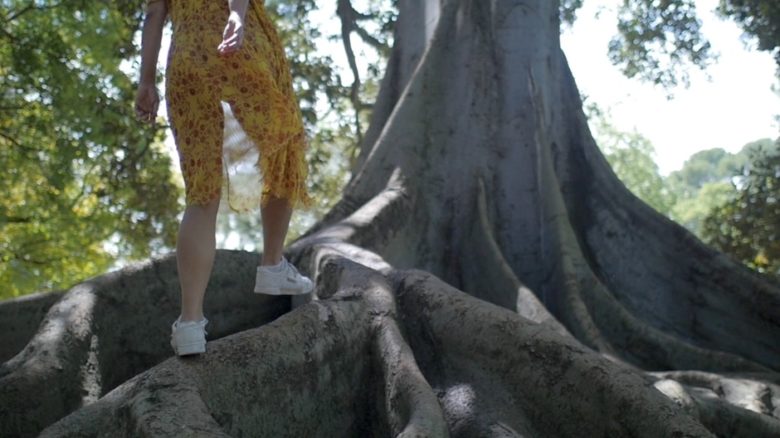 While the background landscape and context cuts regularly between outback and urban park, interior and exterior, the continuity of Hepi herself and her dress and shoes stitch together the contrasting textures of different landscapes. At first they looked at several costumes and considered using many throughout filming. Ultimately, the dress was very comfortable “and – unexpectedly – very tough!” says Winsor. Hepi finds a poetic appropriateness in the choice too. “I bought it in Palm Springs, California, in another desert on the other side of the world, and here I am performing with it in an Australian desert.” It is a rich ochre with small red flowers on winding stems: an arid-ecology botanical print. She always wears her hair out if possible “and while I would have preferred to be barefoot” adds Hepi “it was not possible out in the hot and rocky Ranges.”

Hepi is the constant and almost only figure. A kangaroo bounds out of frame in the Ranges and some blurred human figures shadow the background of a few shots in the Botanic Gardens (it was filmed on a busy public holiday). One arresting sequence shows Hepi prancing or proceeding like an animal across rocky ground with an easy if curious vitality. There are moments of lightheartedness or even comedy such as when her body shuffles sideways, both coy and cheeky. We sometimes see a smile or the tail of unheard laughter. The dancing offers a varied show of beauty, less studied grace than a matter-of-fact mix of happiness, curiosity, caution and eagerness, all overlaid with an alert sensuality.

Discussions of landscape are frequently composed around judgements that pit outback and city, nature and culture against each other, validating the charms or authenticity of one at the expense of the other

The energy of the dancer seems drawn from the landscape rather than externalised from within. Hepi stretches, bends and strokes, reaching into the surrounds and feeling her way into the materials and the shapes of the spaces around her. This feels different to other dancing that comes across as the dancer’s expressed emotions and reactions. It may help to explain the title of the project too: the dance and dancer are a proxy or rod for the Movement of Place, rather than telling a tale of movement about place or movement inspired by place.

Discussions of landscape are frequently composed around judgements that pit outback and city, nature and culture against each other, validating the charms or authenticity of one at the expense of the other. In the video, the variety of sites are not juxtaposed in any sort of competition. They are all used to support the body’s exploratory movements without passing judgement on the beauty or importance of one place over another.

Dancing towards a deeper understanding of place

The experience of landscape is inarticulate. It is powerful, direct and physically multi-sensorial. It seems obvious that dance and bodily motion could both capture and communicate something of our particular and personal knowledge of place. But how? 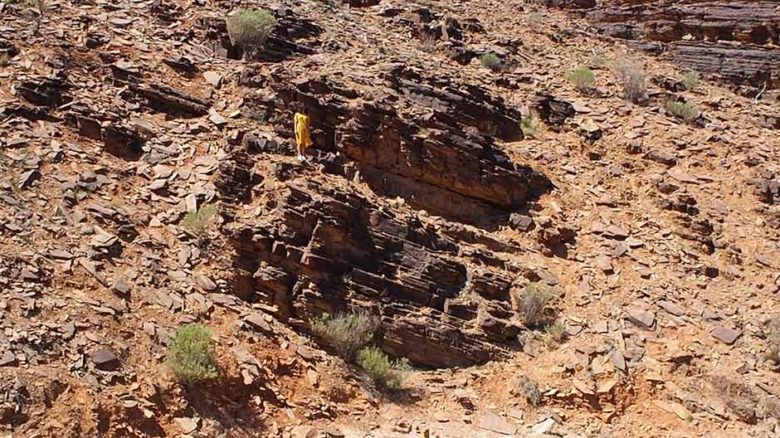 Quoting an observation of Kevin Taylor, Winsor and Hepi noted in their submission: “In Australia we are progressively waking up to our not knowing that we don’t know. We are realising that we do not know this place.” Together with TCL, Hepi and Winsor proposed to “collaborate and explore how we may better understand the Australian landscape through cultural movement. Through a creative and collaborative process we explore how we can use movement to define space, explore culture and better interact with, interpret and represent place.”

The usefulness and value of the outcomes of the KT Legacy program are not instrumentalist. They are not demonstrably about improving the practice or providing new tools for better community consultation or more authentic engagement, although they can indeed do this. The exploratory nature of the risks each work has taken surely begin with the aim of sharing wonder and joy. And their influence begins with this very hopefulness; a reconsideration of how we access and communicate appreciative feeling. Taylor’s writing and poetry provide examples of such efforts.

In introducing the installation in Melbourne Lucas Dean, an Associate at TCL and KT Grant manager read a short poem by Taylor that seems an illustration of Winsor and Hepi’s work:

Flying
Arms outstretched, lifting off the ground
Flying with ease high above the ground
Others flying too.
Flying smoothly, gliding
Looking down at the earth below.
It’s so easy.