As COVID-19 bites, this ‘freedom machine’ is enjoying a resurgence

With cities escalating their COVID-19 responses and closing down parks, gyms and recreation centres, one form of mobility is coming into its own: cycling.

Many are seeking silver linings in the current health crisis. There are heartening reports of reduced pollution and improved environmental conditions (although some are sadly exaggerated). Others have reflected that past pandemics led to social reforms that improved living and working conditions for all. It is even suggested that the failings of capitalism are now starkly revealed, with helpful lessons for previously unimaginable positive change. We are learning not to take our public institutions for granted, particularly healthcare. And we have even learnt from toilet paper, assessing our fears and finding new capacity for compassion and sacrifice.

But there is something that mixes a little of each of these. What can help improve the global environment, personal health, economic resilience and social equity? Cycling.

Whether recreational or commuter, cycling combines healthy exercise with zero emissions – as it always has – along with now offering welcome release from inactivity and enabling car-free travel, away from the closely-shared spaces of public transport. Coronavirus is causing a boom in city cycling.

Australia’s Bicycle Network believes that “now is not the time to stop pedalling and the perfect time to start if you’ve been curious”. Bicycling Australia suggests that cycling “could be a perfect panacea during this global pandemic” with an eight-point list of benefits: “Social distancing – ride your bike…Can’t go to the gym or spin class – ride your bike,” the meme-able chant goes on.

Bike groups have hurried to clarify what safe cycling might mean for members. While the group rides and events that are a familiar feature of many local clubs are sadly no longer to be held, riding alone is encouraged, particularly solo in non-crowded areas. (By the way, serious cyclists can also get handy help on What You Need to Know About Spit and Snot During the Coronavirus Outbreak.)

In the UK, an open letter from public health & transport researchers has called on government to support safe walking & cycling, and cycling is included in both commuting and the “one form of exercise a day” – the only form of non-essential activity that UK citizens are permitted to do outside the house. With empty New York streets, some residents are calling to close the streets to cars. Image: Eden, Janin and Jim.

Australian authorities silent on cycling during the pandemic

While cities around the world seek to encourage cycling during this time, Australian authorities have made little comment. Indeed, it had appeared earlier this year that an appetite for cycling may have peaked in Australian cities.

In February 2020, the council of Greater Geelong voted to remove an award-winning green spine project in Malop Street, originally designed to run through the entire city and provide a safer route for cyclists. However, community complaints of traffic congestion compelled the council to reconsider the work. AILA president, Shaun Walsh criticised the decision as “a retrograde step and… an appalling waste of public funds,” adding that it would have a negative impact on Geelong’s commitment to addressing climate change. The Victorian state government took control of the road in March to prevent the removal, declaring it a Designated Road Project under Victoria’s Road Management Act.

While cities around the world seek to encourage cycling during this time, Australian authorities have made little comment.

Adelaide’s Frome Road bikeway faced almost identical difficulties. The original stage and 2014 design at the southern end of the street separated bikes from traffic in a new approach to cycling infrastructure for the city, but modifications and extensions in 2017-2018 reignited calls to remove the unfamiliar infrastructure, as well as counter-calls to realise the full vision of the bikeway. In 2019, landscape architect Daniel Bennett, then head of design for the City of Adelaide, persuaded council that ‘it’s not just about bikes’.

In developing an approach to the whole streetscape, the Adelaide Design Manual presented an integrated and consistent approach to road treatments. The latest episode of the Adelaide (un)Planned podcast features Bennett chatting with behaviour change psychologist, Walking SA exec, and elected member Helen Donovan, about how changing hearts and minds is harder than changing infrastructure. A city bikeways team at council is now delivering extended routes with the help of state government funding.

Yet also in February 2020, while Geelong sought to remove cycling infrastructure, Melbourne announced a proposal to create hundreds of kilometres of ‘cycling superhighways’ from booming suburbs to the city centre. The idea was backed by advisory body Infrastructure Australia. In assessing the proposal, they noted Melbourne’s the bicycle network does not currently meet community needs, safety or expectations. 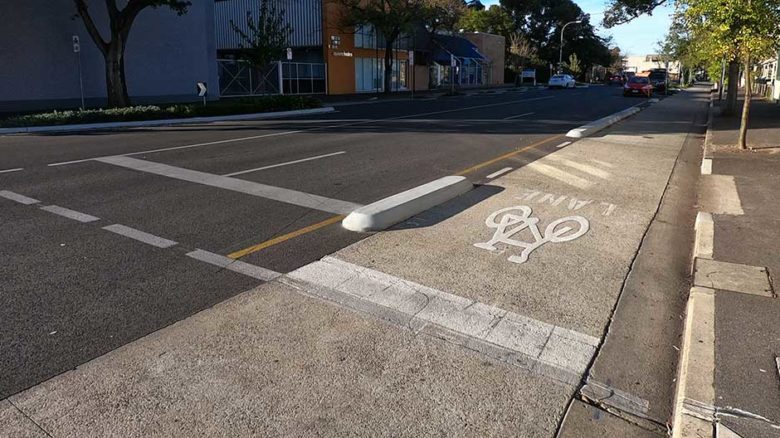 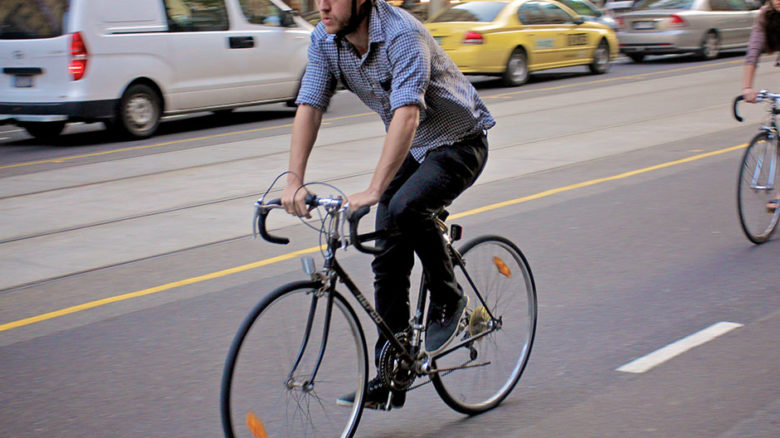 Many bike lanes in Melbourne are long over due for an upgrade. Image: Savio Sebastian

Not feeling safe as a cyclist among vehicular traffic is a major disincentive to ride. Australia and the United States share similar attitudes. In early March this year, Mayor de Blasio seemed to suggest that he was afraid to cycle in New York, with media reports adding that of the 220 people killed on New York City’s streets in 2019, 29 were cyclists.

In their introduction to Cycling Futures in 2015, editors Jennifer Bonham and Marilyn Johnson noted that several Australian states were implementing or trialling new road rules aimed at improving cycling safety. But the 2016 census then seemed to show an overall fall in cycling activity. Despite hard-won gains in physical infrastructure provision, riding continues to be seen as dangerous with car drivers careless of, if not actively hostile toward, cyclists. In recently completed research Bonham examined how Australian learner-drivers are taught that pedestrians and cyclists are ‘hazards’. While other cars and trucks are also hazards, the literature names the inanimate vehicle rather than the person in charge. Bonham’s research work is developing an education module for learner drivers that neutralises the language around non-automotive streetscape users.

If the humble bicycle is the new freedom machine, perhaps we will see not just more equitable active transport, but an urbanism that is more connected and kinder to difference and vulnerability, as well as being healthier and happier.

Access to safe cycling via dedicated bike lanes and off-road trails is a social justice issue. This was something reviewed in Melbourne in 2017 as part of building exactly the resilience cities need now. The first Chief Resilience Officer Toby Kent, highlighted problems of an aging, isolating and unequal urbanism when Melbourne was one of 100 cities in the Resilient Cities network funded by the Rockefeller Foundation.

It seems certain that after the coronavirus, Australia and the world can never be the same again. Many short-term emergency measures will become a fixture of life. The choices made in a time of crisis amount to a vision of the future. So what future do we want? If the varied and variously humble bicycle is the new freedom machine (a term snaffled from the failed promises of the automobile by a Melbourne bike shop) perhaps we will see not just more equitable active transport, but an urbanism that is more connected and kinder to difference and vulnerability, as well as being healthier and happier.

Dr Jo Russell-Clarke is a registered landscape architect and Fellow of the AILA. She is editor-at-large of online journal Foreground and a senior lecturer at the University of Adelaide.