Australia’s sports fields are battling climatic and population pressures. Could synthetic sports grounds be an answer to the damage wrought by hotter temperatures and intensifying usage?

Australia is getting hotter, a fact that even Sydney’s typically skeptical Daily Telegraph acknowledges “there’s no denying”. This poses a conundrum for the sports that take centre-stage in the country’s growing cities. Rugby, Australian Rules Football (AFL), soccer and other pitch-based, space-hungry sports are all set to suffer from the twin pressures of an unpredictable climate and a burgeoning population – if they aren’t suffering already. AFL grounds, for one, consume vast amounts of open space and, when naturally turfed, as is typical, are water-dependent. Like so many things in our warming world, to survive, sports grounds will need to adapt.

Currently, codes like the AFL are suffering from a space crunch. As Australia grows, so too will the demand for more community footy games, more often. But the problem is, the natural turf used on most grounds presents a practical disadvantage, as it limits hours of gameplay due to wear. This is where synthetic turf could come in, says Federation University’s Head of School of Health Sciences and Psychology, Dr Dara Twomey.

“You can get double to triple the playing hours on a synthetic ground over a natural one, depending on how it’s maintained, what level of play is on it, and how intensive the play is,” Twomey says.

Like so many things in our warming world, to survive, sports grounds will need to adapt

At this point, the demand for AFL grounds looks set to continue to increase dramatically, thanks especially to the launch of the AFL Women’s League in 2016. In Victoria, women’s teams are the fastest-growing AFL forms, having grown 138 percent since 2008. This demographic boom is already forcing the way a Club’s fields and facilities are designed and operated. One example is the South Morang Football Club in Victoria’s City of Whittlesea. This club has over 20 teams, made up of both male and female players at a junior and senior level. Previously, the club maintained two naturally turfed grounds. In 2016, the local council replaced one with a synthetic alternative.

“When people ask about a ‘modern footy club’, I think of South Morang,” says AFL Victoria’s facilities and partnerships manager, Shayne Ward. “While they’ve put in the synthetic ground, they’ve also upgraded their pavilion, made it female-friendly, and in the right circumstances it could recycle water for use in the rest of the grounds.”

One of the other oft-touted benefits of synthetic grounds is their potential to harvest rainwater, because, as Ward says, they function “as one massive roof”. However, the set-up costs can prove prohibitive for local clubs and councils. When contacted for comment, a City of Whittlesea spokesperson said that while they “would’ve loved to” implement a rainwater harvesting system, they disclosed that it would have raised the budget by “hundreds of thousands”.

There are some Australian examples that show a way forward, however. The University of Queensland’s award-winning synthetic sports grounds are one example. Placed on top of a 500-spot carpark, these artificial soccer and hockey grounds capture rainwater in a 300,000-litre tank. But, for the most part, this water is spent on keeping the grounds cool.

“One of the main concerns with synthetic turf is that they require a lot of water to be applied,” says Graeme Harvison, landscape architect at Tract, and team member of the UQ grounds development. “Of course, that means you’ve got to consider how you’re capturing, recycling, and disposing of water, which UQ is doing”. 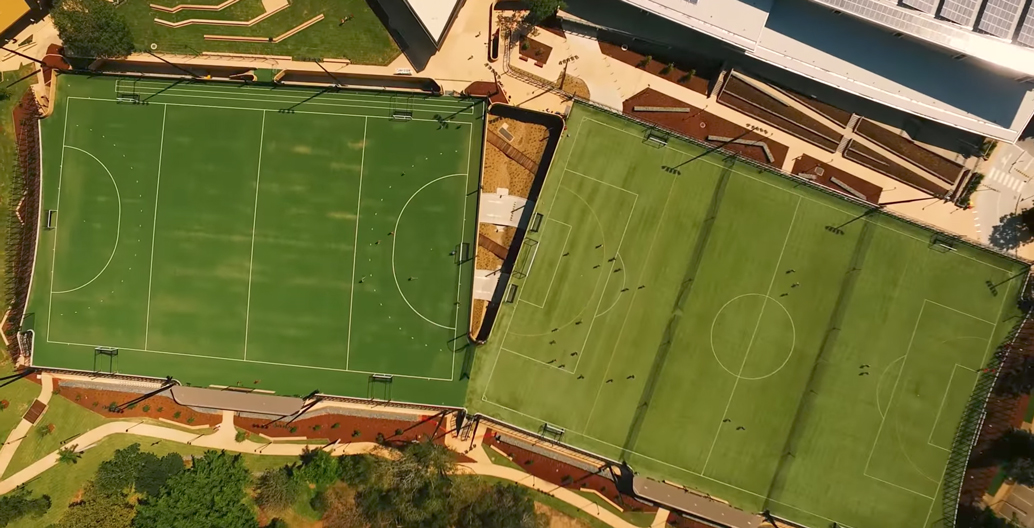 UQ's hockey and soccer pitches from above. Image: UQ. The components of an artificial turf vary, but most are have a rubber base. Image: Rune Mathisen 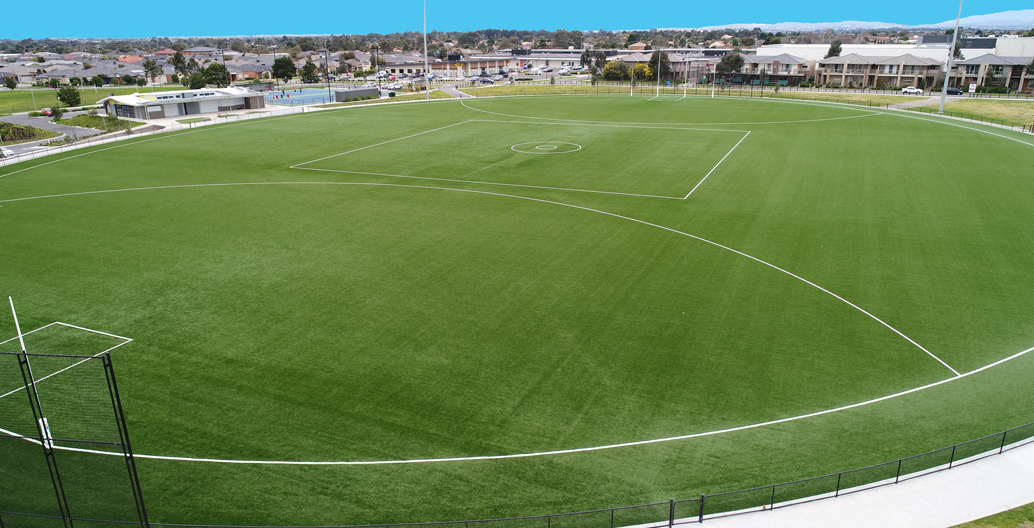 A 2002 US study recorded synthetic turf temperatures running as high as 93°C. In fact, synthetic turf is generally 20°C to 30°C hotter than natural grass, which, thanks mostly to transpiration, rarely gets warmer than 38°C. While the same study found watering helped to cool synthetic grounds, they shot back to the median temperature within 20 minutes.

This could lead to an ironic outcome, as the water harvested by a ground is used to keep the same ground playable. Artificial grounds, then, can be just as thirsty as their natural cousins, albeit there are ways to mitigate the heat effect without watering.

“If it gets very hot, you could introduce more hydration breaks, or if it’s a very sunny day, you could delay the match and play a bit later, and cloud cover reduces surface heat greatly,” says Twomey.

This isn’t the most practical way to solve AFL’s demographic pressures, however. Delaying gameplay defeats the purpose of installing artificial turf, seeing as you want to be getting more gameplay (and junior teams can’t be expected to play into the night). Shade-sails, meanwhile, are only useful for clubs that can afford to purchase and install them. Dr Twomey was quick to remind us that this could change, though.

“Manufacturers are always finding new ways to mitigate this,” she says. “It’s all about finding what’s making the ground retain heat, which might be its rubber crumb infill providing less space for the heat to dissipate.”

The rubber crumb Twomey speaks of is a current industry-wide practice designed to cushion players involved in contact-heavy sports, largely taken from car tyres. Natural turf is biodegradable, but you can’t say the same of artificial grounds and most end up in landfill. A 2011 Western Australian Department of Sport and Culture report stated that the in the US and UK, some grounds have been used as ‘clean fuel’ for cement plants – even while in states like Victoria, burning old tyres is an offence. The same report cited a 2007 Canadian study that 1861 trees would need to be planted to offset the carbon emissions from a synthetic turf lasting 10 years. Given that the adoption of artificial turf in Australia is still relatively new, the infrastructure required to dispose of them sustainably will be sparse at best.

While synthetic turf allows more teams to play on it, more often, the jury’s still out on whether that can happen in a warm country like Australia. And, of course, its environmental impacts are yet to be determined. A synthetic solution isn’t a silver-bullet, so much as a stopgap.  The form that Australia’s sportsgrounds of the future will need to take in order to survive in a warming and increasingly crowded world seemingly remains an adaptation-in-progress.