Dead trees can be very good indeed at providing support for native wildlife. In Australia, a country where animal species are under growing pressure from the extreme effects of climate change, preserving this habitat is crucial to species survival and ecological resilience.

In 2018 Australia was the only nation in the developed world to make the World Wildlife Fund’s (WWF) global list of deforestation hotspots. The Guardian reported in March of that year that “Australia is in the midst of a full-blown land-clearing crisis,” suggesting that projections show “in the two decades to 2030, three million hectares of untouched forest will have been bulldozed in eastern Australia.” But more than just living trees are at stake. Old-growth forests provide habitat for animals that cannot survive in other environments, in particular in ancient, dead and dying hollow-bearing trees. Now bushfires have ravaged millions of hectares of forest and habitat, including tens of thousands of hectares set aside by the Victorian government to protect the greater glider and other threatened species from logging.

The existence of powerful owls in Moyne Shire in Victoria is attributed to the retention of some large, damaged trees after the Ash Wednesday fires in 1983. Many trees were lost due to clearing on private land and roadsides after the fire, much of which, it is suggested “occurred as an overreaction to future fire threats”. Caution is being urged now to calls for increased hazard reduction and vegetation clearing, with experts advising that fuel loads are not as relevant as weather conditions and drought – that is, climate change – in driving wildfires. It becomes even more important to retain remnant natural environment, including even damaged and dead old-growth trees, when considering the multiple and growing threats to native fauna from climate change.

[D]espite Australian Federal and State legislation acknowledging the importance of hollow-bearing trees to biodiversity, there were insufficient mechanisms in place… to actually halt their removal

The significance of dead trees as habitat for native wildlife, not just in old growth forests but even in urban environments, is becoming widely recognised. The New South Wales government’s Scientific Committee, established by the Threatened Species Conservation Act, has made a Final Determination to list removal of dead wood and dead trees as a Key Threatening Process in the Act. The Committee outlines seven findings that explain the vital importance of dead wood and trees. Yet despite more recent recognition of the value of old-growth dying, damaged and dead trees, more attention needs to be given to developing not only legal protections, but a new mindset and a shift in aesthetic sensibilities too. This must come from authorities tasked to manage healthy landscapes but also from built environment professionals guiding a supportive public who will appreciate their enriched lived environments. A 2014 study of hollow-bearing trees (typically very old, dying or dead trees) as a habitat resource within a rapidly urbanising landscape found that despite Australian Federal and State legislation acknowledging the importance of hollow-bearing trees to biodiversity, there were insufficient mechanisms in place at all levels of government to actually halt their removal. The dead Eucalyptus in Flagstaff Gardens. Melbourne against a background of city buildings. Photo: Jo Russell-Clarke A fenced-off garden bed area beneath the dead tree is planted with indigenous species and trees grown from the trees seed. Photo: Jo Russell-Clarke 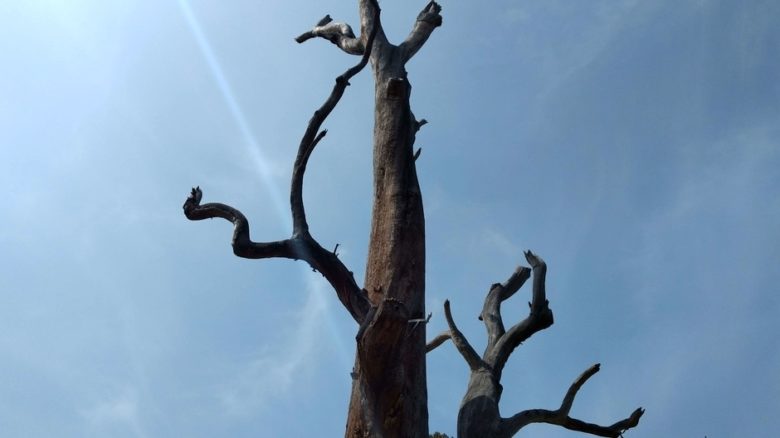 The retained tree in Flagstaff Gardens in Melbourne was pruned and manipulated to add habitat hollows for wildlife, attracting nesting birds and microbats. Photo: Jo Russell-Clarke

One of the more interesting users of large dead trees are owls. And a leading threat to Australia’s owls is the loss of habitat and old-growth, hollow-bearing trees that 10 of 11 owl species rely on for breeding. Nest boxes have not proven very successful. There is only one instance, for example, of powerful owls using artificial replicas of tree hollows. Powerful owls are Australia’s largest owl, occupying forests and woodlands throughout south-eastern Australia, including the suburbs of Sydney, Melbourne and Brisbane. They have been recorded in Fitzroy Gardens and Flagstaff Gardens in central Melbourne, as well as the suburban fringe.

Raylene Cooke from Deakin University leads a powerful owl research team. Last year the team were tracking owls in suburban Warrandyte on the outskirts of Melbourne. She notes that the owls need three things to live in an area: a tree to roost in, a tree to nest in, and enough food to eat. The parks and linear waterway and corridors of Melbourne’s urbanised areas can provide roost trees and food (particularly possums) but nesting trees with suitably large hollows are not easy to find.

Local governments, including Mossman in Sydney’s north are attempting to retain and monitor larger trees for habitat. In the late 1990s, Mossman local council began programs to improve the environment for local wildlife. One of these is creating hollows for habitat from potentially hazardous trees on public land. Arborist Kieren O’Neil creates hollows for up to 300 potential species to use, “accelerating the processes of nature” by chainsawing hollows into dead and damaged trees.

The City of Melbourne’s Draft Urban Ecology and Biodiversity Strategy is subtitled “The city as an ecosystem”. It includes a section on “Using dead trees” that encourages dead tree retention and also targeted creation of artificial hollows while recognising that the “approach will need to be managed to ensure health and safety for everyone”. The City has invited citizen scientists and “Citizen Foresters” to contribute to their database of nesting trees and hollows since 2016. A prominent example of actively managed habitat creation is the site preservation and modification of a large Eucalyptus cladocalyx, or Sugar Gum, that died in Flagstaff Gardens. Signs at the “hollows for habitat” tree acknowledge that hollows “provide critical resources for wildlife including insects, parrots, owls, kookaburras, microbats and possums.” Low garden bed fencing surrounds the dead tree. It protects the tree and the public and is planted with indigenous groundcovers, shrubs and young trees grown from seed of the parent gum above them.

A massive operation in Canberra in 2016 moved a 160-year-old, eight-tonne dead Eucalyptus melliodora, or Yellow Box, across the city to an “artificial forest” 30 kilometres away. The carefully pruned tree was installed at the soon-to-be-declared Molonglo River Reserve. The site, named Barrer Hill after late Canberra ecologist Peter Barrer, was once home to diverse species of raptors, reptiles, bats and birds, including wedge-tailed eagles and microbats. Five dead trees were moved to the site and were modified to create artificial hollows, perches, boxes and other habitat features to encourage wildlife to return. It was part of environmental offset agreements for a new Molonglo development nearby.

Critics were also concerned that a strategy to ‘relocate’ significant trees by [killing them for] habitat would normalise the destruction of even more valuable living tree habitat.

Late last year Mt Barker Council in the Adelaide Hills in South Australia relocated four large river red gums as part of the development of their Regional Sports Hub. The significant trees were recognised as valuable habitat. “Because they were full of natural habitat due to existing hollows, three of the trees have been relocated elsewhere on the site near two of the remaining trees,” explain Council on their website. The trees were removed without root systems and then their trunks reburied up to five meters deep to ensure stability. Additional artificial hollows will be added to the trees. The work garnered criticism on social media, especially following what some considered a misleading Facebook post speaking of tree ‘relocation’ without explaining that they would be killed by the process. Critics were also concerned that a strategy to ‘relocate’ significant trees by permitting them to be killed for dead tree hollow habitat would normalise the destruction of even more valuable living tree habitat.

Australia’s indigenous ecologies are currently under pressure to adapt to fast-changing environmental conditions. Communities too are becoming more vocal about human impacts on our landscapes and the flora and fauna we share with them. Along with better protection for living habitats, we should also recognise that dead trees in our landscapes have a lot of life in them.

Dr Jo Russell-Clarke is a registered landscape architect and Fellow of the AILA. She is editor-at-large of online journal Foreground and a senior lecturer at the University of Adelaide.