Through careful planning and judicious material selections, Elizabeth Quay by ARM Architecture and Taylor Cullity Lethlean reconnects Perth to the pleasures and opportunities of its river.

Perth has long wrestled with the question of how to connect with its waterfront.  According to University of Western Australia academic Julian Bolleter, who recently launched an exhibition and book on the subject, submissions for the site where the Swan River meets the CBD stretch back to 1833 when John Septimus Roe, the first Surveyor-General of Western Australia, proposed ‘a magnificent topographically interesting public park on the river’s edge.’ In 2007, the state government held a closed competition to design a masterplan for the site of Esplanade Park that could well have resulted in yet another fruitless scheme relegated to history. Instead, in January of this year the initial phase of what’s now known as Elizabeth Quay by Ashton Raggatt McDougall and Taylor Cullity Lethlean has opened, marking a critical development for the identity of the city and its connection to the water.

The masterplan’s pivotal elements are the pedestrian links between St Georges Terrace and the Swan River via two new promenades, essentially elongations of the existing Howard and Sherwood streets. These extend the city grid, while opening up unobstructed sightlines to the water and a new island and bridge, which the quay surrounds. The masterplan will gradually take the form of a new city block – the next phase of construction is a series of high-rise, mixed-use buildings. 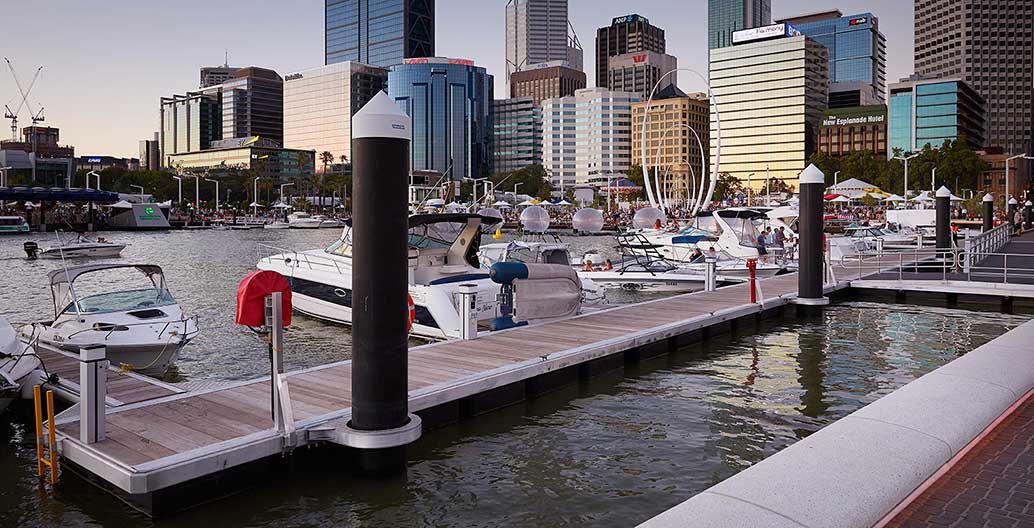 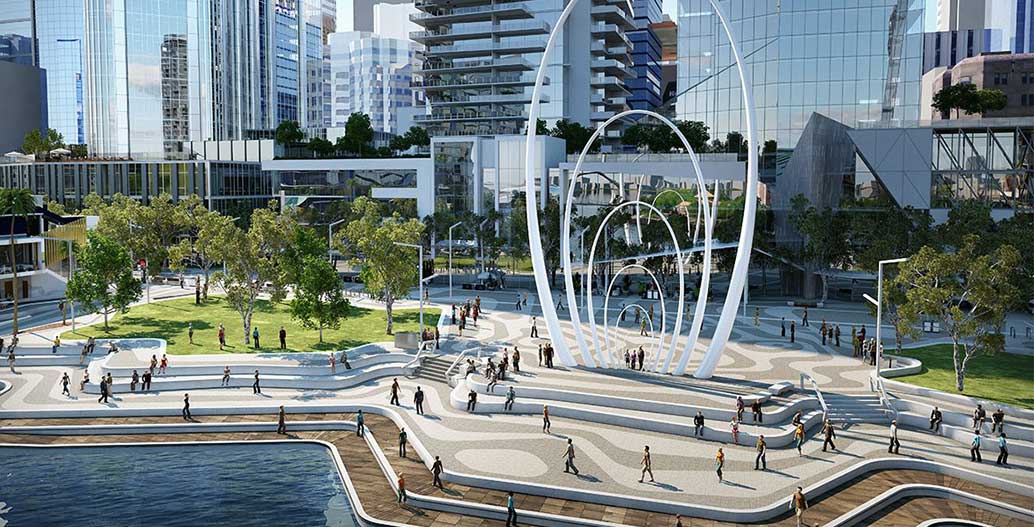 This new precinct acts as a central transport node. It contains a Transperth ferry terminal (which signals its location with an array of blue fins, its rooftop), the Elizabeth Quay train station, and cycle and vehicular thoroughfares that link to the existing north-south infrastructure. As a network, it creates numerous opportunities for people to pass through or gather at Elizabeth Quay and social activity here is bound to increase, as the realised design is persuasive as a public place.

the concept underpinning the design is the ‘abstraction of ripples in water’.

Kukame McKenzie, project architect at ARM Architecture, explains that the concept underpinning the design is the ‘abstraction of ripples in water.’ The designers expressed this idea in form of the hard and soft landscapes. Perhaps most dramatic are the sinuous line patterns of the stone paving setts (reminiscent of Roberto Burle Marx’s Copacabana), painstakingly hand-laid in alternating colours throughout the quay. Contractors were instructed to lay each sett with just enough variation in height to cast shadow and texture, but not too much to cause a trip hazard.

The hard landscape is a series of slim terraces, or ‘ribbons’ in McKenzie’s terms, which unfold upwards from the water in a subtle flow of level changes. It forms a distinct and tactile topography, urging visitors to traverse countless circuits around the island, bridge and promenades.

The designers have resolved each component of the terraces to convey a sense of movement and even weightlessness.

Materials are robust and applied raw, from a selection of granite, concrete, metal and timber – a palette designed to last the 100-year lifespan of the project. The designers have resolved each component of the terraces – pathways, plinth seating and barriers – to convey a sense of movement and even weightlessness in the materials (in juxtaposition to their essential heaviness). The corners of the granite seating are soft and rounded, and the stone is honed to highlight its swirling gold veins. Bases of the form-concrete barriers and the timber batten seats embedded within the barriers at intervals are detailed with negatives, so that these elements appear to hover.

At the edge of the deck, large-profile lengths of jarrah have been cut and laid in straight sections to articulate faceted contours, in a conceptual response to the river below. The rhythmic planks of the decking further emphasize these contours. At high tide, water laps at the edge of the timber deck, making it possible to reach out and skim your hand across the surface.

The architecture, in fact, encourages the visitor to get close to the water. The combined treatment of material and form creates a sequence of spaces of grand and intimate scales, offering many orientations and views across the river. At irregular intervals, a pedestrian exploring a circuit may unknowingly walk across a perforated metal segment of pathway, which cantilevers over the water. This ‘splash deck,’ as ARM Architecture calls it, does exactly as it says and wants to catch you out at high tide. Another playful water feature, located at the northwest corner, was conceived by the design team as a ‘skin of water that extends the river further inland towards the city.’ Ultimately, a sense of the Swan River is inextricable to the experience of Elizabeth Quay.

The island, imagined by the designers as an ‘annex of Kings Park,’ is planted abundantly with Western Australia’s most representative and striking species. The intention is to provide green contrast and relief to the adjacent hard landscaping. The separation of the island intensifies the subliminal experience of the texture, scent, colour and sounds of the native flora for the visitor.

The circulation sequence progresses from the island to the bridge (designed by Arup), as it draws the visitor out onto the Swan River via a broad, elevated deck, suspended between two, counter balanced arches. From the vantage of the bridge, the designers have choreographed a totally new, unexpected view back to Elizabeth Quay and the CBD immediately beyond. It’s a design move that perfectly encapsulates the masterplan’s ambition and the next chapter for Perth: the unity of river and city.

This feature was originally published in Folio #1, Brickwork’s newest magazine devoted to exploring how architectural ideas are made real. Register here for your copy of Folio #2 out soon. Australia, you have unfinished business. It’s time to let our ‘fire people’ care for this land 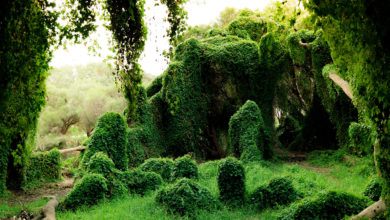 Where the wild things are: nature responds as coronavirus keeps humans indoors