As individuals struggle with how they can contribute meaningfully to the fight against global warming, landscape architect John Mongard commits to shift both his professional and personal life. As he describes, it’s time to plan and design landscapes not for image and amenity, but for survival.

When young people protest on the street and tell us that we are destroying their future due to our failure to act on climate change, we know we have really ignored all the signs. Who cares about climate change? We are numb to the issue because we are daunted by its size and extent. We can’t seem to face it and business as usual rolls on, even as the business community moves to grapple with the disasters it sees coming and governments fumble to justify measures for action they can ‘afford’. It’s time to call it out, as The Guardian does: we are beyond climate change, it’s now a climate crisis.

What has this got to do with landscape architects? They need to plan and design landscapes not for image and amenity, but for survival. They cannot continue to put parsley on pigs, because shortly the pig will be burning.

[T]welve years is the timeframe that my current planning projects are likely to reach fruition: this means I am effectively facing this design challenge right now

Scientists say that unless we drastically draw down carbon in the next 12 years, our ecologies and cities will bear the exponential disruption caused by a rise in global temperature of up to two degrees. It has dawned on me that 12 years is the timeframe within which my current planning projects are likely to reach fruition: this means I am effectively facing this design challenge right now. When I look more closely, it appears that many of my existing landscapes may not survive a two degree change.

What role will landscape architects like me play in helping stave off the ecological and social effects of an already existing climate crisis that seems set to worsen further?

If we need to become alarmed about climate change, ‘The Uninhabitable Earth’ is a good place to start. If we want to see how changes to our lifestyles might affect the imminent barometer rise, try the climate calculator. If we want to know whether minor tweaking to our professional work will help, or if we need to make more profound change, read about Professor Jed Blundell’s call for ‘deep adaptation’. Blundell argues that we need to plan not just for climate adaptation but also for disaster risk reduction, and within the next 10 years. In that time we can expect “increased levels of malnutrition, starvation, disease, civil conflict and war [that] will not avoid affluent nations.” He explains that reformist approaches to well-articulated professional and corporate sustainable development goals are redundant.

Business as usual is over. Given our failures to meet climate targets to date, this week is when I start designing for two degrees, so my landscapes will still be around in 2030. Built environment professionals need to stop worrying so much about image and worry more about building like our lives depend on it: within and for future habitats where humans, plants and animals can still actually coexist. We have to transition to cities and infrastructures made locally and from fully recycled materials; where we plant for shifting ecologies, embracing the spectrums of drought/heat and storms/floods; where the condition and quality of climate, water, energy, waste, food and soil are the primary drivers of design.

The Australian Institute of Landscape Architects has provided a good policy framework for practitioners to help build climate change resilience, but it’s time for each of us to move beyond reading policy. Climate change resilience efforts are now at the low end of the bar: two degrees requires deep adaptation design, which is a whole lot more challenging. Many communities will need to move to safer landscapes and begin the difficult transition away from current at-risk places and cities. We will need a national settlement strategy, as many places become hazardous or uninhabitable due to heat, lack of water, flooding, or all three. We will need a national food strategy, as import systems break down, nations pursue tactical hoarding, and food production collapses in various parts of the world, as identified by the UN over 10 years ago.

We need these ‘deep adaptation’ strategies now in order to manage change over the next 10 years. After this, it is likely that what are now design and planning problems will come to be seen as military ones, dealing with sovereign risk and resource protection. 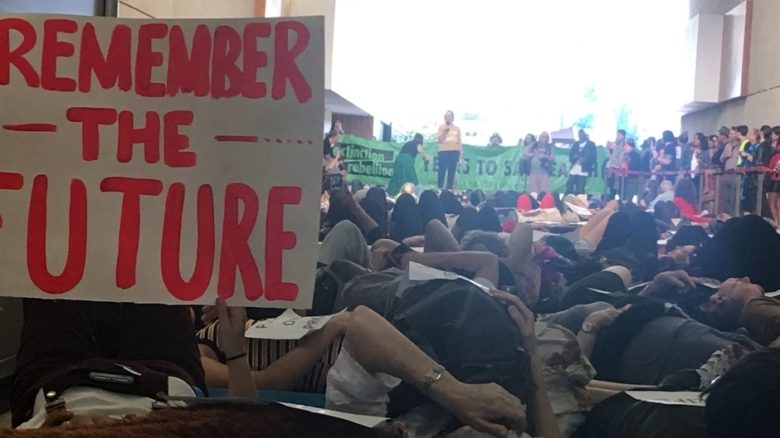 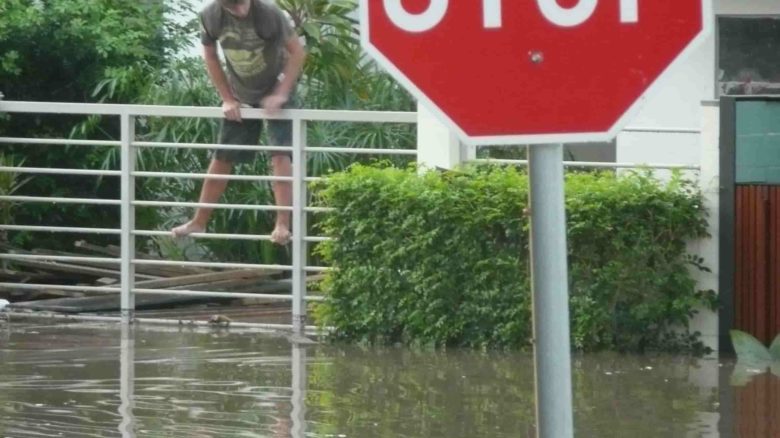 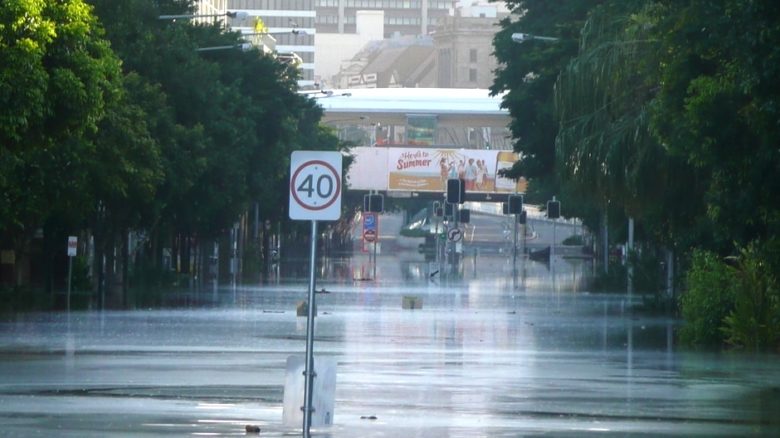 Flooding near my South Brisbane office in 2011. Photo: John Mongard

A landmark UN report this May called for ‘transformative change’ as a million species risk extinction. This transformational change is essentially the deep adaptation agenda suggested by Blundell, reaching mainstream world governance on biodiversity. The report concludes that biodiversity loss and climate change feed off each other in a vicious circle and that we have to save and create habitat in the process of also drawing down carbon. Conventional food and forestry landscapes may sequester carbon, but they will not also help to preserve the biodiversity which ecosystems rely on and that keep humans alive. As the world population grows, we continue to destroy ecologies, which poses risks as big as climate change.

As George Monbiot argues, no one is going to save us. Government and industry are moving much slower than the environmental and climate changes that are occurring. We have to help mobilize our communities to achieve local action and will need to rely on grassroots action. We have to change our professional focus and change it fast.

Elsewhere, Monbiot has noted that “a recent estimate suggests that around one third of the greenhouse gas mitigation required between now and 2030 can be provided by carbon drawdown through natural climate solutions (NCS).” He cites an analysis that suggests 37 percent of required carbon drawdown could be achieved through natural landscape-based solutions, involving ecologically-driven design and restoration. To draw down carbon, we will need massive reforestation, forest conservation and environmental habitat rehabilitation.

These are actions that landscape architects and planners can lead.

The 20 pathways for climate mitigation in the NCS study also show that landscape architects have to start seriously collaborating with agronomists and ecologists, farmers and foresters, among others, if we are to be a part of the deep adaptation the world urgently needs.

Of the 80 climate mitigation actions analysed by dozens of scientists in Drawdown, a third are actions that landscape architects can assist or lead on. But landscape architects will also need to arm themselves with expanded knowledge and collaborative skills in the planning and building of landscape systems and infrastructures for water, waste, energy and food.

Things I can do in the face of two degrees warming

Hiding is not an answer. Neither is denial. Acting to deal with our climate crisis through the power of community engagement, planning and design are things that built environment consultants can do. As for many others confronted by the scenarios presented by two degrees of global warming, I find there is a temptation to become despondent, and to want to sell all my assets and go to Patagonia or New Zealand and hide in a transition farm in the forest. But this helps no-one, so I have looked to the things that I can act on most effectively in the next 10 years. These relate to my ongoing community work and long-term projects.

For my part, I have decided to transition to a practice of three days a week, leaving me time to help my local community manage climate change in the next generation. My partner Jacqueline and I have run a practice that has spanned over  30 years: it’s time to transition my practice and work on climate change projects as a priority. To do this, we will scale back other work to leave time to research, to lobby and to act on deep adaptation challenges. We will focus on projects that are already planned and that we can implement in the next 10 years. Brisbane's West End main street: the large tree was planted in the middle of the road in 1995 through a community design project and now creates its own microclimate. We need to plant hundreds of big trees. Along with making personal lifestyle changes such as eating less meat, flying and driving less, buying local and reducing waste, I will act on local and regional community projects that can counter some of the climate crisis challenges. There are seven ways I can think of to make deep adaptation the driving concern of my projects and reprioritise my professional goals.

Firstly, I can help implement community action plans already in place in my Brisbane neighbourhood. The Green Space Strategy by the West End local community identifies 11 hectares of green space that can be reclaimed in the existing commons. We can ramp up community action on this to reduce urban heat and draw down carbon locally in the next 10 years. Green space strategies like this could easily be led by landscape architects working in each local district with their communities. Mobilize your friends and colleagues within your local neighborhood! Make a community action plan around deep adaptation and green space.

Secondly, design and build forests and re-wilding areas. The Living Classroom project in Bingara, NSW diverts flood water into three kilometres of biodiverse forest around a chain of lakes and billabongs. I will help continue this reforestation and the adjacent permaculture farm. In my local neighbourhood, I will look to help create and rehabilitate local waterways, parks and wasted spaces: the local community in West End identified 12 potential new waterway parks to rehabilitate in unused crown lands.

Third, build city farms and urban food gardens. Reclaim unused commons with local communities: we will need to bring food close to home in the future. Jane Street Community Garden in West End is on a street verge and is run by a not-for-profit association supporting local gardeners. It reclaims about 1000-square-metres of land that was not being used in the road reserve. 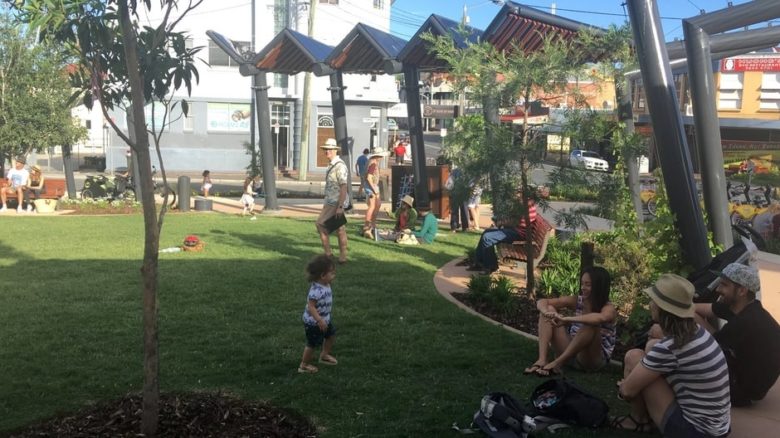 West End green space in Brisbane: Bunyapa Park is a new park lobbied for and designed by the community. 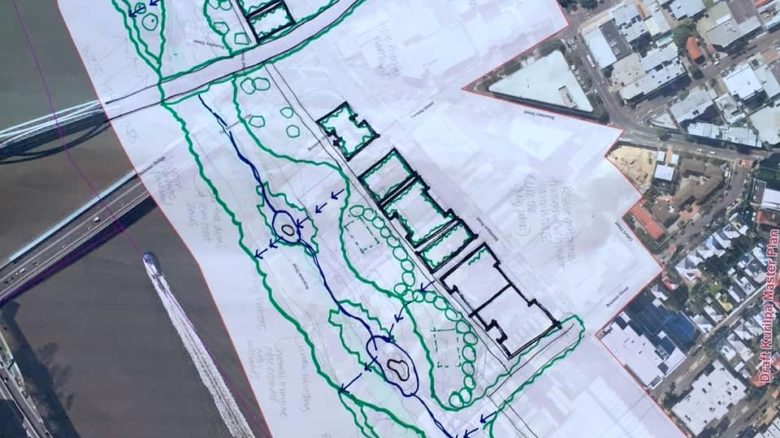 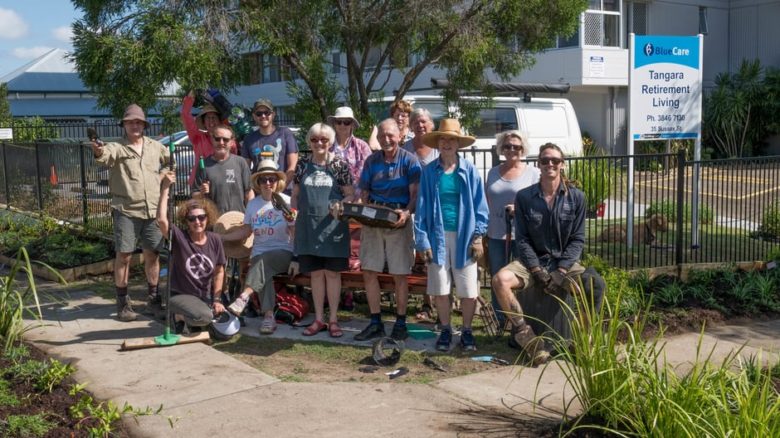 The fifth idea is increasingly important for Brisbane and Queensland: deep adaptation for flooding. My neighbourhood of West End flooded in 2011 and will certainly flood more often with a two degree climate shift. Flooding strategies can be enacted with strong government intervention to transition homes and businesses. The Blue Strategy in the Green Space Plan identifies ideas for at-risk areas to manage flooding locally in the West End peninsula.

Sixth, plan and build regional food production farms to produce all the food that we need within Australia. We will need to help rural communities most as the climate crisis unfolds. The Tweed Shire Sustainable Agriculture Strategy refocuses a productive region back toward a closed loop food system. The Charleville date farm was built by volunteer pastors, a family and some helpers. It recycles all of the town’s wastewater, rehabilitated a degraded desert landscape and produced its first date crop after five years. 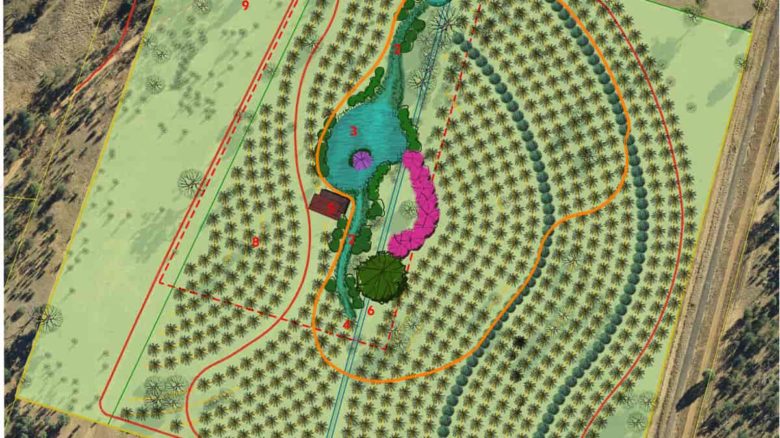 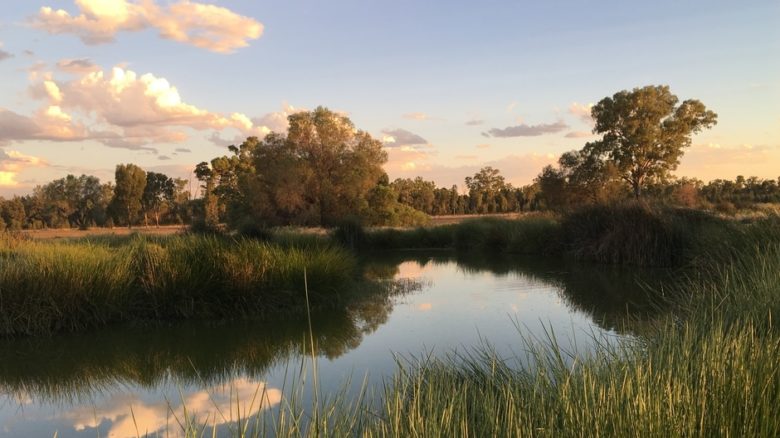 Lastly, I will be politically active, lobbying hard for a national deep adaptation agenda to create a program, funds and resources to deal with progressive climate crisis impacts. I will push for urgent policy change and immediate action at all levels of government. I will join Extinction Rebellion.

We can’t afford to tinker at the edges. We need rebellion, not mere reform. Everyone can act to make change but built environment professionals have an immediate role to play. We are being called to work with landscapes and ecologies on a fundamentally deeper level: it’s a call to arms to prevent imminent ecological and climate collapse within our lifetime.

John Mongard writes about place, landscape and art. He is a sitting member of Foreground‘s Editorial Board.