What kind of island would you create?

Islands hold a special place in the public imagination. They can be places of either escape or exile, of dreams or nightmares. Foreground takes a look at the winners of a recent competition asking the design community to design islands from scratch.

Islands hold a special place in popular imagination, particularly in Australia, being the island continent. Books, music and television have launched many cherished stories about what constitutes our particular version of ‘island life’.

The Warumpi Band’s 1987 single, ‘My Island Home’ for example, longs for Elcho Island, off the Arnhem Land coast. Its younger cousin – Christine Anu’s cover of 1995 – shifted and expanded its scope to Australia, as the ‘island continent’, which was sung to the world at the Sydney 2000 Olympics.

But just as much as an island can be treasured as a seaside paradise, Australia’s had quite a history giving certain islands a reason to be feared. Of course, Australia isn’t alone in this. As a unique landform that is both cherished and reviled for its propensity to isolate, those in power have co-opted the opportunities presented by islands for centuries.

But what if you got the chance to revise what an island could be?

That’s what LA+ – the University of Pennsylvania’s School of Design’s Interdisciplinary Journal of Landscape Architecture – has set out to do. In anticipation of their Imagination issue, LA+ asked people around the world to design a new island, anywhere, programmed in whatever way they wanted. After 180 proposals, the competition jury wound up with five winning entries and ten honourable mentions.

Here are the five winning proposals. Billed as an island that continues to thrive by eating itself, this proposal is a less-than-subtle reflection on the waste we dump into oceans. Whether it’s microbeads or microfibres washing into the sea, Pla-Kappa is a proposed island that will consume on the island that which was once consumed on land. Located in the North Pacific, the island is a shape-shifter, with waste defining its evolving form.

More a sci-fi ecological fantasy than a traditional island, this proposed island feeds off of what we expel – growing “taller, more entangled and more buoyant” as a result. Its creators say it will be the site of new species seemingly designed to placate our environmentally destructive habits. Here, plastic-eating bacteria and styrofoam-eating mealworms metabolize the island’s parts.

Could this be too good to be true? 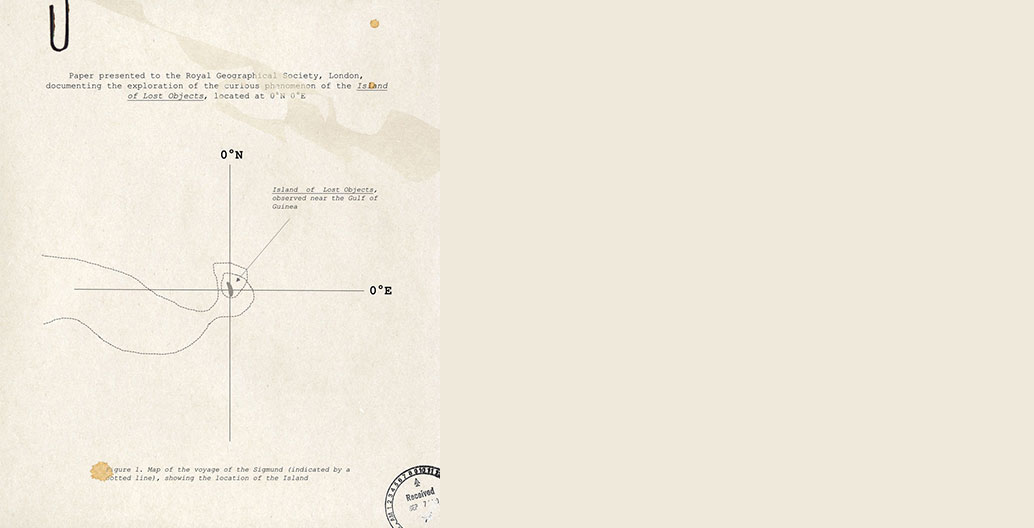 The title paper presented to the Royal Geographical Society. The Island of Lost Objects, and its physical counterpart. Charting the topography of the lost isle.

The Island of Lost Objects is a mystery. Bowring discovered some dusty documents at London’s Royal Geographical Society and identified an ‘Island of Lost Objects’. The documents place the island at the globe’s null point (0.00, 0.00). In a strange twist of early exploration however, Bowring found that the island had previously, somehow, been located round the world at its antipodal point in the middle of the Pacific Ocean… its “geographical Other”

Bowring describes what is now knows as Howland Island as imbued with a sense of presence and absence. It is an island invested with an aura of loss. This rediscovery forms a contemplation “of all lost objects: love, civilizations, innocence, missing persons, MH370, passenger pigeons, the Great Buddha of Bamiyan”. The coastal paradox wants to redefine the parameters we raw around the natural world, and by extension, human nature. Fungi exists as a being both living and dead. It exists without excretory organs, that is, without the ability to eject unwanted biological material. Instead, what we would consider “dead” is collated within the fungi’s cell walls. Here, the binary between “living” and “dead” doesn’t apply – and this categorical challenge to binary difference is what the creators of Coastal Paradox want you to consider, in the context of what makes an island. How can we rethink the island through the lens of fungi, where “there are no islands, no binaries, no edges, no objects, no beholders, no life, no death.”

Instead of boundaries, they want you to rid your vernacular of the divisions that have carved up your world (both physically and mentally): “Through increasing our vocabulary of edges and challenging the existence of an absolute island, we seek to question other binary divisions: racism, sexism, speciesism, isolationism.” How the UPN could populate itself. A triptych of the United Plastic Nation (UPN). 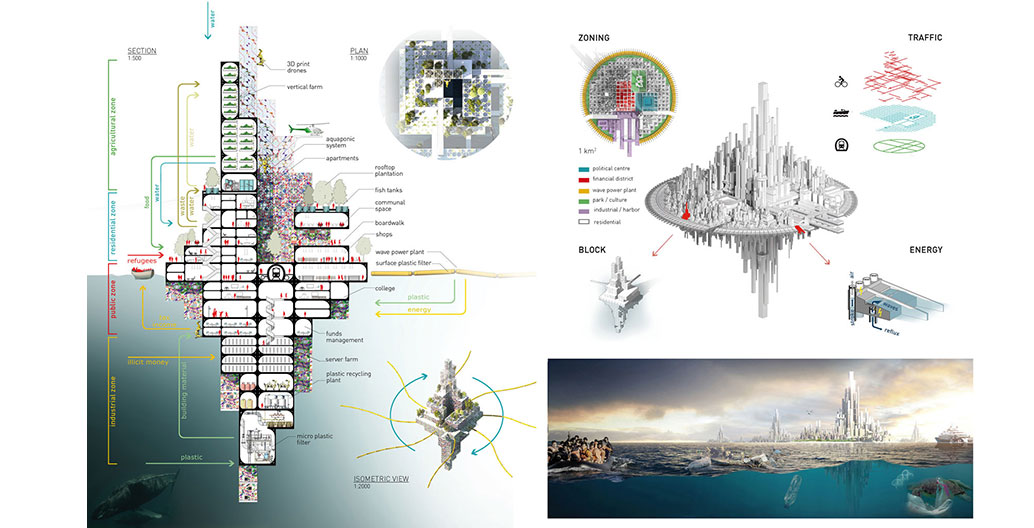 A breakdown of the how the UPN works.

Seemingly another product of the sci-fi playbook, ‘United Plastic Nation’ is reminiscent of Howl’s Moving Castle. It’s a floating-city structure that floats between nation-states, actively seeking to rid itself from the shackles of how we conventionally define national identities. Traversing the world’s oceans, its touted self-sufficiency seems a little too good to be true:

“…it collects and recycles plastic from the oceans. Building material is produced, which is then 3D-printed by a swarm of robotic drones. Layer by layer, they build a completely self-sufficient city”.

There is another cause for alarm with this island: “the United Plastic Nation is bound by no national laws, thus enabling it to function as a tax haven and generate revenue”. While its dreams are utopian, this positioning fails to recognise that tax havens the world over have ruined the lives of the very people it seeks to shepherd, “ the army of forgotten and dispossessed who are stuck in between”. 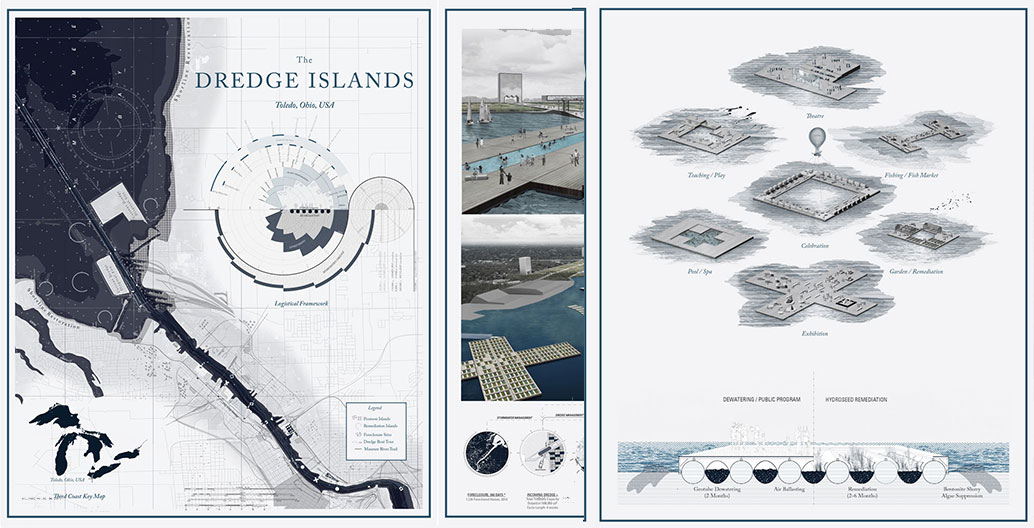 The multiple ways you can program the dredge sediment. 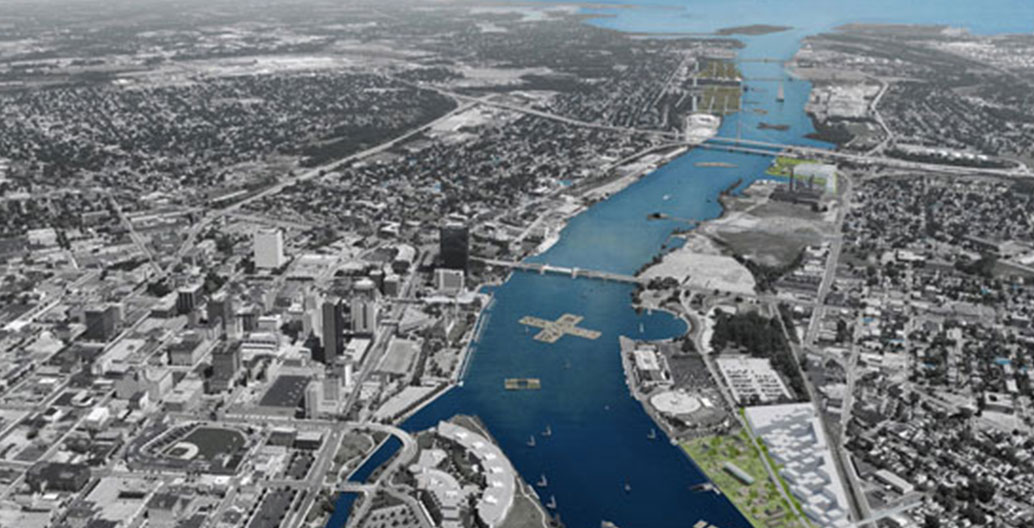 The dredge projects in the context of the Maumee River. 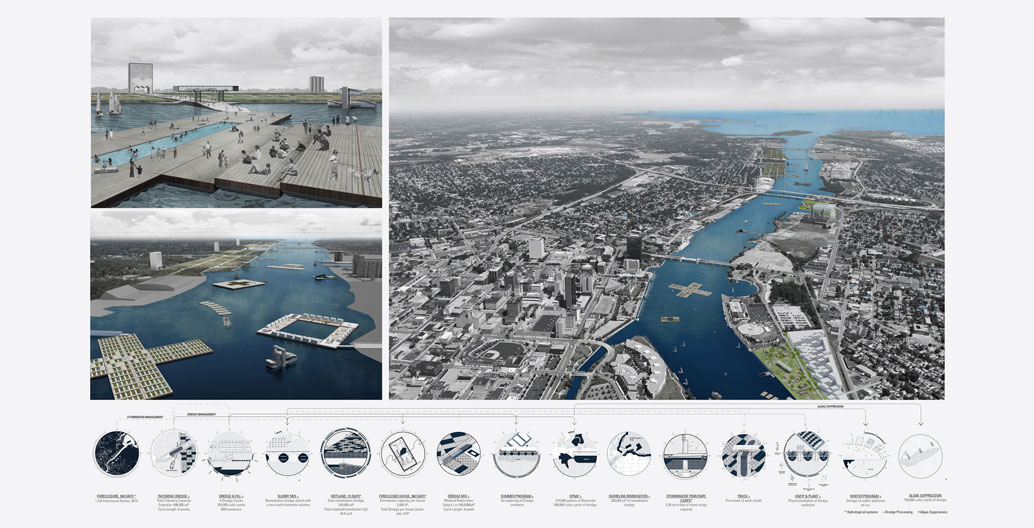 A view of the ways the dredge islands could look.

Getting dredging to work is the remit of this ambitious proposal from North America’s Great Lakes Basin. Located in the Maumee River in Toledo, Ohio, this looks at how dredge material can give public space back to a city. Differing from a traditional “island” (or traditional “land reclamation” practices), the dredge material is morphed into a series of pontoons floating down the Maumee River, available for various public uses, such as a theatre, exhibition, or learning space (all on the water).

The above five winners will be published in the forthcoming issue of LA+ (the ‘Imagination’ issue). View the jury report here.