Mending the mistakes of the Anthropocene

Much has been made of the fact that we’re now living in the “Anthropocene”– a period of unparalleled human domination where the earth has forever changed due to our actions. But while the mess we’ve made of the planet is a lot to worry about, a recent wetland restoration in Perth demonstrates that human intervention might un-mess the planet, too.

“I’ve done a lot of work around river restoration, and the challenge we’ve always had is how we translate research into on-ground activity,” says Professor Peter Davies, Pro-Vice Chancellor (Research) at the University of Western Australia. “But when I was there on the ground, I could see the research translated – and I think it’s an example that more councils should adopt.”

Davies has dedicated decades of his life to research in water management and riverine ecologies. Having first been shown this wetland restoration by a student, he was compelled to write a letter of congratulations to the City of Bayswater Council.

“Councils are risk-averse, so spending the money on a wetland is one thing, but having it fail, or having the water flows going the wrong way is another issue they would have been concerned about,” says Davies. “So having the right people with the right vision to see things through is what made the Eric Singleton project work.” 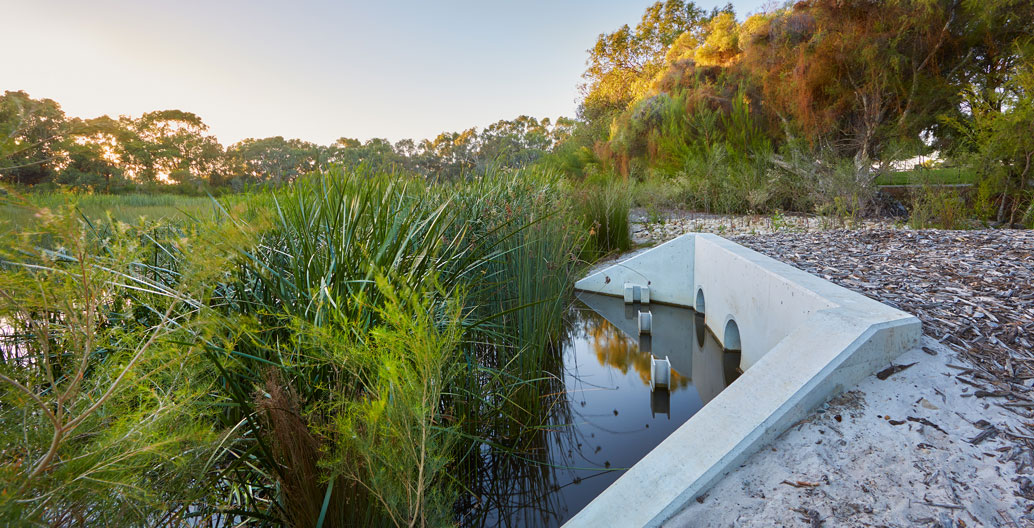 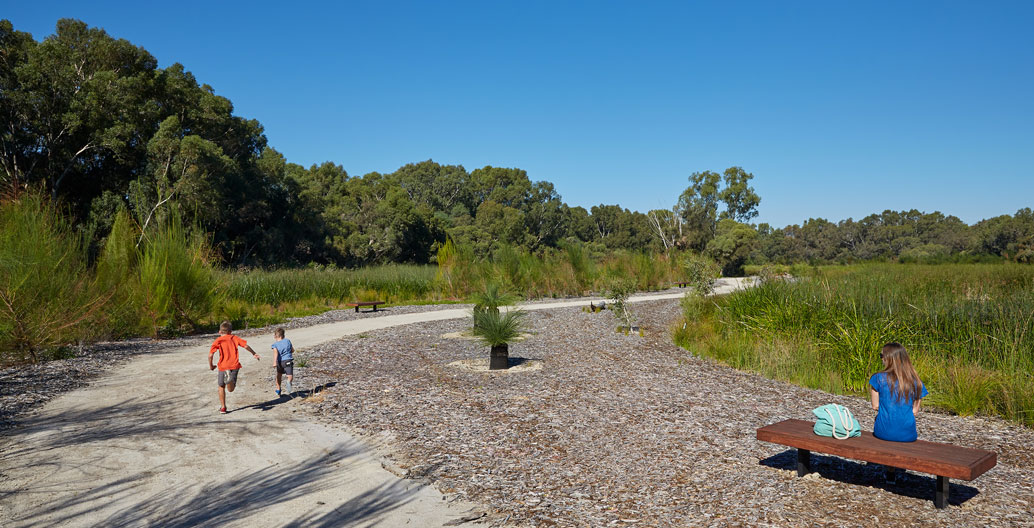 The deep marshes allow for a greater removal of nutrients from the water. Image: Marion Dalton. The wetland (top-left) in the context of the brook. Image: Douglas Mark Black. The area that became the wetlands was drained in the 1950s, with surrounding land used for landfill between 1972 and 1981. The site saw a build-up of heavy metals and the formation of mono-sulphide (a toxic material that may release acids when exposed to air). When it was artificially converted to a permanent wetland during the 1970s, it became a polluting water body feeding straight into the Swan River.

“The site was a little strange when I first came to Perth. Some of the plants were overgrown, and bird numbers were declining sharply,” says Martin Coyle, principal of landscape architecture and urban design at GHD Woodhead and lead landscape architect on the wetland restoration. “It wasn’t a place you’d want to hang around in.”

In 2012, the council – in partnership with the Water Corporation of Western Australia, the WA Department of Water and Environmental Regulation and GHDWoodhead – kick-started the wetland’s $3 million regeneration process.

“Essentially, we were billed to ensure the wetland would take out the majority of the sediment flowing through it,” says Coyle.

To do that, the team had to create an elaborate u-shaped wetland running through the site’s existing (but failing) bird sanctuary to filter water from the adjacent Bayswater Brook. The first stage diverted 200 litres per second of water from the brook, taking the water through a series of aquatic water zones for a period of 48 hours.

The first zone, otherwise known as the “gross pollutant trap”, is said to remove 27.5 tonnes of pollutants annually. Water then moves through a sediment basin designed to capture finer pollutants and suspended solids, eventually heading directly to the wetland via a series of shallow and deep marshes. With vegetation-density running to about four to six plants per square metre, this allows the water’s nutrients to settle and eventually be absorbed. 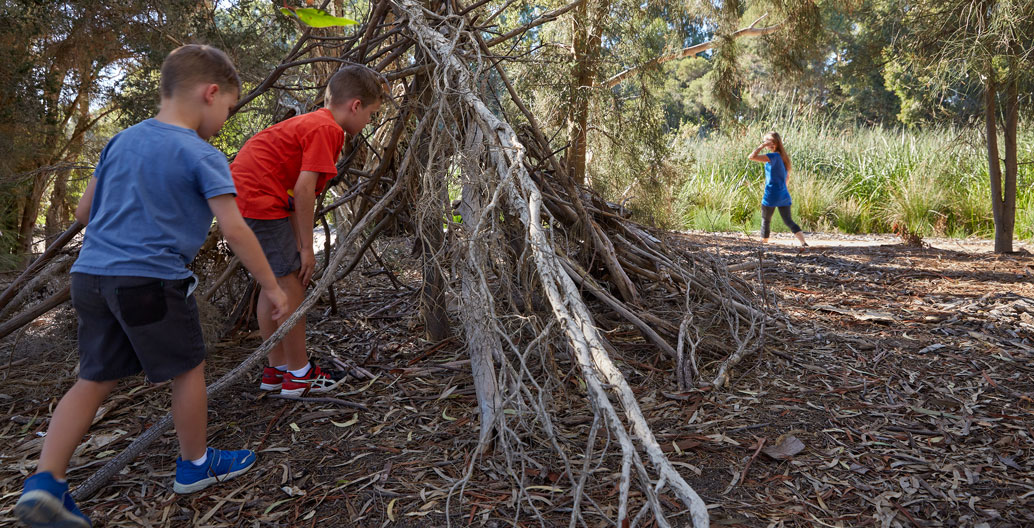 The wetland before the restoration. Image: GHD. 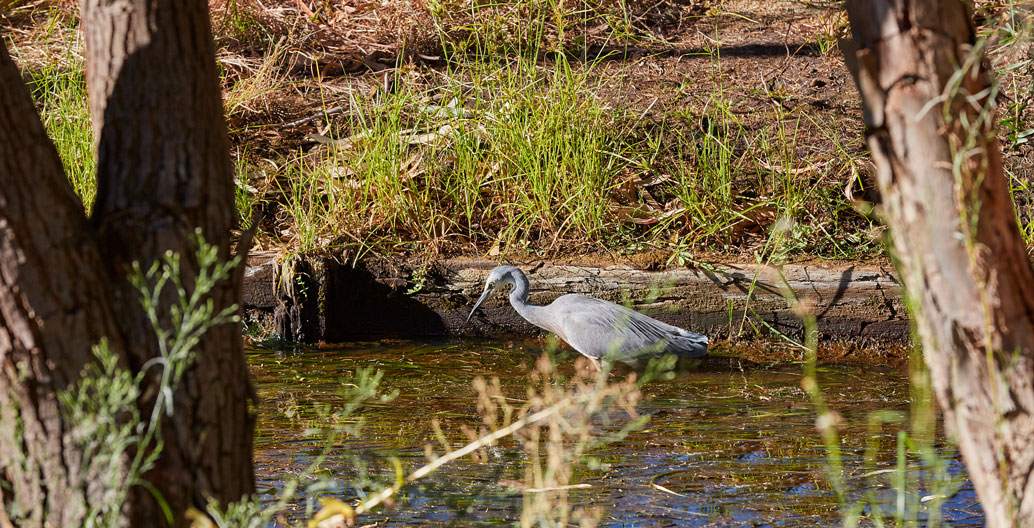 Herons have returned to the wetlands. Image: Douglas Mark Black. 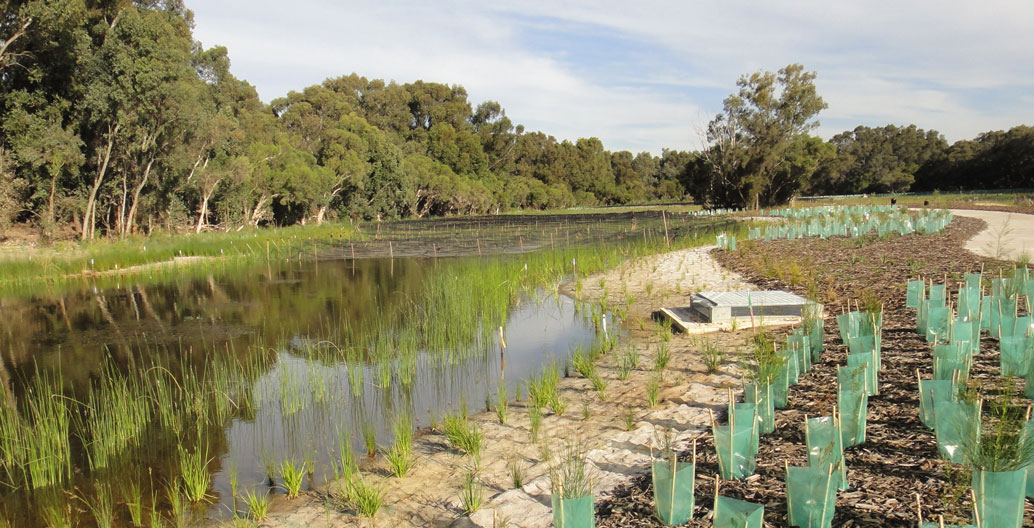 This freshly planted vegetation is said to prevent 200kg of phosphorous from entering the Swan River each year. Image: GHD. An aerial view of the sanctuary. Image: Douglas Mark Black.

After 48 hours, the nutrient and pollutant-stripped water flows back into the brook and out to the Swan River. The City of Bayswater council says the wetlands will prevent 1.35 tonnes of nitrogen, 200 kilograms of phosphorous, and 40 tonnes of sediment from entering the Swan River each year.

In the year since the project’s completion, it has received numerous accolades, from the annual WA Premier’s Awards, to the Australian Engineering Excellence Awards and now an award from the Western Australian chapter of the Australian Institute of Landscape Architects for Land Management.

For Davies, though, the critical contributing factor wasn’t professional expertise, but cultural values.

“To me there’s a broader question underneath this project,” says Davies. “What limits us is not technical or ecological knowledge, but social context. You need to have people think something like this wetland is valuable and a ‘good thing for us to do’.”

While the council’s restoration signalled a shift in values with regards to our waterways, not everybody around it shared in these new values. In July 2016, the Western Australian Planning Commission approved a land subdivision for a 27-lot development abutting the wetland, overruling the council’s attempt to create a “buffer zone” to community outcry. The incoming WA government, however, saved the day, announcing in April 2017 that it was matching the City of Bayswater’s $1.5 million pledge to buy the land, taking the site off the development market.

“I think there’s been a change in perception of what water in urban places can do,” says Davies. “People are starting to realise we can have constructed wetlands function like natural ecosystems.”

The Eric Singleton Wetland Restoration, then, is one hopeful instance of anthropogenic change free from the destruction that otherwise defines the Anthropocene.

The Eric Singleton Wetland Restoration is the 2017 Western Australian winner of the Australian Institute of Landscape Architects’ Land Management Award of Excellence. 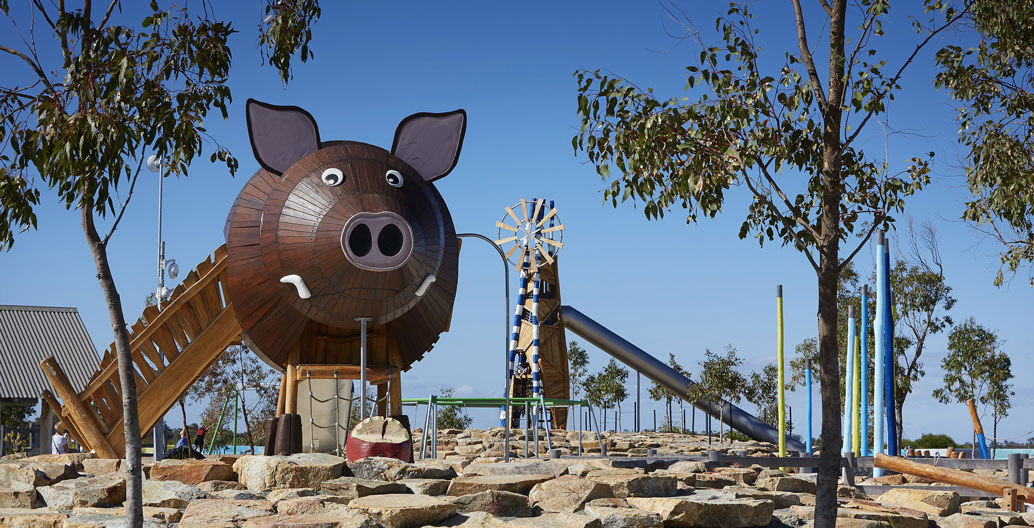 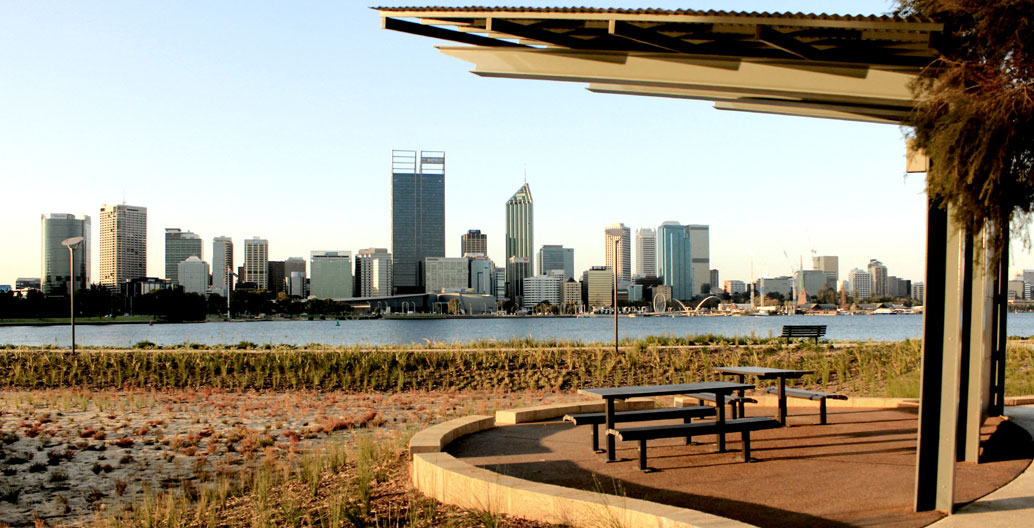 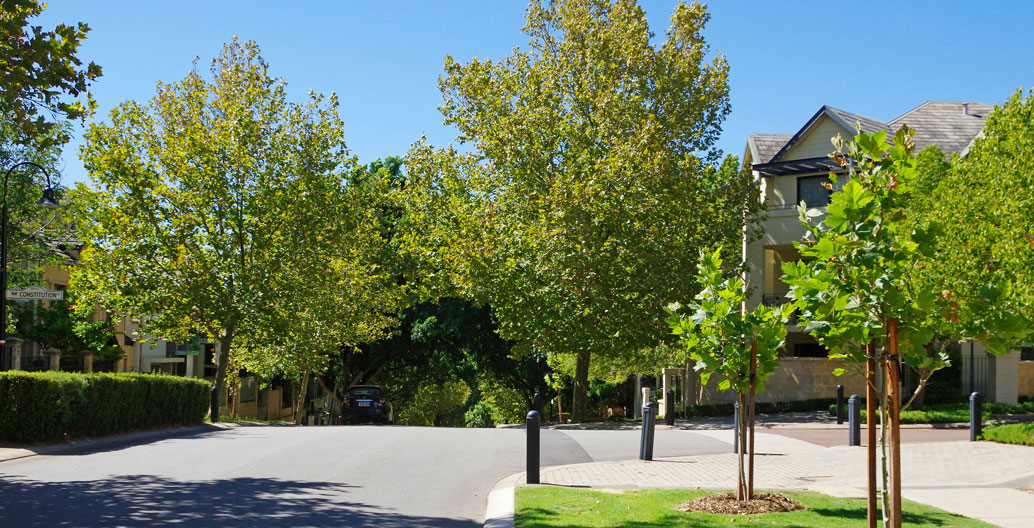 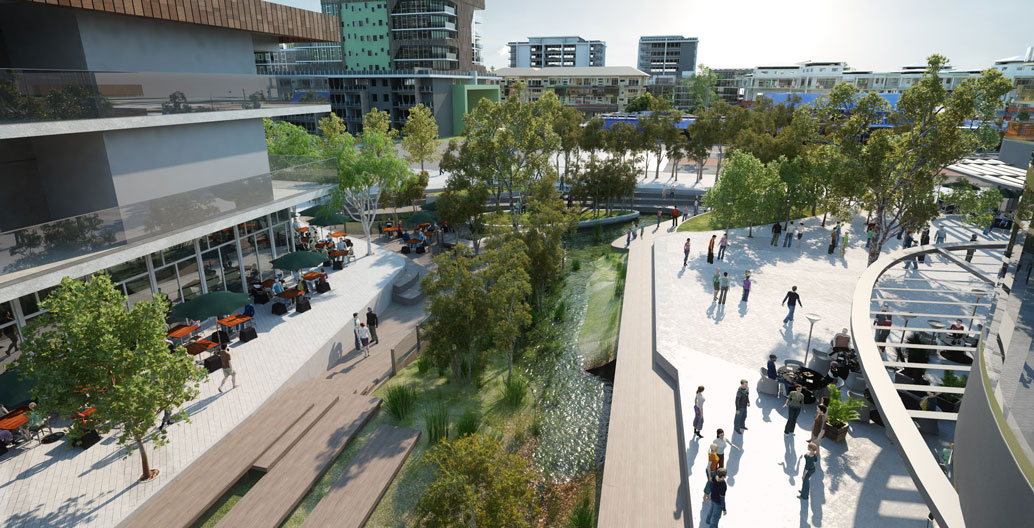 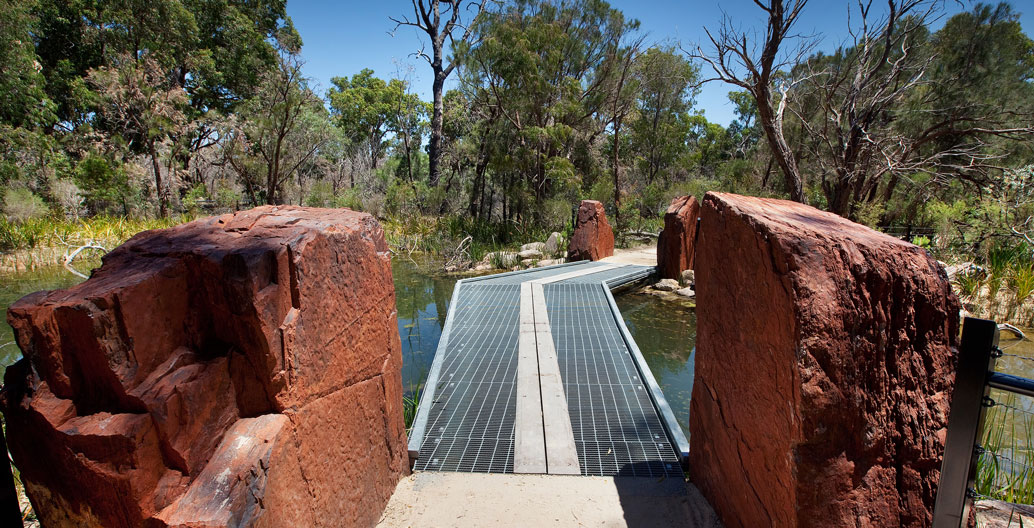 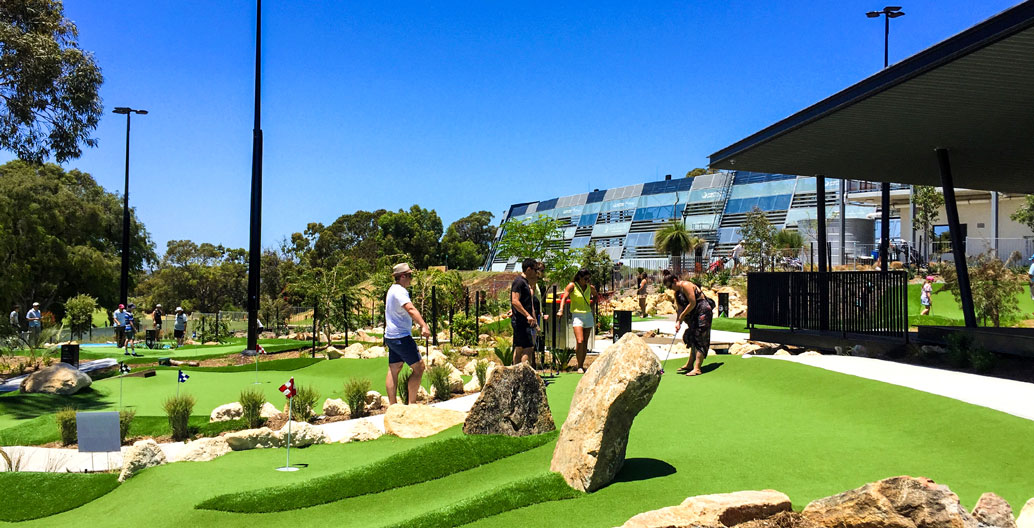