Despite its lush landscape, Sydney has lagged other Australian cities in developing an urban farming culture. With the opening of two new urban farms in the city centre, though, that looks set to change.

It’s a warm spring evening in Sydney. Residual moisture still infuses the air from the first rain we’ve had in what seems like forever. It wasn’t even real rain, more like semi-sustained drizzle, but it was enough to lift parched spirits. So, when John O’Callaghan from Idea Bombing asks those gathered at the Edible City event to imagine a city with streets full of food instead of just ‘street food,’ a city in which you could pluck greens for a salad on the way home from work, you can tell that the young crowd thinks it might just be possible.

Idea Bombing is about brainstorming, so, lubricated by wine, audience members write their ideas for how to turn Sydney into an edible city up on big sheets of brown paper. For inspiration, they draw on short talks by Nick Ritar, director of Milkwood permaculture; Emma Bowen, co-founder and general manager of Pocket City Farms; landscape architect Mike Horne, founder and director of Turf Design Studio; and Angie Sceats, head chef at Two Good catering. As you might expect, the resulting ideas range from fanciful – “What about growing food on top of trains?” – to practical – “Plant Indigenous food forests in parklands.” This last points to the fact that before colonisation, before there was city, the Sydney area was a veritable smorgasbord.

And to a certain extent it still is. Gardeners have always lived in the city. They make the most of the dirt they have, be it a suburban quarter acre or an inner-city patch. And those without land have been encouraged by the likes of Sydney-based media personality turned gardening guru Indira Naidoo to grow food in pots wherever they can. Naidoo’s first book, The Edible Balcony, 2011, documents her own efforts on the 13th floor of a Sydney apartment block and has sold some 20,000 copies. “We are a place where people can walk in any day and see what we do”, Pocket City Farm co-founder, Emma Bowen. 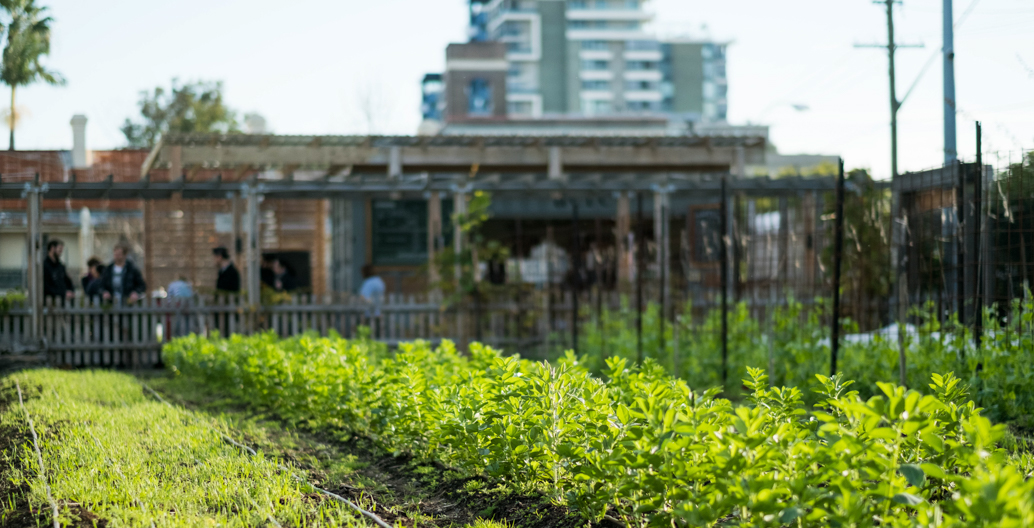 The average median price for a house in Camperdown is A$1,400,000. Image: Pocket City Farms. 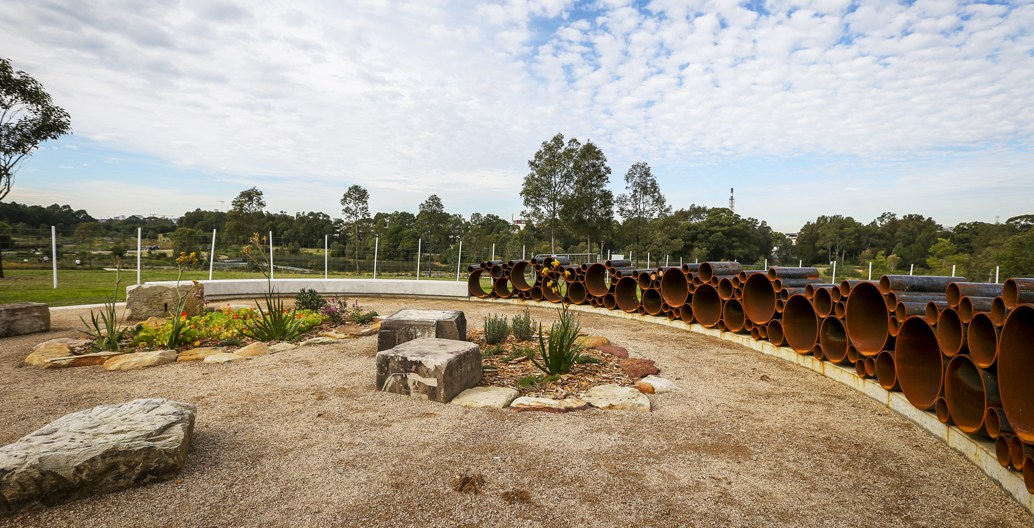 The farm may increase its footprint in the 40-hectare park, which currently starts at half-a-hectare. Image: City of Sydney.

Nevertheless, Ritar is right when he points out that access to land is the biggest challenge to those who want to grow food in Sydney on a large scale. Property prices are simply too high. It’s no coincidence that Detroit (a city in which even today you can buy vacant lots for less than the price of a nice pair of sneakers) has been in the vanguard of an urban farming revolution. Even Melbourne and Perth put Sydney in the shade when it comes to inner city farms. But things are starting to change.

“Sydney has been a bit behind,” admits Belinda Thackeray, project manager of the City of Sydney’s first council-run urban farm. The horticulturist has been developing the Sydney City Farm, due to open 29 October, for over two years. Set in Sydney Park, St Peters, on half-a-hectare (approximately 5000-square-metres) of land, the farm may eventually increase its footprint on the 40-hectare site. Access to land, then, is not Thackeray’s key concern. “Trying to find ways to involve people is our biggest challenge,” she says. Sydney’s citizens are very keen to participate.

Although Sydney City Farm will allow numerous volunteers to get their hands dirty, it differs from the 20 community gardens on the council’s books in that those who volunteer don’t get to keep the literal fruits of their labour. Thackeray’s aim is for Sydney City Farm to be financially self-sufficient (eventually) and it will run a farmer’s market to sell what it grows. “Produce will be invested back into the project,” she explains. But making money isn’t the primary goal. Sydney City Farm is at heart a social enterprise with educational aspirations. It’s about people learning skills they can apply elsewhere, and giving them access to living crops they might otherwise only ever see as products in the supermarket.

Pocket City Farms was Sydney’s first urban farm project. It opened on the site of an old RSL bowling club in Camperdown in June 2016, as part of the Camperdown Commons is initiative of the Canterbury-Hurlstone Park RSL. Pocket City Farms is a not-for-profit organisation, and it too concentrates on education. “Our three pillars of focus are local food, education, and community,” says founding member Bowen. “We are a place where people can walk in any day and see what we do.”

But like all farms (as opposed to gardens) Pocket City Farms is also a business. Bowen explains that their income is divided roughly 50/50 between selling produce and running workshops (by the likes of Ritar and Naidoo) or selling merchandise.

It took the Pocket City Farms team five years to find a suitable site in Sydney to start their urban farming project. And even now, at 1200-square-metres Bowen says they could do with “four times that much land to be able to make a more viable income from growing food.” While pollution, bugs, possums, vandalism and theft (Kevin Bacon the pig was stolen from The Grounds garden complex in 2013) are ongoing challenges to urban farming, access to land remains the biggest barrier to large scale food production in a city like Sydney.

Back at the Edible City event, the Idea Bombing speakers offer some possible solutions. Bowen calls for local and State governments to give incentives for landowners to “unlock their space” for farming. Landscape architect Horne suggests growing vertically and modifying governmental design guidelines to require all new developments include 30% green-space. Chef Sceats advocates planting food crops instead of grass around large council owned flats to increase access to healthy eating habits for disadvantaged communities.

But Ritar (who actually has access to plenty of land at Melliodora in Victoria, perhaps Australia’s best known permaculture farm) has the most radical and inspiring vision. While the notion of driverless cars gives many of us the heebie-jeebies, Ritar suggests that this technology could have an upside: potentially driverless vehicles will reduce private car ownership and free up space that is currently used for parking. Ritar foresees street-side and rooftop car-parks becoming veggie plots.

Let’s hope some of these ‘idea bombs’ explode.