Streets are always political: in conversation with Cassandra Chilton

Cassandra Chilton is a landscape architect, artist and founding member of The Hotham Street Ladies. Here she contemplates the intersections between her creative worlds, feminist streets and her current obsession with uncovering Melbourne’s hidden grottoes.

FG: In your review of the 2017 NGV Architecture Commission Garden Wall, you wrote “…the fence is a measure of control to create territory…what’s it keeping in, what’s it keeping out?” This line suggests, in the context of the street, that all walls and barriers are political. Have you thought much about current moves to control and limit access to the street, such as the proliferation of concrete bollards in our city centres? What does this mean for contemporary society?

CC: Streets are political spaces. They should be our most democratic spaces because they are shared by so many users, all with different interests; political, personal and financial. It’s important therefore to ascertain and find the right measure of those interests, as they play out in the street.

Often it’s a battleground between traders and the public, in terms of commercial exchange, health and wellbeing, pedestrian space, the social value of encountering people on the street, of having community, of it being safe, in line with Jane Jacobs’ idea of ‘eyes on the street’. But traders and people who are commercially vested have different interests. This is problematic, and often results in a fight over parking. At the base level, the question of how much space cars and parking takes up in any retail strip is the most boring thing you have to approach, but also the most critical.

If you read any council policy, streetscape or structure plan, for any shopping strip, it will most likely contain rhetoric about the need for more green spaces, more trees, better for pedestrians and cyclists. Meanwhile, the maintaining of existing car parking numbers are rarely specifically stated in council policy documents, yet that’s always the first thing that comes up in discussions. Trying to create more space to do more things on the street always involves railing against parking.

FG: How have your upgrades to Greville Street in Prahran addressed some of these ideas?

CC: Greville street is very narrow, so to turn it into a truly shared street by removing all the curbs made sense. Our design approach intentionally made it difficult for cars to use the street, to slow the traffic down in order to create more opportunity for activation of Grattan Gardens and the shops on either side. Greville Street will be an important link through to the redevelopment of Cato Street and connect to the station trams. It made sense to enhance the connections between many modes of transport, and to prioritise pedestrians and cyclists, including beyond the briefed site.

FG: Picking up on this idea of identifying opportunities outside the immediate territory, is there a responsibility for designers to interrogate the limits of the brief?

CC: Yes. All of these places involve community consultation with reports generated about community and social desires. But that’s just about the people who attend. When designing the public space of the street, we need to think about the people who aren’t at those organised meetings. How you can truly begin to understand the site through analysis, observation and research, to make it an inclusive space and make it speak to the culture of the place. Every street is slightly different and has a different mix of people that use it.

We’re currently designing a small, interesting street in Camberwell. It’s next to Camberwell Railway station, which has been a site of community activism about development, and it’s adjacent to some amazing edwardian buildings, such as the old coffee palace. We’re trying to introduce contemporary tropes by re-sampling the edwardian rockery, taking materials that are specific to the way that Camberwell and Prospect Hill historically posited itself, and trying to contemporise that style of planting. We’re using succulents and rockery plants – types of plantings you wouldn’t normally put into the street to create a new place that speaks of Camberwell’s identity. I’ve been looking at Melbourne’s Edwardian grottoes as landscape curiosities, and looking at the different ways they were constructed. I want to put grottoes in everything at the moment! 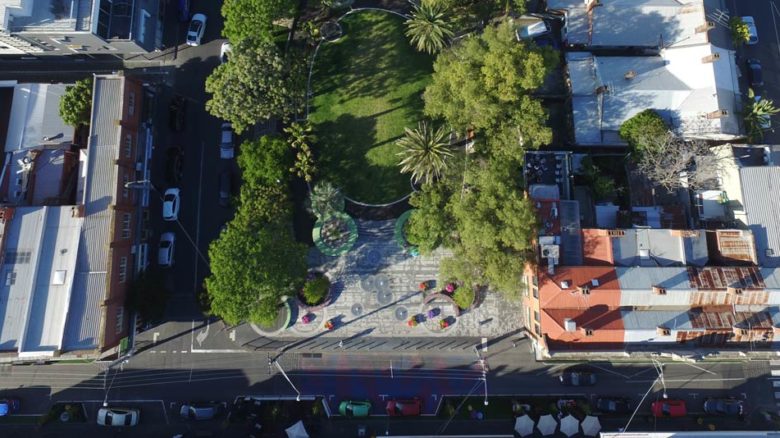 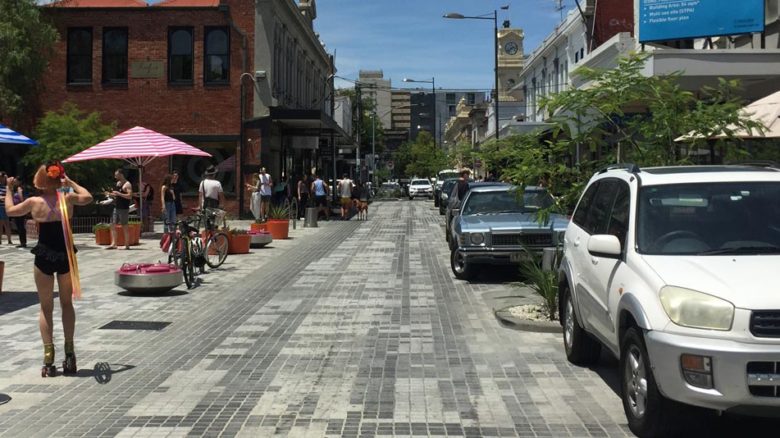 “People do need to feel safe in the street, but we know that statistically the least safe place for a woman is in the home.” – Cassandra Chilton, Rush Wright Associates

CC: ‘There will be blood’ was a programmed feminist event in Duckboard Place, which we ran in conjunction with the City of Melbourne. It was about taking menstruation out into the street and getting people to embrace being public about it. We also created ‘You Beaut’ – a small piece included in the exhibition within the gallery – where we took a particularly male bit of graffiti, and graffitied a big menstruating uterus over the top. In the laneway we did a huge menstrual pour and almost 100 people came and decorated the bleed and swore their blood names; names that they gave to their periods, or their ovaries, which they piped onto the wall. For us it was trying to feel comfortable in public space by doing slightly unconventional, temporal installations that are also speaking about women’s issues in the charged public space of the street or lane.

FG: How has your feminist artistic practice influenced your landscape architectural practice?

CC: After that installation I gave a talk at Role, a RMIT student symposium which led me to write an article for Landscape Architecture Australia. I had been thinking, “Why am I so interested in being a feminist as an artist, but why is it harder to do that as a landscape architect?” The salary survey report had just been released, and I was really cross about it. For the RMIT talk I set up a series of provocations to the female students. One was about setting parameters around some of the bad habits learnt as students, which can inhibit women later on in practice. For example, it shouldn’t be a badge of honour to work ridiculous hours, so how can you re-set the culture before you even get into an office?

Aside from the issue of salaries, there’s also the discourse about how spaces would be different if more women were more involved in their design. The interesting thing about that debate is talking about access and spaces for children. Often it gets caught up in a discussion about safety. People do need to feel safe in the street, but we know that statistically the least safe place for a woman is in the home. It would be more valuable to talk about functionality of space, about co-locating services and a whole raft of other things. Instead, often the perception is that it’s unsafe at night to be in public. Yet, Melbourne is actually a safe city. To be attacked on the street, whether female or not, is a rarity.

At this year’s International Women’s Day breakfast (hosted by Planning Institute Australia) Clementine Ford spoke about what she thought the city would be like if it was designed by more women. She talked about the prevalence of sexist advertising; what we see, and what children see, without any context, like a woman in a pair of underpants leaning provocatively over a couch. 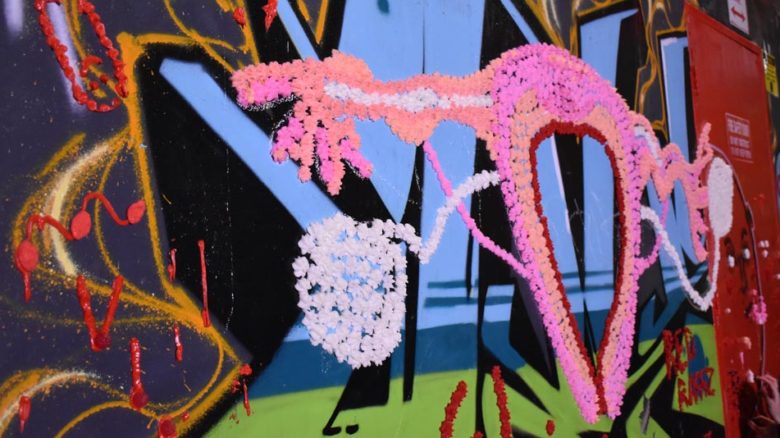 'There will be blood' was a Hotham Street Ladies public art event staged in Melbourne's Duckboard Place. 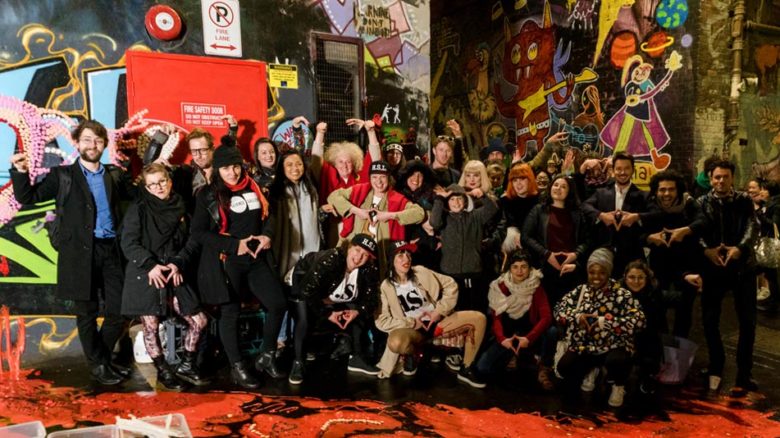 Nearly 100 people joined HSL's art event, 'There will be blood', as part of Melbourne Science Galleries 'Blood' exhibition in 2017.

FG: Are there particular streets – good or bad – that stand out for you?

CC: I’m continually redesigning Station Street in Fairfield in my mind. That is the street that is closest to my house. It’s where I go shopping and take my son to the library. It’s undergoing a streetscape plan at the moment and I’ve attended the community consultation and tried to participate as a citizen, but it has a lot of problems that need to be solved. It’s all about a decision, made long ago, to put angle parking into a street not designed to accommodate it. What would it be like if you could convince the traders to do away with that parking?

FG: There’s been a lot of pushback from the local community against the proposed Nightingale 2 housing development along the railway line. What’s your take?

CC: I’m all for the Nightingale model, and I’m also all for medium density development around train stations. Buying that really narrow Public Transport Victoria land is an easy win, but that’s not the place to develop. Open space corridors are things that we should hold sacrosanct: you can’t make them again, especially as suburbs get denser.

The landscape of Fairfield Station is the result of community effort and people feel invested in it. Nightingale is trading off all that, but I don’t see what the community is getting out of that development being there. Whereas you can knock down two shitty weatherboard houses and have the same sized, better-serviced site that doesn’t require compromised interfaces. Why not build a four storey building there, on the other side of the street?

“Open space corridors are things that we should hold sacrosanct: you can’t make them again, especially as suburbs get denser.” – Cassandra Chilton, Rush Wright Associates

FG: And your favourite street?

CC: I love Southeast Asian streets, where there’s a different sense of order and a lack of regulation. I know it’s not good for people with disabilities, but there’s something about the informal use of land that leads to an interesting and lively street. I love the streets in Phnom Penh, they’re overrun with so many different weird uses, and people use the street as their workshop, as true extensions of what they’re doing. They’re my favourite streets.

Cassandra Chilton is a principal at Rush Wright Associates. She has over 17 years of experience as a landscape architect, and has contributed to a range of public realm, streetscape, commercial and urban design projects, many of them award-winning. Cassandra is also a founding member of The Hotham Street Ladies, an artists collective whose work is regularly exhibited both locally and internationally.