While it might be a great place for the lawnmower to stretch its wheels, the suburban setback is otherwise long overdue for reinvention. Prompted by the need for greater density in our suburbs, a proposal by Officer Woods Architects does just that.

The suburban street setback is enshrined in most residential planning policies, including Western Australia’s Residential Design Codes. These dictate that all dwellings are constructed at a uniform distance from the kerb.

In low-rise suburban areas, the street setback is occupied by arid grass, wheelie bins, concrete driveways and buried conduits. Often as wide as a tennis court, it’s usually a lifeless expanse. At the property owner’s discretion, the semi-private space of the setback may be enclosed by a hedge, low brick wall or paling fence, or left to bleed out into the adjacent public “nature strip”.

Why does this space exist? What practical function or cultural role does it serve?

In his 1983 novel Mr Palomar, Italo Calvino explains that, while the suburban lawn itself is an “artificial object”, the “lawn’s purpose is to represent nature”.

However, according to Thomas Schumacher’s essay, Buildings and Streets: Notes on Configurations and Use (from the 1986 book On Streets), the primary purpose is not symbolic, but defensive. Schumacher writes:

The lawn does not function to enclose or define street space but only to isolate the street from the house. It is a no-man’s land, a miniature moat and city wall preventing access or use except at intervals.

Peter G. Rowe provides a third explanation in Modernity and Housing(1993). While the front lawn of the suburban house belongs to the owner, explains Rowe, utility companies and municipal authorities usually hold easements over multiple adjoining lawns in a complex interweaving of individual and collective ownership.

The origins of the street setback are virtually inseparable from those of suburbia itself.

The origins of the street setback are virtually inseparable from those of suburbia itself. In 1775, influential English landscape architect Lancelot “Capability” Brown was hired to work alongside his adversary, the architect William Chambers, on rebuilding Dorset’s Milton Abbey estate. Their client, Joseph Damer, had purchased the estate and adjacent 600-person town, and asked Brown and Chambers to relocate the town further away from his new home.

The new village was arrayed along a single six-metre-wide road. Broad grassy verges either side of the road created a separation of 24 metres between house facades.

The product of a compromise between proximity and privacy, between efficient planning and the picturesque, Milton Abbas established suburban parameters that have varied little in the 240 years since.

The 2011 Think Brick Australia About Face competition invited six architectural practices to demonstrate how brick could be creatively deployed in imagining “the future of the Australian suburb”. In response, Officer Woods decided to confront the underutilised space of the street setback.

Where others saw only a barren verge, the Fremantle architects envisioned a staging ground for suburban transformation. The Civic Suburb proposal reimagines setbacks as a place for gathering. 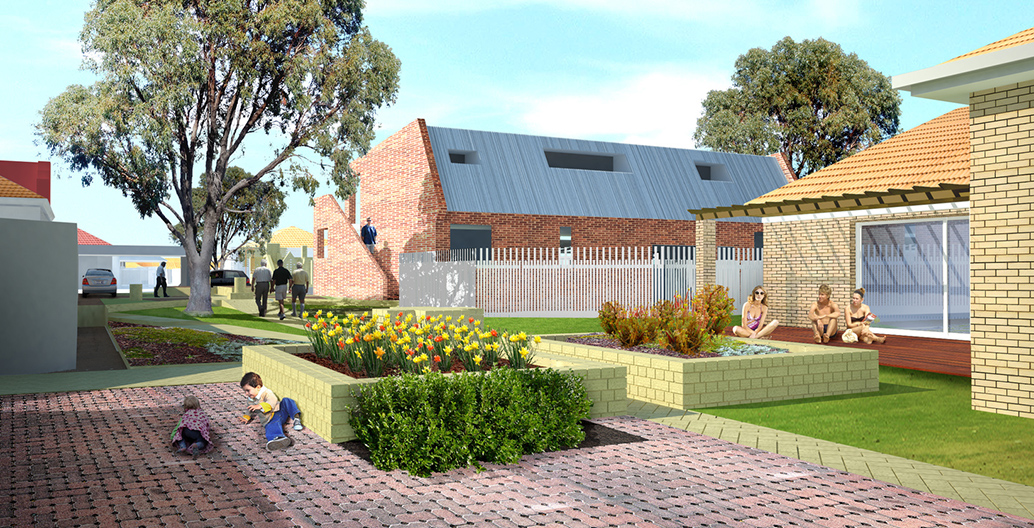 Nominally located in the Perth suburb of Melville but widely applicable, Civic Suburb proposes to insert roofed vehicular “forecourts” into the nature strip, alternating with walled communal gardens. When the cars are away, these forecourts act as flexible enclosures for impromptu neighbourhood gatherings.

By placing the cars on the street edge, Officer Woods shows how the concrete driveways of Melville’s battle-axe blocks could be reclaimed as linear green space. Empty garages could be converted into multipurpose “front rooms” housing shopfronts, living spaces, offices or granny flats. The separation of house and car also shrewdly anticipates the eventual obsolescence of the private automobile.

Finally, capitalising on the increased activity of commerce and street life, second-storey “suburban apartments” could be built on top of predominantly single-level homes. This would add capacity without diminishing valuable open space.

In line with the competition brief, the forecourts, walled gardens and front rooms of Civic Suburb are imagined in solid brickwork. These brick elements are depicted in a beguiling array of forms, patterns and hues. While it’s hard to imagine typical suburban denizens erecting such artful and elaborate structures, it’s important that we not miss the wall for the bricks. The significance of this project lies not in its aesthetic qualities, but rather its spatial and strategic dimensions.

If not for a handful of low-rise North American centres, Perth might be the least dense city in the world.

The escalating pressure of increasing populations, changing demographics and property speculation on the scale and character of Australia’s suburbs is matched only by the intensity of resident opposition. Sunlight and privacy are key concerns.

Anticipating this “not in my backyard” backlash, Civic Suburb doesn’t challenge the suburban backyard at all: it takes on the front yard instead. Most architect-designed suburban projects are clandestine additions at the rear, hidden from the street. Civic Suburb puts the area’s gradual transformation front and centre.

The value of such an overt strategy becomes clear in light of Perth’s current predicament. According to various metrics, Perth is Australia’s least dense city. If not for a handful of low-rise North American centres, Perth might be the least dense city in the world.

With this in mind, you might imagine how an expected doubling of Perth’s population by 2050 could transform the sprawling city into a model of dense urbanism. Instead, according to the Perth and Peel@3.5 million report, 53% of the 800,000 new homes to be built by 2050 have been allocated fringe greenfield sites.

The future Perth will look a lot like the present one, only larger and more spread out. Evidence of both political ploys and careless inaction, Perth’s increasing expansion demands alternative visions.

Underutilised suburban land could be intensified as an alternative to greenfield expansion without developers and consolidated lots.

Civic Suburb is a compelling proposition. It shows how underutilised suburban land could be intensified as an alternative to greenfield expansion and how this could occur without developers and consolidated lots.

An exercise in “do-it-yourself urbanism”, the project imagines an iterative increase in suburban density at the scale of the suburban plot – individual homeowners carry out the changes. It intensifies the use of existing spaces rather than relying on the acquisition of new land.

While Officer Woods did not specify how shared ownership of communal carports and street gardens would be negotiated (it was only a competition entry, after all), such mechanisms exist.

So-called “cluster planning” initiatives allow for the transfer of conventionally subdivided or publicly owned land into common property, owned and maintained by a collective body corporate.

Greater density might not mean an increase in built area.

The transfer of ownership from local government to private citizenry is no simple matter. And the atomised nature of suburbia itself embodies a general aversion to sharing, which will have to be overcome.

In the 1950s, when suburbs like Melville last underwent rapid expansion, an average household numbered five occupants. Today, that average has nearly halved. The result is a disconnect between outward appearance and inner reality. Walking down a typical suburban street, we encounter large, multi-roomed dwellings whose many windows do not reflect the number of occupants.

In this context, greater density might not mean an increase in built area. Instead, it could involve compartmentalisation into spaces better suited to smaller households and changing living conditions. A brave incursion into the no-man’s land of the street setback, Civic Suburb offers a compelling vision for incremental suburban transformation at the scale of the individual plot.

Grace Mortlock is lead designer at Other Architects and currently teaches in the  UTS Master of Architecture program.

David Neustein is a director of Other Architects and leads a UTS Master of Architecture design studio exploring new modes of interment, burial infrastructure and memorialisation.

The Conversation is producing articles with Future West (Australian Urbanism), by the University of Western Australia’s Faculty of Architecture, Landscape and Visual Arts. These articles look towards the future of urbanism, taking Perth and Western Australia as its reference point. You can read other articles here.