It’s been two months since Australia restricted access to public space in order to stop the spread of the novel coronavirus. While the country has adjusted to “the new normal”, it’s important that restrictions aren’t normalised and remain temporary.

Authorities have imposed significant restrictions on the size, purpose and location of gatherings in public space to slow the transmission of COVID-19. The massive impacts of these escalating restrictions over the past two months show us just how significant public spaces are for the life of our cities. A longer-term concern is the risk that living with these measures might normalise restrictions on, and surveillance of, our access to public space and one another.

Right now, public health is the priority. But access to public spaces was already significantly and unjustly restricted for many people before the coronavirus pandemic. Current restrictions could both intensify existing inequalities in access and reinforce trends towards “locking down” public space.

We must ensure these restrictions do not become permanent. And once the crisis is over, we also should act on existing inequitable restrictions.

“People without stable homes, and those with restricted access to domestic space, tend to live more of their lives in public. Public space restrictions have far greater consequences for these people.” – @kurtiveson

Unless public health interventions are enacted with an awareness of their profoundly uneven consequences, we may well “flatten the curve” in ways that add to existing inequalities and injustices.

Research suggests restrictions on public space have greater impacts on people who have less access to private space. People without stable homes, and those with restricted access to domestic space, tend to live more of their lives in public. Public space restrictions have far greater consequences for these people.

We can see this relationship very clearly: the restrictions are paired with instructions to stay at home. This applies to everyone. But, while it’s inconvenient for some, it’s impossible for others.

It’s certainly the case for the homeless. It will also be true of others. For instance, students may be living in crowded conditions in shared, family or informal accommodation, with no access to quiet private space for study.

This is why researchers and activists are demanding restrictions on public space be accompanied by provisions to make such people’s lives less precarious. Suggested measures include a moratorium on evictions and safe and free accommodation for rough sleepers. 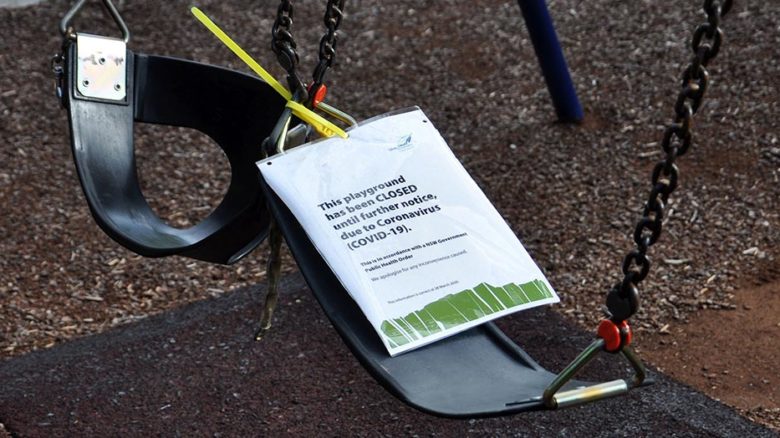 The closure of all park equipment disproportionately affects those with space-poor homes. Image: Blue Mountains Library The problems with discretionary policing that Australians are now encountering were already part of the daily experience of some targeted groups. Image: Elvert Barnes Temporary closures of parks and public space must be temporary. Image: Roxane Roth

Research also shows us restrictions on public gatherings and public space were a feature of everyday urban life for many people well before physical distancing came in.

Young people of colour who gather in small groups in public spaces frequently report being stopped, searched and moved on by police and security guards. People on low incomes were already excluded from commercial public spaces like cafes and shopping malls. People asking for spare change or leafleting passers-by were barred from quasi-public spaces that are subject to special restrictions. People who cannot climb stairs were unable to use basic public infrastructure, like train stations, that lacks lift or ramp access. The list goes on.

These pre-existing restrictions were the product of exclusion and injustice. We should not have tolerated this before the crisis and it demands our renewed attention after the crisis.

We also know authorities responsible for regulating public space, including police, tend to enforce rules and restrictions selectively. In New South Wales and Victoria, police chiefs have been explicit that police will use their discretion in enforcing current restrictions.

The problem is this use of discretion can be informed by stereotype and prejudice. For communities who already felt unfairly targeted by police, statements about the use of discretion will be far from reassuring.

‘Temporary’ really must be temporary

We must guard against a common tendency for temporary measures to become more permanent. Some of the extraordinary powers given to police to break up gatherings and fine people who fail to observe restrictions have been time-limited. But having been used once for a particular problem, the risk is such powers might be enacted more often in future.

We have seen this happen with closures of public space for commercial events. Each closure is justified as being only temporary, but such closures have become increasingly common. The cumulative effect is a creeping commercialisation of public space.

One can also see how “temporary” experiments with digital surveillance to slow contagion could become permanent. Tech corporations are offering analyses of mobile phone and other data to profile public activity and to trace the movements and contacts of individuals who have contracted the coronavirus.

It’s the latest step in the datafication of urban everyday life. This process erodes privacy and grants more and more power to corporations and governments. It is easy to see how “contact tracing” could also be applied to protesters or stigmatised minorities.

Normalisation of restrictions must be resisted

Coronavirus-related restrictions are obvious to us because they have been imposed so rapidly. However, we should reflect on how other restrictions have become normalised precisely because they happened gradually, making them less visible and contested.

For example, over the past decade we have seen a creeping “gating” of a public spaces like parks and school ovals. Free access to those spaces has been greatly reduced when they are not in use for organised education or sports.

Interestingly, as urban authorities try to provide large populations with access to public spaces in which they can maintain recommended physical distance, some existing restrictions are being rethought. Cities are closing streets to cars to give pedestrians more space rather than having to crowd onto footpaths. It will be interesting to see if such measures persist once physical-distancing restrictions are lifted.

Let’s hope our experience of the inconvenience and frustration of restricted access to public space will translate into a more widely shared determination not only to end these restrictions when the health crisis is over, but also to act on the unjust exclusions and restrictions that were already a feature of urban life.

As with so many other aspects of our society, it is not enough simply to go back to how things were before. We must ensure our public spaces are not unjustly restricted when the next crisis comes along.