The politics of pop-ups: tactical urbanism in post-quake Christchurch

After natural disaster devastated Christchurch in 2011, the city became a test-bed of sorts for “tactical urbanism”, a new form of activist city-shaping that makes a merit of temporary intervention. Nearly eight years on, Barnaby Bennett considers the long-term legacy of these short-term projects.

It has been almost eight years since a series of violent earthquakes struck the city of  Christchurch, New Zealand over an 18-month period between September 2010 and late 2011. The quakes killed 185 people, led to the demolition of 70% of the central city, and damaged most of the infrastructure and housing in the city. Much of the city is finally starting to move on from the trauma and chaos of those early years. But much of the damage caused by the quakes remains and their political impacts continue to affect the long and slow recovery.

The earthquakes set into play a plethora of complex crises and problems. The challenges of participatory planning, ground conditions, repair of heritage, insurance, new building codes, investment, and all the political machinations you’d expect around these issues played out in a balancing act between the desire to rebuild quickly and decision-making with an eye on the long term.

In the midst of all of this, strategies that we might describe as “tactical urbanism” came to assume an outsize role, providing both a relatively inexpensive and temporary means of bringing much needed activity and infrastructure back to the city while also addressing long-term concerns. Post-quake Christchurch, then, offers important clues in understanding the potential of tactical urbanism as an urban development approach, not just in this context but in cities around the world.

New York-based planner Mike Lydon is believed to have introduced the term “tactical urbanism” in 2010, the same year as the first earthquakes began in Christchurch. Lydon and Anthony Garcia co-wrote the 2015 book Tactical Urbanism in 2015. Lydon participated in Christchurch’s Congress of Adaptive Urbanism in 2014 and projects from Christchurch feature in the book. The subtitle of the book, Short-term Action for Long-term Change, illustrates the political intention of tactical urbanism – to use small, cheap, unthreatening, and temporary projects to unlock more expensive, permanent, and progressive changes. 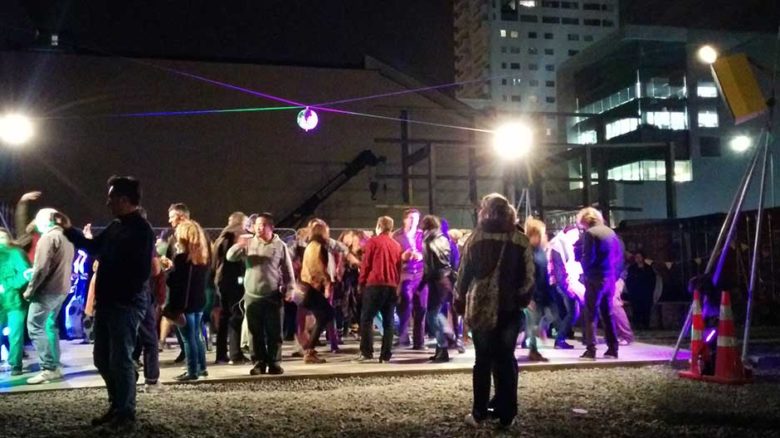 Because tactical urban projects are relatively simple, they create opportunities for public engagement and expression. This creates a new kind of public action. In addition to the conventional managers of the built environment like property owners, the state, and associated experts are newly empowered citizens, users, publics, amateurs and small NGOs.

For these groups, the street plays a number of important but sometimes conflicting roles: as a site of intervention; as the public network through which members of the public engage with each other and acts of tactical urbanism; as a space of conflict between short- and long-term goals; and as the place in which the public views and experiences the expenditure of long-term private and public capital.

In Christchurch, the impact of the quakes amplified the distinction between the short and long-term goals. The city faced specific short-term problems generated by the quakes, but decisions about the rebuild were also clearly going to affect the next 100 or so years of the city’s infrastructure and identity. In this context, tactical urbanism gave residents the opportunity to participate in and lead temporary projects, ostensibly in response to the problems caused by the earthquakes, while also attempting to affect and influence the re-imagining and re-planning of the city in the long-term. The temporary projects were implemented and performed on or near the city’s streets as sites of public activation, but the long-term considerations were often about how public spaces, including streets, should be used and distributed. These manifest in frequent debates about urban questions: should public land use prioritise movement through private cars, public transport, or cycling and walking? Is the participation of people in the imagining of a city’s future an ideological or practical exercise? Should the planted landscape reflect a place’s colonial or indigenous patterns of inhabitation? Are commercial, global qualities more valuable in the design of a city’s built environment than those qualities that might make it unique?

Hundreds, if not thousands, of temporary projects emerged in the years after the earthquakes. My research suggests that among this broad response there are three kinds of tactical urbanism operating, each illustrating a different relationship between short- and long-term goals and thus having a different political character.

First, there are those temporary projects that acted to simply restore function, provide basic amenity, and address emotional issues related to mourning and memory of the old city.

These projects directly addressed the post-disaster problems of the city, and were not, at least, intentionally oriented to the larger questions that the quakes brought up. These were widely celebrated and slowly disappeared as the city recovered.

Examples of these included larger government-led temporary projects, like the city’s temporary stadium, temporary libraries, and temporary bus exchange. Smaller examples included the many memorial and remembrance projects; the activities that involved cleaning up, tidying and ordering the damaged city; council-led street activation projects through temporary furniture and colourful painting; and other visual art and sculptural projects that brought entertainment, visual activity and moments of healing to the city.

Second, there are the temporary projects that operated within existing habits and infrastructures of the city, but that made propositions in relation to these that altered, nudged or adjusted behaviour in some way. Like the first set of projects, these responded to the immediate needs of the post-quake city but they did so in an experimental or propositional manner. They often used the provision of an amenity in response to a problem, as a way to engage with a larger networked or infrastructural issue, and as a way to draw public attention to an going public controversy or long-term problem. When successful, these projects have remained in the city or translated their experiment into a new behaviour or habit.

“These projects were not designed to become part of the city, but instead to provoke discussion” – Barnaby Bennett, @mrbarnabyb

A good example of this is a project called RAD Bikes, which is an ongoing mobile bike repair shop that provides tools and training to repair bikes. On one level, it’s a reasonably simple volunteer run service that supports the city’s existing cycling infrastructure. On another, it’s public presence, on temporarily available and highly visible public sites, advocates for the prioritising of cycling and the repair and care for materials. In this way, it makes the street a contestable space, and continues to operate five years later as an established part of the city.

Similarly, the New Zealand’s Department of Conservation and a small post-quake NGO called Greening the Rubble worked together on a temporary garden called Nature Play Park. Ostensibly about giving children a reason to come into the central city, this project was also part of a larger cultural conversation about the kind of planting that should be there. The park was entirely made from native plants, included running water and boasted various kinds of ecological domains, demonstrating to citizens how a ‘native’ park might look and feel. In this way, it offered children a place in the city, while also raising questions in relation to the decolonisation of the landscape.

Another example saw local urban regeneration organisation Gap Filler build a public dancefloor in the city, with speakers powered by a coin-operated washing machine. The Dance-O-Mat was a way to bring life, activity, and colour into the city. On another level, though, it’s a statement about public participation, highlighting the value of creative activities in the city and the importance of giving members of the public creative control over them.

A final example includes the city’s Festival of Transitional Architecture (full disclosure: I am the creative director of the main event for FESTA in 2018). This festival offers citizens the opportunity to experience large scale installations, music, food and a festive atmosphere in new parts of the city as they are re-opened to the public. Simultaneously, each of the festivals presents a provocation to the city around issues of participation, density, identity and waste. This year’s will also look at the relationship between food and the contemporary city.

The third group of temporary projects are those that presented radical propositions for the city’s future in a way that disrupted or confronted existing habits and patterns. These projects tried to provoke, agitate or prompt responses in relation to specific, complex issues. While they often still engaged with some kind of provision or function, this was clearly secondary to the provocation that motivated the projects. In the immediate post-quake context, these projects were much less common, in part due to the presence of more immediate and urgent needs. Like the first group, these projects were not designed to become part of the city, but instead to provoke discussion.

Examples of this include a Gap Filler project called the Inconvenience Store. With the logic of convenient malls and shopping experiences beginning to dominate the rebuild, this initiative provided artists with an empty commercial space and the challenge of creating inconvenience. A range of novel customer experiences were the result, from making customers wait for a certain amount of time relative to the distance travelled by their goods, to forcing them to create and craft their own goods or participate in treasure hunts. While the project was situated within infrastructures of shopping and commerce, it tested propositions about the value of convenience and the joys of taking the long way home.

“Unlike the conventional interactions with politics that occur in parliaments and newspapers, tactical urban projects take place in streets and public places” – Barnaby Bennett, @mrbarnabyb

Eyes on the City was another radical project, which used a mobile grandstand designed by Gap Filler to introduce lunch time audiences, through a curated series of talks and discussions, to a particular issue or problematic site in the city –  literally exposing the problem to people by sitting them right alongside it, while it was discussed.

The three approaches described above can be seen as forms of tactical urbanism that provided the people of Christchurch with unique opportunities to open up debate and discussion about larger and more profound issues, while also addressing short-term needs. Christchurch is a unique story, but each city has its problems and issues. Unlike the conventional interactions with politics that occur in parliaments and newspapers, tactical urban projects take place in streets and public places – and, unlike much of the activity within these latter forums, they result in immediate, tangible experiences that have the potential to shift public habits and behaviours.

Barnaby Bennett is the publisher and co-editor at Freerange Press. He is an award-winning designer and is currently completing a PhD at the University of Technology Sydney that examines public and temporary architecture in post-quake Christchurch.