As the world’s weather patterns appear ever more unpredictable and subject to extremes, the search is on for urban design solutions to help protect cities from the resulting floods and heatwaves. Driven as much by local municipalities as by national governments, a number of design initiatives, workshops and competitions have emerged around the world, promoting urban environments that are resilient and climate adaptive. A good example is the Nordic Built Cities Challenge.

The 2016 overall winner is a proposal from Danish urban development consultancy SLA, whose proposal for the Copenhagen district of Nørrebro presents an ambitious plan to manage an increase in frequency and extent of sudden and heavy rainfall. The submission focuses on a long slice of the city, starting at Hans Tavsens Park and stretching along Korsgade, down to Peblinge Lake, and is distinguished by two key elements.

Firstly and most importantly, the proposal establishes an innovative approach to water management. Three distinct approaches to water management are proposed. Rain water will be collected in tanks across the entire area for use by by local residents. That is the everyday component of the design proposal.

In response to heavy rainfall, Hans Tavsens Park will be fitted with 18,000 cubic meters of ‘delayed volume’ at ground level, so that storm water can be purified and delayed before discharge via discharge pipes into the lake. When storms threaten to flood, rain water will be directed at ground level along a retrofitted Korsgade, down to the Peblinge Lake.

This is not, however, simply an civil engineering solution: it is also an ecological one. This kilometer of city, from the park to the lake, will serve as an elongated, circular water purification system, purifying not only the rain but also the lake. Combining natural biotopes with advanced natural filtering and pumping techniques, this system will purify rain water, removing nutrients and phosphorus, as well as suspended solids and metals. When not dealing with storm and rain water the system will be pumped with lake water, as a year-round water feature that simultaneously cleans the lake. 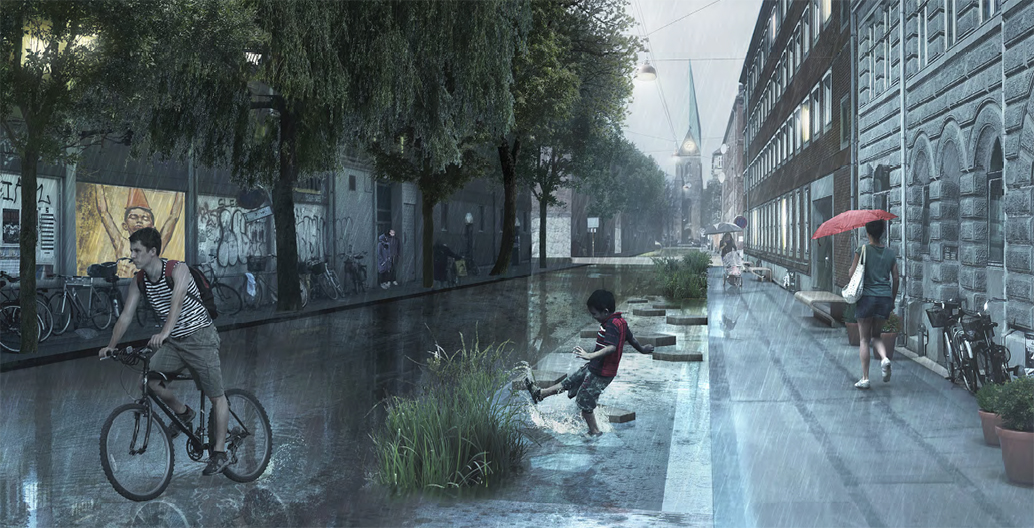 In the suburb of Korsgade, design practice SLA have proposed a year-round water garden. Image: SLA. 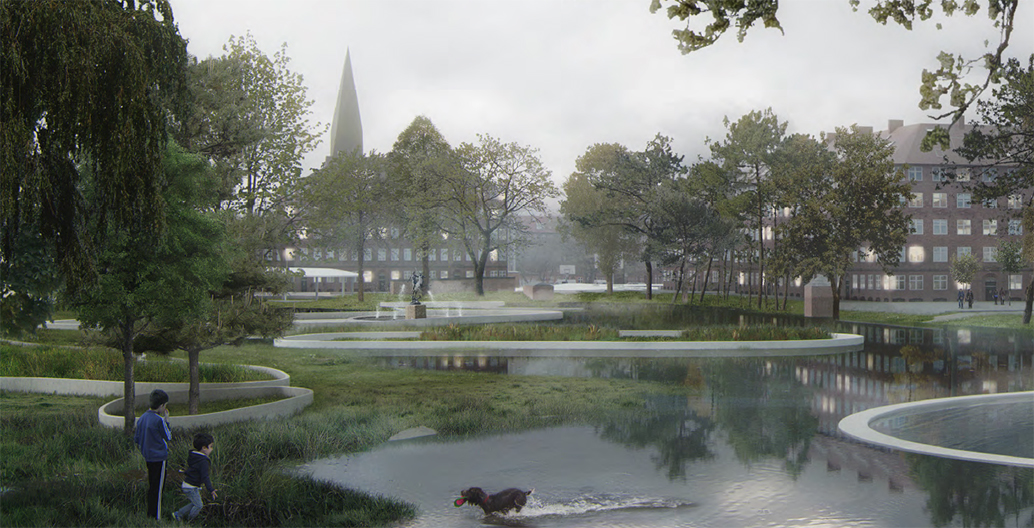 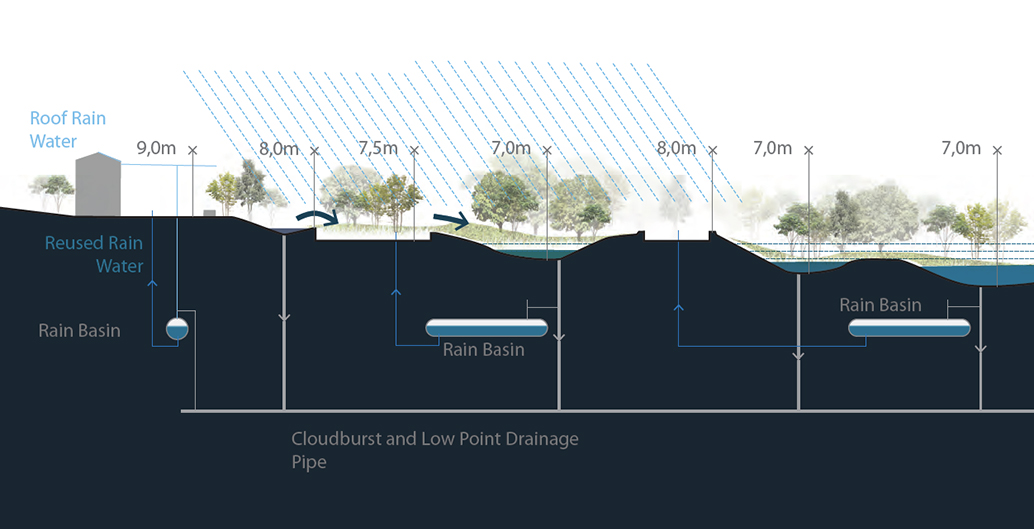 A section detail of the water management infrastructure in Copenhagen's Hans Tavsens Park. 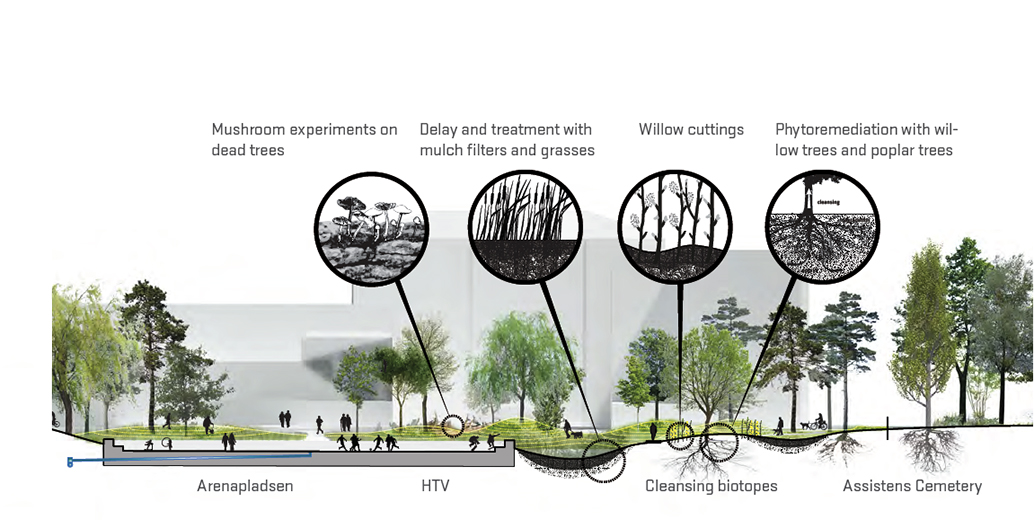 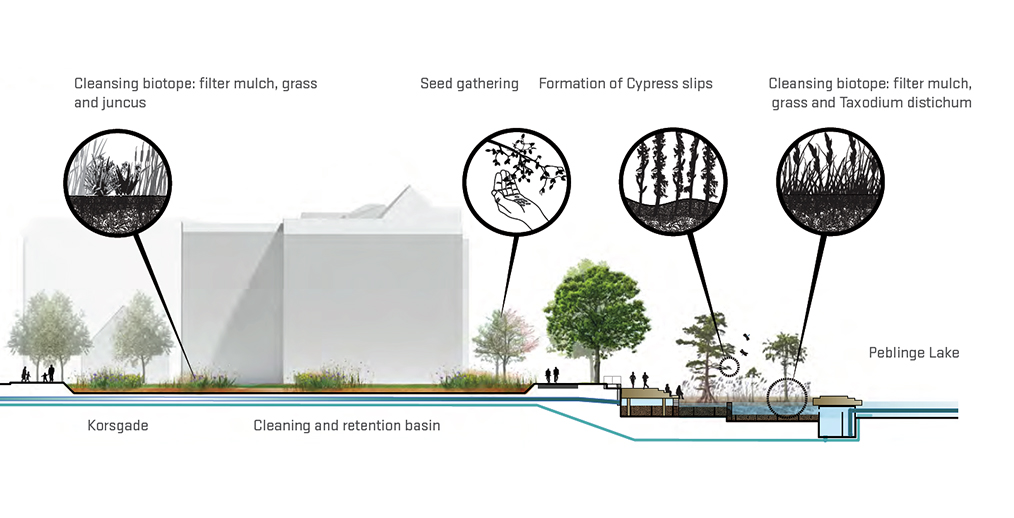 Filter mulch, grass and juncus cleanses water prior to release into Peblinge Lake

This kilometer of city, from the park to the lake, will serve as one elongated, circular water purification system

Secondly, notwithstanding the hydrological infrastructure embedded along Korsgade, the ‘Soul of Nørrebro’ otherwise proposes an ‘open form’ for Hans Tavsens Park, to be appropri­ated for spontaneous and temporary events and to develop organically, according to the wishes of the community and its users. It is proposed that residents, from young children to older Nørrebro citizens learn to be active co-creators.

To facilitate this, a new institutional focal point is proposed. FABLAB for City Nature is an urban ‘exploratorium’, placed be­tween two local schools, where different stakeholders develop new sustainable means to take action. At the same time, the outside areas surrounding the schools will be reinforced as social gathering points, through the activation of pupils, institutions and creative crafts. This social infrastructure is considered as critical to the project as the hydrological infrastructure on Korsgade.

As an integrated whole, ‘Soul of Nørrebro’ represents a commitment to bringing together hydrological, biological and social cycles. In announcing the award the jury commended the proposal as ‘a social process involving local stakeholders with the purpose of creating ownership, co-creativity and a sense of community. The proposal breaks new ground and has development and export potential though a smart application of technical, cultural and social values’.

The Nordic Built Cities Challenge Award is an ambitious competition that sits somewhere between an ‘ideas’ competition and a ‘project’ competition. It aims to find, then promote, innovative design proposals addressing contemporary urban problems, in a partnership between Denmark, Finland, Norway, Iceland, Sweden and the Faroe Islands. It is unusual in inviting design responses to six distinct competition sites across six cities. 145 submissions were received in late 2015, with 24 finalists selected to further develop their proposals: four for each site. this was further reduced to six ‘local winners’ in July, with each team engaging directly with municipal authorities to further develop their winning submission. SLA was announced the overall ‘Nordic winner’ at the Nordic Built Cities Challenge Awards on 3 November at DR Koncerthuse in Copenhagen.

While the competition does not guarantee that the overall winning submission will be built, this year’s winner has indeed been granted a budget of 140 million DKK (27 million AUD), with construction due to commence in 2019 and completion due by 2022.