As rising seas threaten Jakarta, Indonesia’s government is deserting its capital for a new city on the island of Borneo, at vast economic and environmental cost. As filmmakers Etienne Turpin and Nashin Mahtani explain, behind this plan’s seemingly brutal necessity, perverse incentives are at play.

This is an abridged extract from Kerb 28: Decentre. Kerb is an annual cross-disciplinary design journal produced through the department of landscape architecture at RMIT University School of Architecture and Urban Design. Click here to order your copy.

On 26 August 2019, during one of the first major announcements of his second term as president, Joko Widodo confirmed rumours that Indonesia would move its capital from its sprawling current location along the northern edge of the world’s most populated island, Pulau Java, to the province of East Kalimantan on the neighbouring island of Borneo. According to various studies and assessments, the so-called Capital District of Indonesia, known as ‘DKI Jakarta’, required relocation to address two major issues: chronic seasonal flooding during the Southeast Asian monsoon and excessive land subsidence due to rampant but unregulated groundwater extraction. As one island subsides, another is being mapped as a refuge for carefully selected survivors. In what follows, we explore how this attempt to govern from outside the crisis exemplifies current capitalist reactions to climate change.

Although it is clear that the dynamics of atmosphere, land, and water do not obey geopolitical borders, like politicians, designers have yet to fully develop the capacity to attentively engage with the multiple scales of spatiality and temporality that anthropogenic climate change requires. More frequently, design professionals are complicit in and profit from their willingness to perpetuate illusions of escape and separation. As part of our ongoing documentation of both the psychosocial and geophysical aspects of capital relocation in Indonesia, we offer this brief case study of climate change escapism in order to examine accumulation in the making.

By considering the concepts of enthusiasm and abandonment as they play out in the political economic arguments for a new capital and limitless capital accumulation, we try to elucidate the entangled registers of imagination and materiality in the administration of volatile environmental and political bodies. Engulfed as we now are among the vicissitudes of disaster capitalism, how can we design for emergent political geographies otherwise?

Folded into the narrative of this spectacle that will ‘save the city’ are well-crafted ambiguities regarding who or what is being saved, at what cost, and to whom.

When Jakarta’s reputation as the ‘fastest sinking city in the world’ began going viral, narratives of ecological crisis were quickly embraced as a means to transform climate risks into investment opportunities. In response to increasingly frequent inundations of the capital city, the National Capital Integrated Coastal Development Plan (NCICD) proposed to address the challenges of subsidence by reinforcing the existing coastal seawall and constructing a new 40-kilometre, 25-metre-high, outer seawall for additional protection against oceanic and tidal forces and sea level rise. At an estimated cost of $40 billion USD, the expense of the seawall would be partially recovered through real estate investments on 17 reclaimed islands constructed to resemble the figure of the country’s national symbol—a mythical eagle—the ‘Great Garuda’.

The promotion of the Great Garuda evinced a motley enthusiasm: Dutch engineering expertise, ideologies of development and investment, nationalist imaginaries, and, of course, the requisite images of a luxury water world meant to naturalise speculative urbanisms and the cruel spectacle of technological infrastructure as a self-evident solution to increasingly volatile climatic fluctuations. The rhetoric of climate adaptation, urgency, and risk is aggressively employed to justify the implementation of previously blocked development plans, now made permissible with the language of ‘crisis’. The language of risk becomes a ruse, used by contractors, consultants, and politicians to exonerate new infrastructure for the accumulation of capital at any cost.

Folded into the narrative of this spectacle that will ‘save the city’ are well-crafted ambiguities regarding who or what is being saved, at what cost, and to whom. Which spaces are cleared for the purpose of accumulation? Those rendered eligible and legible in a homogenised form of urban success that hinges on reductionist economic valuation seem pleased by the investment opportunities. Yet, as the Great Garuda becomes mired in lawsuits and controversies related to corruption, money laundering, and forged environmental assessments, the project has repeatedly stalled, thereby initiating its own microclimate of performative uncertainty. Somehow, the images prevail: renderings of gleaming white buildings—generic in their form but clearly differentiated from the diverse textures and qualities of life that make up the city as it is—reorder the coast with a formidable array of empty investment shells. Workers on a bamboo platform take sea floor measurements of Jakarta Bay in front of the massive Regata Development Complex in North Jakarta. The location for the new capital, Borneo. 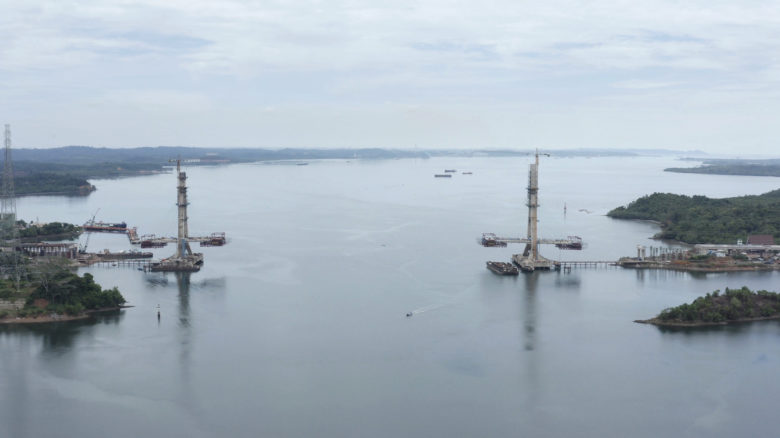 The Trans-Kalimantan Expressway Bridge under construction south of Balikpapan, Borneo. 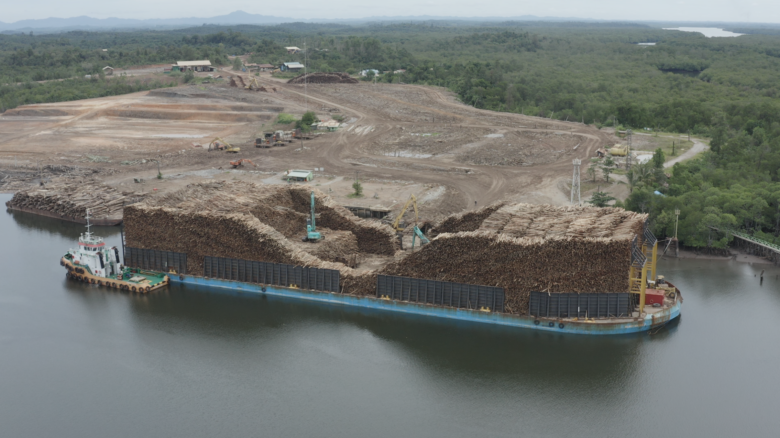 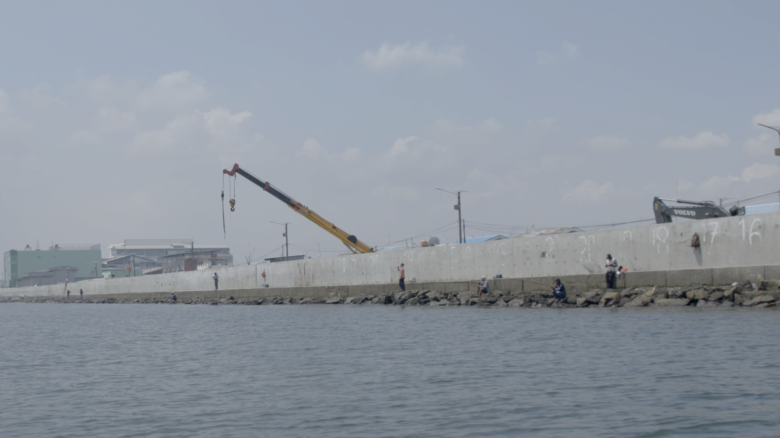 On December 17, 2019, a 170 metre section of the National Capital Integrated Coastal Development seawall collapsed into the Java Sea. As only the very first section of a US$40 billion project supposedly designed to protect the city from oceanic forces for (at least) the next 80 years, the engineering project succumbed to massive failure just a few years after commencing construction. Notably, the first section that collapsed was being built from land along the coast; however, much of the 40 kilometre wall is planned for construction directly in the ocean.

The spectacular failure so early on in its execution led some to question the design of the project as a whole. Heightened concerns over the accuracy of engineering calculations and questionable construction protocols were silenced by a ministerial statement assuring residents that future construction would be safe and secure. So the project continues—or, more accurately, begins again—unperturbed by the forces of the sea, the differential sinking of the soil, and the chorus of activists and concerned residents who oppose the development.

In February 2020, a new wall was already under construction behind the collapsed section. Groups of young workers operated their drilling machines with a calm serenity next to the massive slab of concrete laying along the shore like some colossal drowned corpse. If it can indeed be built, the Great Garuda will be realised one foundation piling after another, notwithstanding the possibility of additional calamitous engineering failures (and access to cheap hydrocarbon energy permitting). The occurrence literally lays bare a mode of accumulation taken to the point of collapse; failure is used to justify the very same operations that induced it.

The repetition-without-difference of failure and abandonment are not unique to the seawall; indeed, the looping choreography of construction and collapse is a core requirement for the flow of capital. As one wall collapses, the injection of additional procurement processes, bids, contracts, and materials are easily justified; every time the cycle repeats, so do the potential opportunities for officials and businessmen to skim portions of each contract in bribes and other laundering schemes. Because abandonment and failure are key parts of this lucrative construction cycle, no additional protocols are set in place to adjudicate claims or ensure project management—none are needed, because the aim of these projects is the ceaseless circulation of material (especially sand, concrete, steel and glass) and money. As real as any of these construction sites may appear, and as massive and overwhelming as they are in relation to any individual human body, it is imperative to understand that the majority of this construction is merely a secondary process that enables the accumulation of capital to take place elsewhere. This fact is instructive: abandonment and failure are integral parts of the process of accumulation, and not, as is so often assumed, contrary to or at odds with the objective of capitalism: accumulating capital.

Despite the collapse of the first section of the seawall, and the recently released Special Report on the Oceans and Cryosphere, authored by the UN’s Intergovernmental Panel on Climate Change, development along the coast continues unabated. The group of reclaimed islets that will comprise the commercial section behind the seawall also remain under construction; in May 2020, the Indonesian president refused to halt the process even though environmental activists have repeatedly pointed out the danger they pose to the sensitive ecosystem of Jakarta Bay. The historian Abidin Kusno has referred to the processes of coastal development as ‘green governmentality’, noting how environmental discourses are appropriated as a way of reframing wealth inequality and the uneven distribution of environmental risks and benefits.

Etienne Turpin is a philosopher living and working in Berlin.
Nashin Mahtani is an architectural researcher and designer, investigating the interplay of software aesthetics, ecological governance, and social behaviours to advocate for environmental justice.

Nashin and Etienne are currently working on a new film, Tidak ada Kapital [There is No Capital], which documents the processes of accumulation and abandonment at stake in the relocation of Indonesia’s capital city from Java to Borneo.